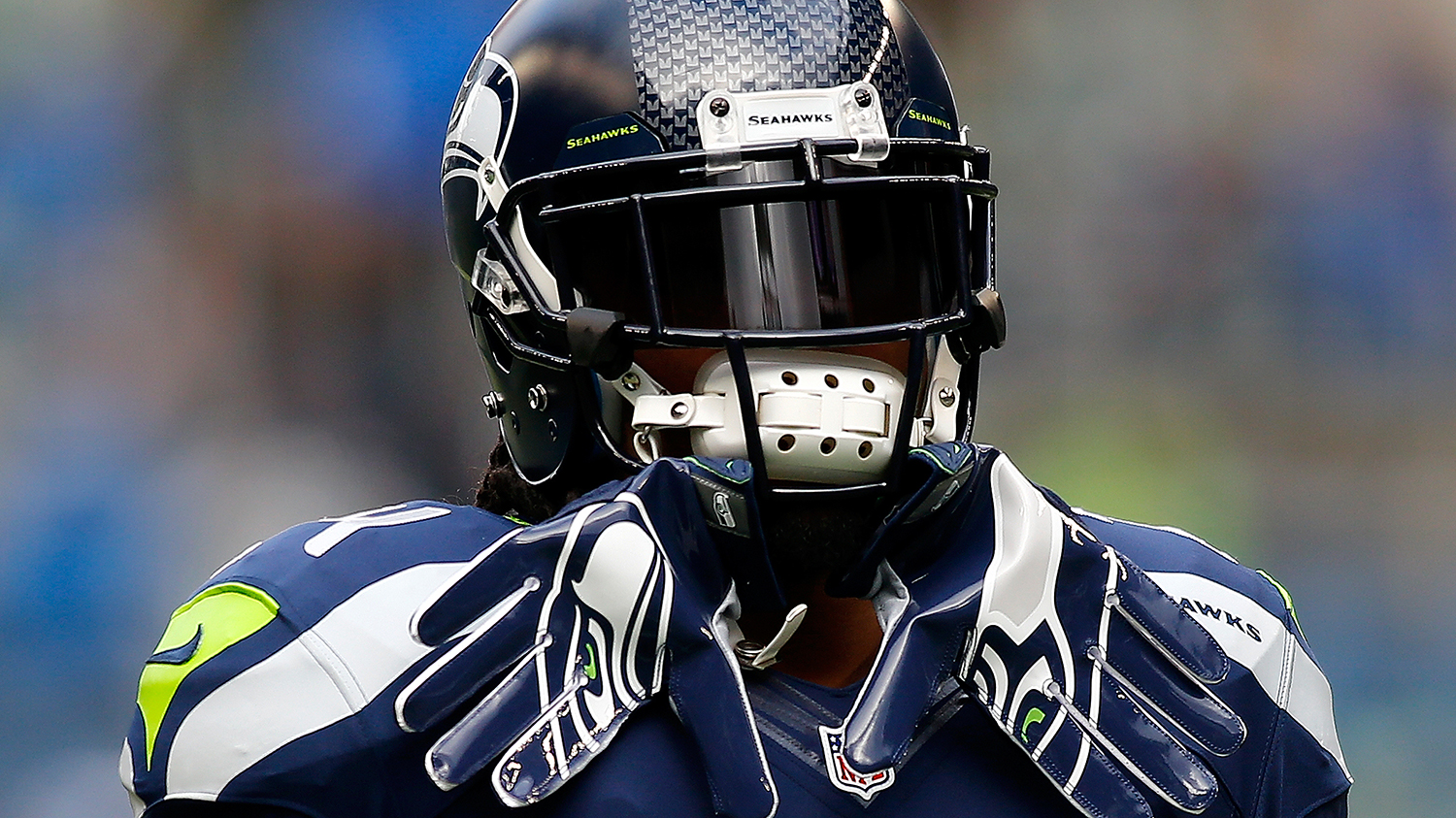 Has any nickname ever fit any human better than “Beast Mode” fits Marshawn Lynch?

Sometimes he’ll be running and it’ll seem like he’s cornered, and then he’ll just run right through whatever defenders looked like a problem. He finds cutback lanes that shouldn’t exist, he almost always falls forward for an extra few yards when he goes down, and as the game unfolds and the defense gets tired, he only gets better. Beast Mode.

On any given play, he can go from a regular running back to some kind of hulked-out superhero flying into the end zone. Beast Mode.

It’s not just your imagination if it feels like Marshawn Lynch never gets brought down by just one guy. As Danny Kelly wrote for SB Nation this week, Lynch broke 101 tackles in 2014, the most since Pro Football Focus started tracking that stat eight years ago. In the NFC Championship Game against the Packers, he was the most dominant player on either team. He forced a playoff-record 15 missed tackles, and 110 of his 157 yards came after contact.

When Green Bay was up, he kept Seattle alive. When Seattle started to come back, it was because of Lynch — eating six and seven yards at a time, scoring touchdowns, and opening up all the read-option throws that eventually brought Russell Wilson back from the dead. Lynch put the team on his back.

Nobody should be strong enough to run over defensive linemen this often, and anyone who’s even close shouldn’t be fast enough to also run around safeties and linebackers. No player who launches himself into defensive lines close to 300 times a year should be able to do this for eight seasons without losing anything. NFL running backs are supposed to be going extinct. How does this one keep getting stronger? 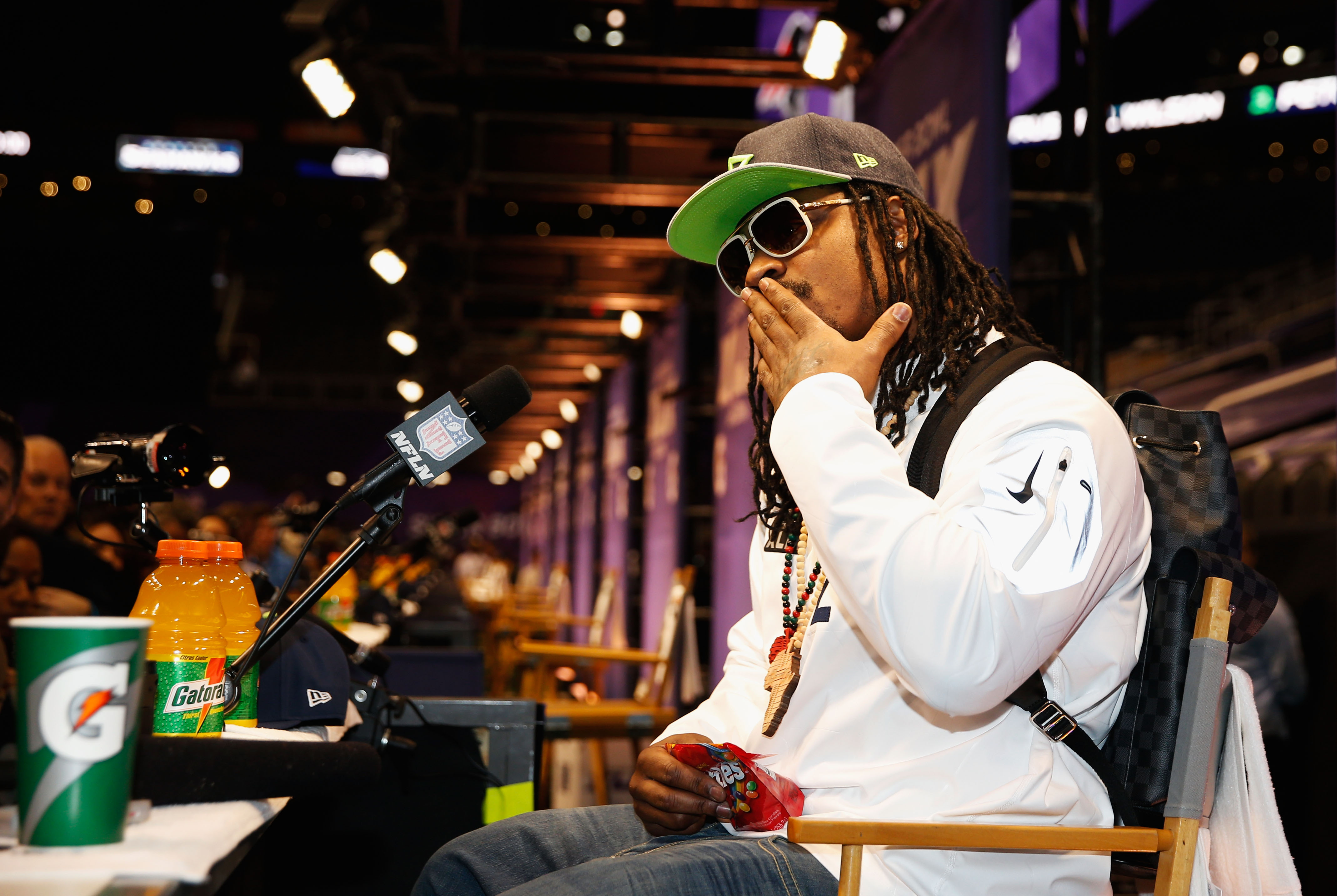 Now let’s talk about what he’s like off the field. What’s amazing about anyone complaining about Lynch’s media boycott is that nobody in the NFL has given us better quotes than Beast Mode.

“I’m just ’bout that action, boss,” he said at last year’s media day. “I ain’t never seen no talking win me nothing.”

Last year, Deion Sanders asked him, “You don’t like podiums, do you?”

Deion: “What is your thing?”

Lynch: “Lay back, kick back, mind my business, stay in my own lane.”

What does his dog do during Seahawks games? Does he watch him play?

Yesterday, he showed up to face thousands of reporters and said, “I’m here so I won’t get fined,” 29 times in a row. Anyone who can read that sentence without smiling is taking all this far too seriously.

The only real downside of Lynch’s silence turning into media day’s biggest story is that it obscures his actual story. It’s one of the more incredible tales we probably won’t hear this week.

He was one of four children growing up in an Oakland neighborhood full of drugs, prostitution, and shootings. His father was around the neighborhood, and Lynch would see him sporadically, but his dad refused to raise him. He made it out anyway, turned into a local legend, and earned a scholarship to Cal, where he had a 3.2 GPA before he went pro and became a millionaire.

He’s been in trouble, too. He had his driver’s license revoked in 2008 after striking a pedestrian with his car in Buffalo, and he was suspended for three games a year later when he got arrested for possessing a firearm. He also got arrested on a DUI charge in the summer of 2012, spending the night in jail hours before the start of a free football camp he was hosting for Oakland kids.

A few years ago, E:60 profiled him. Presented with a list of his transgressions and asked what he thought of the people who claimed he was a thug, he laughed and then went silent for a few seconds.

“I would like to see them grow up in project housing,” he said with his voice wobbling. “Being racially profiled growing up, sometimes not even having nothing to eat, sometimes having to wear the same damn clothes to school for a whole week. Then all of a sudden a big-ass change in their life, like their dream come true, to the point they’re starting their career, at 20 years old, when they still don’t know shit. I would like to see some of the mistakes they would make.”

Now Lynch is trying to help the place that shaped him. In 2012, Alan Shipnuck detailed the genesis of Fam 1st Foundation, the organization Lynch founded to help his neighborhood. His plan for the foundation is to open and run a youth center there.

As he explained it in 2012: “The main component we want to teach is basic life skills I feel a lot of kids are missing: how to balance a checkbook, create a résumé, how to fill out a job application, how to speak with confidence one-on-one.”

For now, his foundation gives away hundreds of turkeys in Oakland every Thanksgiving. On Fridays before home games, Lynch invites underprivileged children to meet him and tour the Seahawks facility. And he still hosts that free football camp every summer.

None of this is proof that Lynch is some kind of saint, but he’s never pretended he is. That alone makes him more honest than dozens of professional athletes.

It would be nice if Lynch told the media this week about his foundation or his summer football camps or all the dreams he’s fulfilled the past few years, but maybe this is better. What we know about Marshawn Lynch already makes him more three-dimensional than almost anyone else we’ll hear from over the next few days.

He’s the guy who parks his Lamborghini behind velvet ropes and stops for pregame doughnuts in a “Fuck You” sweatshirt. He’s the guy who made it out of Oakland, grew up, and then went back to help. The same guy who grabs his crotch after touchdowns is dreaming of a program that will help teens learn how to craft a résumé. In the meantime, he doesn’t care what anyone thinks. That’s what we know.

Also, this: After his mother gave birth to him 28 years ago, the midwife told her that she may have had a twin that died in utero.

“They just knew that Marshawn was living off two placentas,” his mother told USA Today. “She told me that with that, he may be an amazingly strong child.”

“I think race plays a role in how he is perceived,” ESPN’s Kenny Mayne told Robert Klemko for a Sports Illustrated piece in December. “If he was a white country boy with long hair and a happy-go-lucky attitude, but wouldn’t talk to media, he’d be one of the NFL’s great characters.”

But he already is one of the NFL’s great characters.

For everything he does on and off the field, he’s every bit as adored as someone like Rob Gronkowski. The second he finished speaking-but-not-speaking at media day on Tuesday, there were five people celebrating him for every one person criticizing him.

Sure, the league office will remain his enemy for the rest of his time in football, but everyone hates the league office. A handful of grumpy sportswriters will never forgive him for exposing how meaningless most media interactions really are. And there will always be comment sections full of backlash, calling him all the names sportswriters and the league office wish they could. But at this point, anyone who hates Marshawn Lynch is telling you more about themselves than Lynch.

The rest of us can just enjoy this.

Whatever battle his critics were fighting, they lost. For every fine, there’s now another endorsement deal and more money going to his foundation in Oakland.

He’s been in Seattle for only five years, but has been so good in that span that he is already guaranteed to leave a lasting legacy. He’s a borderline Hall of Famer right now. After rumors early in the year that the Seahawks would cut him after this season, now there are rumors of a raise this summer.

There may be an impulse to defend his reputation this week, but I’m not sure that’s necessary. All the people worth listening to are saying the same thing.

Pete Carroll: “I don’t know if anything is more symbolic than what we’ve done with Marshawn and him playing the way he’s played and him being the guy he is. I think he really is the key element to putting this thing together from the attitude perspective at least.”

Bill Belichick: “Lynch is a tremendous back. Best back we’ve faced. He does everything well. He’s got great balance, great power, vision, instincts, he’s great in the open field, he gets tough yards around the goal line, third down.”

Kam Chancellor: “He’s a great teammate. He’s fun, he’s active, and he’s hilarious. He has great advice. If you are in need of advice or are ever going through something you can go to Marshawn and talk to him. He’ll give it to you straight, clean cut. It’s going to be real and that’s some great advice.”

Vince Wilfork: “Hands down, I think he’s the best. He’s proving it in the passing game, running game, blocking, you name it. I don’t think there is any other running back out there that has that many explosive runs, yards after contact. He is exactly what his name is called: Beast Mode.”

Seahawks center Max Unger: “He’s one of my all-time favorite players I’ve ever played with. He’s just like an awesome guy, totally cool locker room dude off the field.”

Patriots linebacker Dont’a Hightower: “Everybody kind of looks at Lynch and thinks that he’s just an aggressor that wants to run everybody over. That might be his game, but I see it as both. He’ll run you over to get where he wants to get, but you’ll never see him run out of bounds. He’s always looking to cut back and make those big plays, those 80-, those 70-yard touchdowns that you’re going [to] see. He does everything.”

Seahawks tackle Justin Britt: “Everybody’s like, ‘Where’s he going to go? Am I going to have to be the one to tackle him?’ People don’t want to tackle him. They don’t. Watch the Giants game.”

49ers safety Antonie Bethea: “That team thrives off the way he runs. You know he’s a serious player when your defensive coordinator tells you before the game that it will take all 11 of you to get him down.”

Seahawks defensive end Michael Bennett: “I saw supposedly some of the best players in the league not want to tackle Marshawn Lynch.”

Cowboys linebacker Justin Durant: “He just doesn’t want to go down, man. It’s like he’s angry or something.”

Eagles safety Nate Allen: “He just runs like he’s mad every play. But when he gets up, he’s laughing and joking about stuff with his guys, our guys. Not like taunting. Like he’s out there having the time of his life.”

Whatever happens Sunday, Marshawn Lynch has already won. That’s been the theme this week. It reminds me of something he said when he was asked to explain the mind-set behind Beast Mode.

“I know I’m gon’ get got,” he told the NFL Network earlier this year. “But I’m gon’ get mine more than I get got.”

Anyone who still has questions hasn’t been paying attention.