Draw It Up: Cam Newton’s Debut 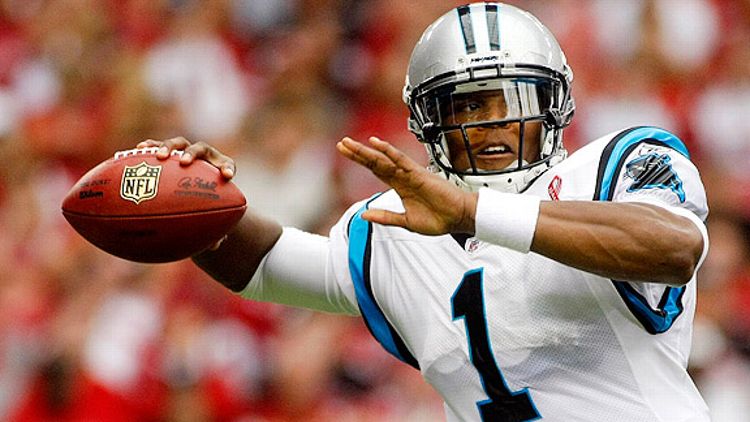 Part of the fun of being a football fan is assigning credit (and blame) on coaches and players. To do this properly — to be an informed fan — you have to understand what the players were trying to do in the first place. In this first installment of a new feature at The Triangle, Chris Brown of Smart Football will analyze a key play from the previous weekend of NFL action. First up: a look at Cam Newton’s NFL debut.

The usual caveats apply — it was only one game, the Arizona Cardinals aren’t particularly good at defense, and the Carolina Panthers did lose — but Cam Newton’s 24-of-37, 422-yard performance in his NFL debut was a shocking announcement of his arrival to the NFL. In terms of total offensive production, it very well might have been one of the greatest quarterback debuts of all time. All this is surprising enough from any rookie quarterback, even one as athletically gifted as Newton, but it’s especially so considering that so many doubted his abilities.

Entering this season, the biggest questions surrounding Newton were about his ability to stand in the pocket, identify the pass coverage, find the open receiver, and deliver the football under pressure. Newton showed a level of maturity against the Cardinals he had not shown in the preseason), aided in particular by go-to receiver Steve Smith. Newton’s first career NFL touchdown, a 77-yard bomb to Smith, showcased Newton’s poise in the pocket.

The Panthers lined up with Newton in the shotgun, with running back Jonathan Stewart to his left, three receivers to his right and a single receiver, Steve Smith, to his left. Given that it was third and seven and the Panthers had thus far not run the ball well, the Cardinals showed a blitz look into the boundary, or short side of the field. The defensive linemen and linebackers crowded to the offense’s left side. Although they showed a heavy blitz to the left, they did not reveal their biggest wrinkle: the defensive back lined up over Smith would blitz at the snap. It’s not clear whether Newton recognized this blitz before the snap or after it, but one thing is clear: He made them pay with a long pass to Smith. To understand why the play worked — and how Smith got so far behind Cardinals safety Kerry Rhodes, it’s important to understand what else was going on in the play beyond the corner blitz.

Although the Cardinals used an aggressive tactic in the cornerback blitz, they were not actually playing an aggressive defense; a common bait-and-switch in the NFL, particularly against young quarterbacks. Instead, the corner blitz was part of a zone blitz scheme: the blitzing cornerback was one of only four defensive players rushing (and the Panthers did an excellent job in picking up these rushers, particularly RB Jonathan Stewart), while the other seven pass defenders played zone. To the three receiver side, the Panthers had a very common play-call on, an NFL staple that is a favorite of Peyton Manning, among others, known as the “Levels” pass concept. The concept is a high/low read of the defense, with the outside receivers run simple five-yard in-breaking routes while an inside receiver — in this case, Panthers tight end (and Chicago Bear transplant) Greg Olsen — running a deeper in-breaking route. It’s difficult to tell exactly what coverage concept the Cardinals were using to the three-receiver side, but all Newton needed to know was that, when considering the deep safeties and the defensive linemen dropping into coverage, the Cardinals had many more zone defenders than receivers.

It was a different story to the other side with Smith, though. Because the corner was blitzing, Rhodes rotated over to play Smith to his side of the field. And there is one more element — another deep safety not shown on the television broadcast. Again, it’s difficult to tell exactly what Arizona’s defensive structure was, but typically when in a defensive look like this against a four receiver set with three-to-one side as the Panthers were showing, the deep safety has two options. His first responsibility would be to cover the inside most receiver to the three-receiver side (Olsen) if he ran any kind of deep route. If Olsen did not threaten vertically, for example if he ran a shallow crossing route or a quick out, the free safety could help out on the single receiver side.

It’s unclear what Rhodes thought the free safety was doing, but Olsen threatened deep, and as a result Rhodes was not going to get any help. Moreover, the typical adjustment against a cornerback blitz is for a receiver to run a quick route, stopping at five yards or even less. My guess is that Rhodes made a (somewhat) educated guess: “We have a cornerback blitz and this rookie quarterback is going to throw a quick pass. I’m going to either pick it off or make a big hit.” Instead, Smith, who likely had freedom on his route to get open, simply ran by Rhodes for Newton’s first touchdown. That’s the thing about guessing — you can be wrong.

So Newton had a very promising first start, but now he faces bigger challenges going forward: Opposing defenses will have game tape on him, and the Panthers still haven’t surrounded him with many outstanding weapons other than Smith. And in future weeks, when faced with these complicated zone blitzes, Newton will have to work a variety of areas of the field, not just the deep outsides. But those details can wait. After this week, everyone in the Panthers organization has to be breathing a huge sigh of relief — including Newton.