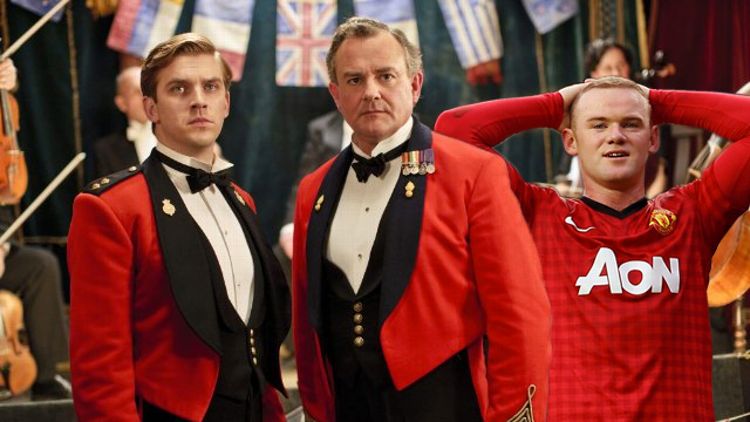 The majority of media critics scurrying to decode the forces behind Downton Abbey’s surging popularity in America woefully misunderstand it. The PBS juggernaut is a multi-layered portrayal of First World War Britain in the same way Animal Farm is a story about horses and pigs.

As anyone who follows the articulate musings of such figures as Wayne Rooney and Sir Ian Darke on Twitter can no doubt tell you, the costume drama is clearly a thinly veiled allegory for the English Premier League. With its story lines of privilege and servitude, old money, new money, a servant class living doomed lives in which happiness is but a fleeting emotion, and even a brutal flu virus that fails to respect class boundaries, Downton Abbey apes the narrative of the world’s most watched sports league, episode by episode.

To celebrate the show’s welcome return to PBS this Sunday, here (in the spirit of our Game of Thrones–to–English Premier League Converter) is a handy chart that will expose the hidden footballing subplots, character by character. Once you read it, you’ll be able to follow the allegorical levels of the show like a manic Labradoodle responding to a dog whistle.

Upright character prone to fits of temper and indignation after his last best hopes sank with the Titanic. Spends his days agonizing over young lives lost in conflict. Crawley’s pretensions to grandeur ultimately mask a dark reality: He is helplessly losing control of this estate, electing to remain stuck in his ways as the modern world passes him by.

An American heiress who married into British nobility. Her fortune is now tied to the failing estate and, though well-intentioned, Cora remains ignorant of the complex dynamics of Downton life and is easily manipulated by those around her.

Clings to condescension and superiority as crutches against reality. Her snobbery, once cutting, hides an increasingly transparent truth: She is confused by the swirling changes that surround the family and afraid the joke is on her. With her days monopolizing the “Best Bloom in the Village Award” now firmly behind her, the Dowager Countess remains good for a giggle if nothing more, and is at her best wondering why “every day involves a fight with an American.”

Beautiful, feisty, shallow character who blows hot and cold. Lady Mary’s obsession with marriage and inheritance are bound up in a deep-seated obsession with winning the title. Could her inextricable attraction to a young, dashing, well-coiffed officer help finally deliver it?

Derided ugly duckling bereft of both beauty and social skills. Appears doomed to perpetual rebuff, yet times of duress reveal hidden depths. Undetected skills (farmer kissing! nursing!) emerge, allowing her to look the horrors of war in the eye without flinching and gain the respect of all those around her

Desperately adjusting to an unexpected rise to riches, born of a surprise inheritance some would suggest he did not deserve, that has lifted him from middle-class irrelevance to the elite of English society. Last season he appeared temporarily incapacitated, yet managed to summon a miraculous recovery and claim the title.

A grating, stubborn newcomer whose very existence and willingness to bully others angers and alienates all those around her. Undeterred, she struggles to enforce her will on Downton.

Pert aristocrat with an adventurous streak. An idealist who does not care about money and is willing to take huge gambles to better the world around her. Lady Sybil’s commitment to self-improvement and modern thinking combined with those delicate features and lustrous hair make it hard not to admire her.

Rich, ruthless newspaper tycoon, a symbol of the new world order who favors power over honor and tradition. Lives his life by the creed he can take what he wants, but learns he is mistaken.

His old-fashioned belief in the status quo would be admirable if it did not limit his own upward climb. His staunch support of the class system means that, while he can occassionaly surprise, his lot in life is to be middling.

Old-school gentleman, noble in the face of indignity. Willing to employ creative solutions to compensate for his physical infirmity. Though determined and hardworking, moments of joy will always be quickly smothered by trials of suffering.

Bitter, resentful, sharp-tongued, and paranoid, willing to employ physical violence when need demands. Her sole pleasure in life comes when savoring the misery of others.

While everyone else flounders, this stoic head housekeeper with the Scottish brogue runs the show. An unflappable taskmaster who is the ultimate man manager, it is her way or the highway. The secret to her rise is simple, yet inimitable — a willingness to sacrifice everything to get the job done and an unfailing confidence her underlings will clean and polish any mess left by “squeaky bum time.”

A kitchen alchemist able to defy rationing by continuously mustering eye-watering combinations of roasts, tarts, treacles, and pastries on an austerity budget. While her physical limitations mean there is always the risk of the occasional over-salted raspberry meringue pudding, her valiant struggle to defy physical deficiencies is a feat of human wonder.

Mousy, eager-to-please maid whose meager vision of success is the rise to become an assistant cook. Daisy’s humble origins and simplemindedness have a way of creeping up on you, wheedling their way into your affections.

The “grubby little chauffeur” has a small but fanatical following at Downton, and is largely defined by his sustained, deep connection to Ireland. A feisty socialist and naive optimist, Branson believes that suffering and sacrifice in the present will, one day, offer a brighter future.

Faithful footservant with a special ability to conjure cheerfulness when faced with unrelenting misery. Paralyzed in war and doomed to die slowly of lung injuries.

Innocuous, fragile valet with a nervous disposition who is afraid of the rigors of combat. 100 percent filler.

Sassy maid looking to make a speedy splash. Her plans to rig the system and effect a quick rise backfires, and she ends up quite literally carrying the baby. Thrown out of Downton, she is last seen sniveling in abject poverty.

The ends justify the means for this crooked character. A cruel, blackmailing, black-marketing malingerer who will do whatever it takes to ensure his days dusting grates are long behind him. His schemes beggar belief, yet somehow he repeatedly weasels his way into positions he does not deserve. If he were alive today, would claim to have been a lifelong Barca supporter, but in truth, would have been a Manchester United fan in the 1990s, briefly jumped to cheer for Arsenal’s “Invincibles” in 2003, then switched to back Chelsea during Jose Mourinho’s heyday in 2005.

Roger Bennett (@rogbennett) is a columnist for ESPN FC and, with Michael Davies, is one of Grantland’s “Men in Blazers.”

The Rudy Gay Dilemma: If He's Dealt, Where Will He Land?