Do the Thunder Have a Scott Brooks Problem? Could Stan Van Gundy Solve It? 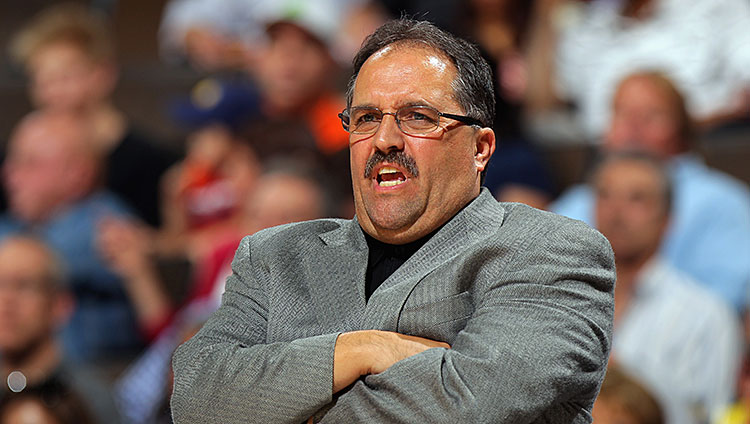 Scott Brooks is a pretty good coach. Let’s get that out of the way first. He has compiled a regular-season record of 293-170 in just less than six seasons as the head coach of the Oklahoma City Thunder. That gives him a .633 winning percentage, which is good enough for 16th all time and 10th among those who have coached at least 300 regular-season games. The Thunder have won four consecutive Northwest Division titles under Brooks, and they haven’t had a winning percentage worse than .610 since his truncated first season after taking over for P.J. Carlesimo.

Under Brooks, the Thunder progressed from laughingstock to up-and-comer to Finals contender, and appeared headed for a possible rematch with the Miami Heat last season until Patrick Beverley ran into Russell Westbrook’s knee and derailed that plan. Brooks has leveraged the length and athleticism of his young roster into a perennial top-five defense, and he has shaped the singular individual talents of Westbrook and Kevin Durant into an elite offense as well.

But it’s become increasingly clear — while watching the Thunder in their series against the Memphis Grizzlies, while watching play after play break down because of a borderline criminal lack of secondary action, while watching Durant and Westbrook play “your turn, my turn” with the offense for minutes at a time, while watching the same late-game sets they’ve been running for years and that everyone and their mother knows are coming — that Brooks has taken this team as far as he can, that this is the end of the line, and that it’s time to move on. In short, Brooks is Oklahoma City’s Doug Collins, and general manager Sam Presti needs to set about finding Durant his Phil Jackson.

I don’t particularly like advocating for people to lose their jobs, but I do greatly enjoy floating ridiculous hypothetical scenarios, so allow me to float this one: Stan Van Gundy should be the Thunder’s Phil Jackson, by which I mean he should be their next coach and win a bunch of titles with KD and Russ, just like Phil did with Michael and Scottie. (I’ve only been floating this specific idea for about two years.)

Van Gundy is one of a very few coaches known to shape his system to the personnel on hand, rather than imposing a strict system on whatever roster he winds up with. He can be a “fit” for nearly any job he chooses. (That list, by the way, basically consists of Van Gundy, Gregg Popovich, Rick Carlisle, and George Karl, and that’s it.) Most remember Van Gundy as a four-out, spread pick-and-roll devotee, one of the first to truly emphasize the importance of 3s and experiment with “stretch 4” types with the Orlando Magic. But before that, his Miami Heat teams slowed the pace down, almost always deploying two traditional bigs at the same time, and playing largely through Shaquille O’Neal in the post or an isolated Dwyane Wade on the wing.

Durant and Westbrook are the tentpoles of the Thunder roster, but I’d be most excited to see what Van Gundy could do with Serge Ibaka. It was under Van Gundy’s guidance that Dwight Howard blossomed into the most destructive defensive force in the league, and though Ibaka doesn’t quite have peak Howard’s range on defense, he’s already one of the NBA’s top shot-blockers. He’s led the Association in swats four years in a row, and he’s still only 24. He’s gotten better about not biting on pump fakes, and even when not blocking shots, he’s become extremely good at altering them. Van Gundy can work with that.

I won’t pretend to know what kind of offense Van Gundy would install to get the best out of the prodigious talent on hand, but I know it would be more imaginative than what I’ve been watching in the series against Memphis. You’d better believe there would be more than one option on any given play, that you’d never catch Durant standing at the elbow with his hand in the air for 14 seconds while Westbrook tries and fails to enter him the ball and then takes a pull-up jumper, and that Ibaka and Reggie Jackson would be a hell of a lot more involved than they are now. He may not be entirely down with Letting Westbrook Be Westbrook (which would suck for entertainment purposes and popular Twitter hashtags), but maybe he’d figure out a way to channel Russ’s furious energy for the better on a more consistent basis. And if you think he had fun building offenses around Wade and Shaq, or Dwight, Jameer Nelson, and Ryan Anderson, just wait until he gets hold of KD.

So for Nate, for Granny, for Caretaker, for America, for you, for me, for KD and Russ, let there be secondary action in offensive sets, let Stan be Stan, let Stan coach the Thunder, and for goodness sake let’s get Derek Fisher and Caron Butler off the floor in crunch time.

Something Special’s Brewing: How Milwaukee Turned a Disastrous 2013 Into a Miracle 2014 Start

Which Has Been Your Favorite Houston Rockets Duo to Have Watched Lose in the First Round of the Playoffs?