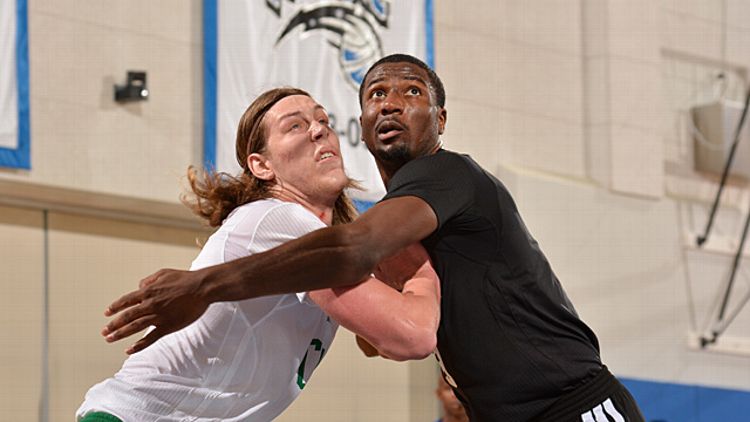 Another day in Orlando, another day of interesting developments. I must say, I feel fortunate to even be able to write another column today. Yesterday, I watched with some serious trepidation as Joey Crawford approached Rasheed Wallace only to … shake his hand and act like he was seeing a beloved old friend. Definitely not the interaction I was expecting. Since the Amway practice center didn’t spontaneously combust as two of the NBA’s most temperamental personalities collided, I’m able to dole out yet another set of notes on the summer league action.

The Power of Thor

One of the (if not the) most consistently impressive players this week has been Boston’s Kelly Olynyk. The Canadian big man (Canadians, man … they’re taking over) has showed off an extremely polished skill set along with better-than-expected mobility. In Boston’s two-point win over Indiana yesterday, Olynyk had 21 points and nine rebounds while posting a sterling plus-15 in 29 minutes. Summer league stats can often be misleading, but the way Olynyk put up those numbers is what should make Celtics fans feel good about their team’s first-round pick. At 6-foot-11, Olynyk played on the perimeter like a guard. Early in the game, he caught a kickout pass in the left corner, only to shot-fake an onrushing defender before taking a silky smooth pull-up jumper. At one point, Olynyk ripped down a rebound, drove coast-to-coast and finished with a rip move over the top of a defender (à la Dwyane Wade) before laying the ball in. While questions still remain about how he’ll handle himself defensively and whether he has the strength to score on the block against legitimate NBA big men, there have been several encouraging signs this week for Olynyk’s future.

The Calming Influence of Rasheed Wallace

I have to admit, it was hard to focus on the game between Oklahoma City and Detroit with Wallace on the Pistons bench. It’s not that I was starstruck, per se. It was just … Rasheed Wallace, coaching and mentoring young people. So when Sheed seemed to take a special interest in Detroit youngster Korie Lucious — pulling him aside at one point in the first half, putting his arm around him and offering some counsel — I was dying to know what the Wallace coaching experience was like. Since Lucious is a Milwaukee guy anyway (he went to Pius High School, which played in the same conference as my high school. Go Classic Eight alum, or something), I figured I could hit up the young Pistons guard after the game and see what advice Wallace was doling out these days.

Wallace was a player Lucious “always had his eye on” when growing up, so it was a little surreal for Lucious to now be coached by him. The little powwow during the game, according to Lucious, was Wallace saying to forget about a shaky first half, calm down, and for the young guard to just play his game. This is the point when we remember that Wallace was one the most volatile players in NBA history.

When I asked if he gave any specific advice, Lucious responded, “He told me to make sure to keep my dribble if I feel like I’m in a situation where I feel like I need to pick the ball up or something like that. He told me just to always keep my dribble alive even if I gotta dribble the shot clock out for the whole 24 seconds.”

It was clear that Lucious was thrilled to have an NBA great giving him counsel. So stock up on the bottled water and canned goods, because we live in a world where Rasheed Wallace is now a molder of men.

Seeing Greg Smith and Patrick Beverley shine for the Rockets’ team this week has been a little strange. Both players had significant roles last season for a very good Houston team, yet still find themselves playing in July against a host of players yet to establish themselves in the NBA. But by doing so, both players have been able to grow in different ways.

For Beverley, the opportunity to play point guard for this group puts him in the position of being a more assertive leader, something every team needs from its floor general. Given that Beverley is the more ideal complement to James Harden than Jeremy Lin (shooter/defender as opposed to slasher), it’s good that he’s getting valuable reps running a team — making the play calls, putting teammates in the right spots, and being forced, as a more experienced player, to be more vocal on defense. It’s clear that he is embracing this assignment, too, as Beverley can be seen sitting next to head coach Kevin McHale while going over the previous game.

For Smith, the summer league has been an opportunity for him to expand his skill set. In a normal NBA game, he’s never going to be allowed to post up unless it’s an emergency situation. But in Orlando, Smith has been given quite a few chances to go to work on the block. If that post game gets to a point where the team feels Smith can unleash it in the regular season and be effective, it will be an added boost to an already potent Rockets attack.

Even for hoops junkies, Miami’s summer league roster was filled with a bunch of players pretty far off the NBA map. It’s rather surprising then to see that group dominating in Orlando. I chatted with one of the team’s assistant coaches on Sunday after its first game against Utah, and he was quick to point out that most other teams had their core NBA players here and Miami was severely outgunned. He certainly didn’t paint a rosy picture of the team’s chances. But while no one player has been consistently brilliant (though the team’s second-round pick, James Ennis, has been solid), the group as a whole has been impressive. The team is filled with athletes and plays the exact same aggressive defensive style — and open offensive one — as the varsity club. There is no real significance to their success, and most of the players will go back to being no-names when it’s over, but it’s been a rather surprising development.

So, About That 79-0 Soccer Match in Nigeria