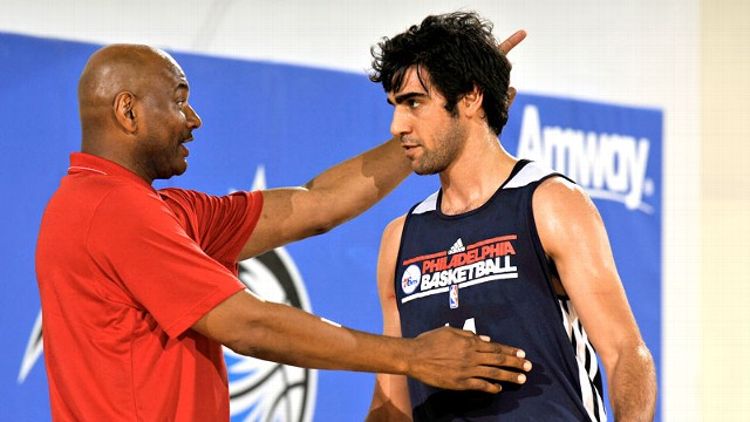 The second day of Orlando Summer League contained a little bit of everything — from the good (Jeremy Lamb’s game-sealing jumper), to the bad (Andrew Smith’s unfortunate injury), to the random (Scott Brooks’s son looking like a Sam Presti clone). I also got a chance to meet every basketball blogger’s favorite stats prodigy, Drew Cannon. Cannon still seemed to be trying to wrap his head around a crazy past few months that saw him featured in a Sports Illustrated article before suddenly being promoted to the NBA ranks with Brad Stevens. Though we didn’t chat long, Cannon came across as a sharp young guy, one who I’d be willing to bet we’ll read more about in the future. But without further ado, here are some more notes on Monday’s games.

Don’t Forget About Me

With new first-round pick Steven Adams in the fold and lightning rod Kendrick Perkins always a popular topic of conversation when it comes to Oklahoma City’s big men, it’s easy to overlook Thunder reserve center Daniel Orton. After one underwhelming season at Kentucky, Orton was drafted by Orlando late in the first round of the 2010 draft, only to virtually disappear for the next three seasons, thanks in large part to continued problems with his knees. Out of the spotlight for so long, it’s easy to forget that Orton is just 22 years old. Through the first two games this week, he ranged from solid to spectacular on the offensive end of the floor in limited minutes. Whether it was with a slick post move, a rim-destroying dunk, or a clever reversal pass while on the move after a pick-and-roll, Orton has emerged as a player that might still factor into the Thunder’s long-term frontcourt plans.

As long as Serge Ibaka is in town, Orton’s offense-only approach has a chance to make an impact at the NBA level if he continues to develop. The biggest problem for Orton, outside of his middling defensive ability, is that the knee injuries seem to be holding back his conditioning. The young big man looks to only be able to go hard for two to four minutes at a time before getting completely fatigued. After those short stretches, Orton can often be seen walking up court after a defensive rebound or bent over grabbing his shorts while waiting for a free throw. Still, the Thunder will be happy if conditioning is the only thing holding Orton back, because that means his game is finally ready to make an impact.

Before the draft, I wrote that Arsalan Kazemi was a solid, blue-collar prospect that teams obsessed with potential could easily overlook in favor of players with more upside. After a brutal first game in which the Oregon forward collected five fouls and only one rebound in just less than nine minutes of action, Kazemi bounced back on Day 2. The young Sixers forward filled up the stat sheet — six points, four steals, three rebounds, one assist, and an incredible chase-down block in 21 minutes — while posting a raw -2 plus/minus for a Philadelphia team that got hammered by Indiana, 96-75. The turnaround in Kazemi’s production coincided with a change of position. Instead of playing as an undersized 4 again, the Sixers staff moved Kazemi to the wing for almost every minute he played in yesterday’s game. The young forward did well, running the outside lanes hard in transition and staying disciplined in his spacing, and he looked more natural than expected catching and driving off kickout passes. Though it won’t be easy defending in space against wings, Kazemi has the foot speed and work rate to at least become adequate on that end.

I caught up with Kazemi after the game and asked if this was a random switch in between games or something the team has planned long-term. He said the team had him training as a wing in practices leading up to the summer league and that it’s the position he plays for the Iranian national team as well. I asked what was different or difficult about his first go at it in a professional setting.

“The only hard thing between the transition from the power forward and the 3 is that I always want to go to the offensive glass,” he responded, later adding that the coaches needed to remind him that as a wing his responsibilities now required Kazemi to be more disciplined in getting back on defense after a shot goes up.

What’s interesting about the move is that Kazemi’s ceiling as a player has now been raised. As a 4, the Oregon product was always going to be limited in his role because of size limitations. By moving to the wing, Kazemi can perhaps one day be a 35-minute-a-night starter because he will be guarding players within a closer range of his build. (It’s the same predicament that faces Kenneth Faried and why I had hoped the Nuggets would try to transition him to the wing as well.) The catch is that Kazemi needs to demonstrate he can capably guard NBA-caliber wings while also developing a corner 3. If one or both of those things happen, the wickedly smart Sam Hinkie will have struck second-round gold in his first draft.

When I looked over the rosters before heading to Orlando, Boston’s squad didn’t contain too many names I was overly excited about seeing in action. But after their first few games, this squad has caught my attention. First-round pick Kelly Olynyk has looked really solid (he will likely be included in a longer write-up), but it’s the cast around him that has me the most intrigued. Former Marquette star Darius Johnson-Odom, a short, stocky box of explosive power, lit up the Pistons yesterday for 22 points. Colton Iverson, the massive 7-footer Boston selected in the second round, looks like he could be a Greg Stiemsma–type player. European guard Courtney Fells had an excellent first game and was solid against the Pistons. And 6-foot-8 Tim Abromaitis has shown enough flashes that perhaps teams might look at him as a small forward who can compete on D and knock down shots from the outside as a bench player in the NBA. With a few more days left in Orlando (and possibly more for some of the players heading to Vegas), it will be fun to see how much traction some of these intriguing Boston players can gain with executives around the league.

One of the most entertaining parts about this week has been watching Varnado do everything in his power to block as many shots as possible in a given game. The dude cares not for fouls, the health of teammates, or goaltends as he lurches across the paint at any sign of penetration in a desperate attempt to swat some poor sap’s shot into next week. Brooklyn’s Chris Wright found that out the hard way last night. Wright turned the corner on a drive and had nothing but a wide-open lane in front of him. What seemed like a routine layup turned into a devastating rejection in the blink of an eye. From my view on the opposite baseline, Varnado appeared to spring out of nowhere to block the shot. The Heat forward is a bit of a one-trick pony, but that one trick has been endlessly enjoyable so far.

Part of the fun of traveling for me is the opportunity to have new dining experiences. (Basically every restaurant in my home state of Wisconsin serves the same type of food — burgers or deep-fried things with cheese.) After striking out horribly Sunday night on some delicious-sounding but “meh”-tasting lobster grilled-cheese sandwich at some random downtown bar (I probably need to be smarter about the decision to order something with lobster in it at a bar), the group I was with last night hit a home run with tacos at Don Jefe’s Tequila Parlor. I was seriously mulling over a move to Orlando just so I could have the spicy shrimp tacos for breakfast, lunch, and dinner for the rest of my life. So if you’re near the Amway Center at some point in the future, go grab some shrimp tacos at Don Jefe’s — and overnight a crate to me while you’re at it.