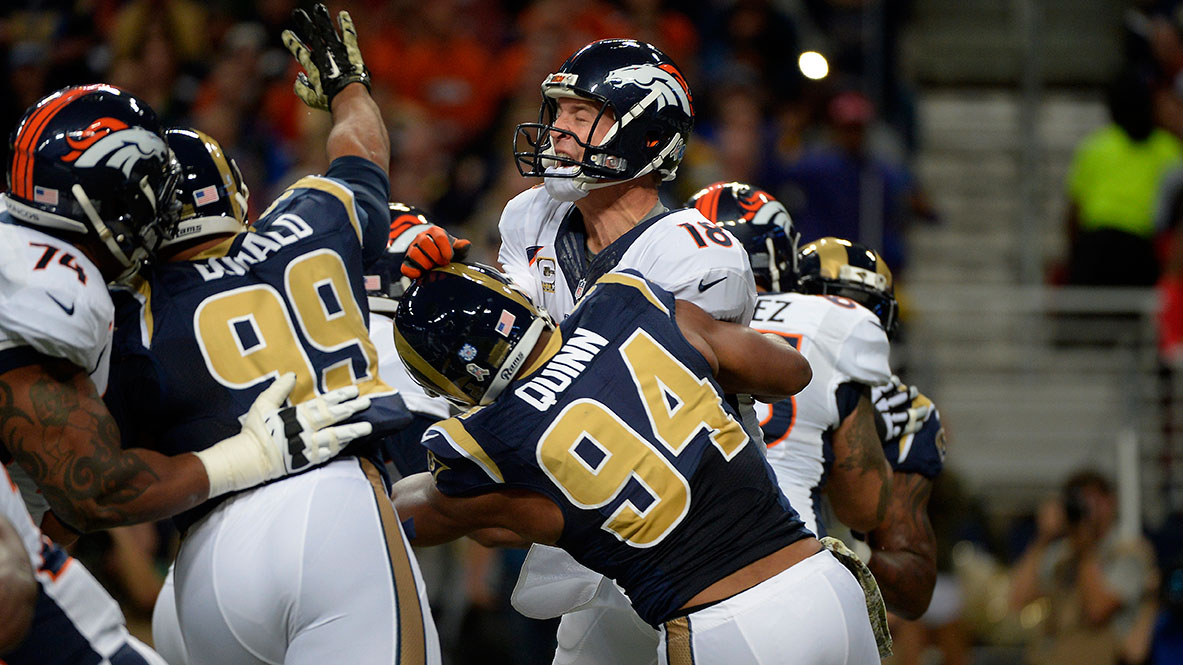 We’re still at a point when any criticism of the Denver Broncos offense is nit-picking. Peyton Manning’s crew may have capped off last season with an epic flameout, but last year’s regular season ranks among the greatest 16-game offensive performances in NFL history. The Super Bowl disaster felt more like the Broncos running into a team that couldn’t lose rather than a product of some inherent fault with the offense John Elway and his staff so masterfully built.

It was almost inevitable that Denver would slide back a bit this year, but for the most part, it has been what we expected. It’s second in offensive DVOA, only falling from the top spot after a lackluster showing in St. Louis and a ridiculous performance from Green Bay. So while it’s unfair to say it’s time to worry about the Denver offense after a meager seven-point output in St. Louis, we’re entering the stretch of the season when we begin to figure out just how good the contenders really are. Over the past few weeks, the Achilles’ heel for the Broncos has started to come into view — and, well, it’s 10 heels rather than just one.

Last season started terribly for the Denver offensive line. Fresh off making all of the money to be the team’s left tackle for the foreseeable future, Ryan Clady managed only two games before a Lisfranc injury ended his season. While losing one of the league’s most reliable left tackles isn’t quite ideal, Denver was able to develop some continuity along its offensive line because Clady’s injury came so early on. Chris Clark came in at left tackle, and the Broncos went with the same line that started in Week 3 all the way through the Super Bowl.

This year, Clady is back at left tackle, but the rest of Denver’s offensive line has been in constant flux. With last year’s left guard Zane Beadles leaving in free agency, Denver moved Orlando Franklin — he of the nightmarish Super Bowl performance — to Beadles’s old spot and replaced him at right tackle with Clark. That lasted all of five games, as Clark was replaced in Week 7 by 2012 undrafted free agent Paul Cornick, who then held on to the job for three weeks. Instead of bringing yet another replacement off the bench, the Broncos went with a different approach. Veteran Will Montgomery took over at center, while Manny Ramirez and Louis Vasquez slid one spot to the right.

By the passing numbers, all the shuffling doesn’t immediately appear to be a problem. Through last week, according to ESPN Stats & Info, Denver is seeing pressure on just 15.5 percent of its dropbacks — comfortably the lowest figure in football. But that, as usual, all comes down to Peyton Manning. He is consistently among the least-sacked quarterbacks in the league, and the Broncos rank 31st in the amount of time from the snap until the ball is thrown. The reigning MVP gets the ball out quickly, and he knows where his last resort is on pretty much every play.

A bad game for a Broncos tackle — save for Franklin’s day against the Seahawks — is going to be quieter than it would be on other teams. Cornick gave up just one sack and a couple of pressures in his final start against New England. But you can see on sequences like the above GIF, when he’s quickly beat by Rob Ninkovich, that his play affects what the Broncos try to do on offense. While Manning always gets rid of the ball quicker than most quarterbacks, even his process is being rushed this year. And it doesn’t help that Wes Welker — his short-yardage, middle-of-the-field target from last year — has severely fallen off.

The struggles have been a little more obvious in the running game. Denver ranks 26th in yards per carry at a paltry 3.7, and it’s 17th in rushing DVOA. Those are disappointing numbers, and that’s before you consider how the rushing numbers in a Manning offense are typically inflated by teams worrying so much about the pass. It isn’t a product of teams stacking the box with the Broncos milking the clock, either. Denver is actually averaging more yards per carry in those situations. With a lead of seven or more in the second half, the Broncos are getting 4.2 yards per rush. When the game has been within a touchdown, they’re churning out a pretty miserable 2.5 yards per carry. Running the ball when it’s part of their actual game plan just hasn’t worked for much of the season.

Some of the blame belongs to the left side of the line. Franklin’s transition hasn’t gone as well as the Broncos might have hoped, and Clady just isn’t playing at the level that earned him that huge contract. But most of the changes have come on the right side.

It makes sense that a team would try to put its five best offensive linemen on the field, but Denver’s drastic move — sliding both Vasquez and Ramirez over a spot — comes with a variety of consequences. Since coming to Denver on a sizable free-agent deal last offseason, the 27-year-old Vasquez has been among the best guards in football. He rightfully went to the Pro Bowl and was voted first-team All-Pro a season ago. But by moving Vasquez to tackle, the Broncos are both downgrading their right guard spot and failing to get the most out of a top-tier lineman.

The move from guard to tackle changes what an offensive lineman is trying to take away. The game comes faster inside, and leverage is much more important. On the outside, it’s all about space — how it’s negotiated and how to take it away.

All of that shows up here. Vasquez is dealing with a defensive end who’s quicker than the interior linemen he usually sees, and with all the space William Hayes has to work with, the play comes at Vasquez a lot slower than it would inside. The result: Hayes beats Vasquez across his face and stuffs C.J. Anderson for no gain on second-and-9. This is why Anderson averaged 3.2 yards on nine carries last weekend.

Vasquez isn’t the only 2013 Pro Bowler having to learn a new spot in the offense, either. Ramirez also got that nod last year, and although the change from center to guard isn’t quite as significant, there are differences. As a center, there’s some comfort and protection knowing that you’re rarely on an island. Just by virtue of positioning, there’s usually a free hand landing on the nose tackle on most plays. That isn’t always true at guard, and with the move, Ramirez is occasionally left alone to deal with freaky 3-technique tackles like Aaron Donald.

What the Broncos are really sacrificing with all this movement, though, is more than maximum individual production from two Pro Bowlers. Offensive line play is collaborative, whether it’s knowing when to move off the double-team in a combo block or passing off rushers during a stunt. Some of that comes from verbal communication. Other times, it’s all about feel. Both are made more difficult when new voices, bodies, and tendencies get thrown into the mix.

The Rams did their best to take advantage of this lack of cohesion Sunday, sending their typical array of blitzes while doing plenty of stunting up front. This play combines the two, with James Laurinaitis blitzing as a way to occupy Montgomery, while Robert Quinn loops around from his defensive end spot.

There’s a chance that Denver’s stumble last week was an aberration. Few teams have an inside-outside combination like Donald and Quinn, and the Broncos played a majority of this game without Emmanuel Sanders and Julius Thomas. Still, the problems they’re having along the offensive line are worth keeping an eye on because, for this team, anything other than a Super Bowl win would be considered a failure. And right now, it looks like their play up front may be what keeps them from getting one.