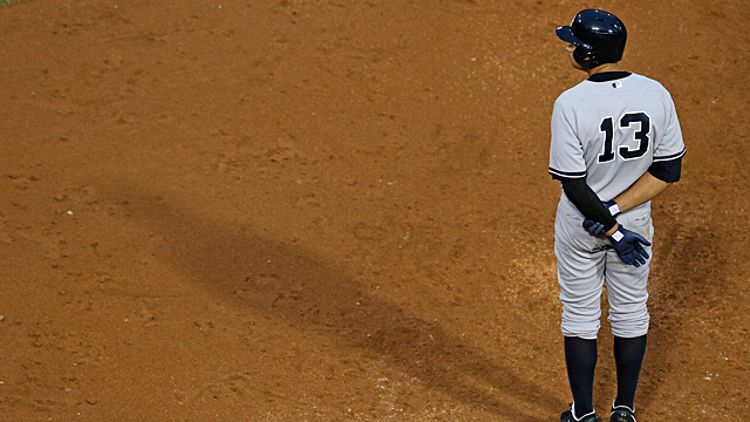 It finally happened. After months of rumors and speculation surrounding the Biogenesis fallout, Major League Baseball suspended 13 players for performance-enhancing drug violations this week. The suspensions included a 211-game ban for Alex Rodriguez, intended to cover the remainder of the 2013 and 2014 seasons. According to a statement from MLB, A-Rod was punished under the Joint Drug Agreement for use and possession of numerous forms of PEDs over the course of multiple years, and under the collective bargaining agreement for attempting to cover up his PED use by obstructing the league’s investigation. The moment was heralded as “historic,” “sport-altering,” “an incomprehensible circus,” and “aimless and desperate, even by its own aggressively sophomoric standards.” (That last one may be about Grown Ups 2.)

Here’s what we know so far: A-Rod — and A-Rod alone — has appealed his suspension to independent arbitrator Fredric Horowitz. This pits the most powerful man in baseball, commissioner Bud Selig, against its most reviled (and well-paid) player. Rodriguez will be permitted to play pending the outcome of the appeal, providing us with our second-most memorable “the banned is out on the field” moment (inspiration via the New York Post), while the other players have already begun serving their time. The suspension of Rodriguez, like the other Biogenesis players, was the result of a “non-analytical positive,” which means the proof of PED use or possession was based on something other than a positive drug test. In this case, Major League Baseball claims to have “overwhelming evidence” of Rodriguez’s use, including eyewitness testimony, receipts, checks, and text messages.

Without answers to these questions, we can only speculate as to his defense, but let’s go ahead and speculate. Here are some of the arguments we might see from A-Rod.

It wasn’t me
Selig must prove he had “just cause” to suspend Rodriguez. Although he is appealing in the shadow of 12 other players who accepted their suspensions, Rodriguez can still make several arguments to try to convince the arbitrator that Major League Baseball failed to meet its burden.

First, Rodriguez can argue that MLB did not have sufficient “non-analytical” evidence to prove that he used PEDs. Rodriguez can hammer away at the credibility of Anthony Bosch and Porter Fischer to cast doubt on the validity of their testimony and evidence, and to raise questions about the tactics MLB used to convince Bosch to turn over information.

Second, Rodriguez can argue that MLB has no basis for punishing him for lying or obstructing the investigation under the Joint Drug Agreement. The 34-page document lays out testing, discipline, appeals, and oversight in painstaking detail, yet makes no mention of punishment for impeding an investigation.

Third, Rodriguez can argue Selig has no basis for using his “best interests” powers under the CBA to punish him for a drug-related offense. Did I mention the painstaking detail of the 34-page Joint Drug Agreement? Rodriguez can make a strong argument that MLB and the MLBPA intended for those 34 pages to provide the exclusive remedy for drug-related offenses, and that Selig is overreaching, and violating the Joint Drug Agreement, by trying to wield his CBA powers to pile on. While it may seem reasonable in the abstract for MLB to be able to punish Rodriguez for tampering with its investigation, reasonableness in the abstract is trumped by rules in the CBA and Joint Drug Agreement.

Fourth, he can argue that MLB can’t punish him under the CBA or the Joint Drug Agreement for lying about PED use because they haven’t proved that he used PEDs. After all, you shouldn’t be punished for lying about something that you didn’t do.

OK, maybe it was me, but the punishment doesn’t fit the crime
Even if MLB has evidence to justify a suspension, Rodriguez can make several arguments that a 211-game suspension is either too long or too arbitrary. First, assuming Selig claims that 150 of the games were for first (50 games) and second (100 games) offenses, Rodriguez can argue that the Joint Drug Agreement explicitly precludes MLB from punishing for a second offense before giving notice of a first. Specifically, Section 7 of the Joint Drug Agreement states that a player can’t be disciplined for a second or third violation of the policy that occurred before he received notice of his first violation. In this case, all of the conduct Rodriguez is being disciplined for presumably happened before he was given notice of his first violation. So Section 7’s notice requirement might limit Selig to a 50-game first-offense punishment. (Granted, A-Rod admitted that he used PEDs from 2001 to 2003, but MLB did not begin disciplining players for PED use until 2004. So, even if this isn’t A-Rod’s first PED use, it’s his first offense for the purposes of the Joint Drug Agreement.)

Second, Rodriguez can argue there is nothing in the Joint Drug Agreement that empowers Selig to suspend a player for 211 games. The policy dictates that a player receives a 50-game suspension for a first violation, a 100-game suspension for a second violation, and a lifetime ban (with a right to appeal for reinstatement after two years) for a third violation. So how did Selig get to 211? Even if we assume that Selig punished Rodriguez for both a first and second violation in one fell swoop, that only gets us to a combined 150-game suspension. And if Selig punished him for only a first offense, that gets us to a mere 50-game suspension. Where did the other 61 or 161 games come from? The commissioner’s “best interest” powers under the CBA? His discretion under the Joint Drug Agreement? We don’t know the answer yet, but Rodriguez can contest Selig’s ability to go beyond the Joint Drug Agreement’s discipline scheme. (Interestingly, Michael Weiner, head of the MLBPA, did suggest that Selig was not bound by the 50/100/life discipline scheme when punishing the Biogenesis crew, but Weiner would certainly argue that there are limits to the commissioner’s discretion.)

Third, Rodriguez can claim that his suspension should be reduced because his punishment is inconsistent with prior suspensions for similar offenses. If Ryan Braun was only hit with a 65-game suspension, and the others were only given 50 games, why is Rodriguez’s so much harsher? Is it because there was evidence of repeated use? If so, wasn’t there evidence of repeated use by any of the other players? Is it because of Rodriguez’s obstruction of the investigation? If so, why was Melky Cabrera only suspended for 50 games after creating a fake website to trick MLB into believing he had unknowingly ordered a tainted supplement? And, what about the cases of Bartolo Colon and Yasmani Grandal? MLB concluded they had already served their time after receiving 50-game suspensions for testing positive for PEDs last year. But did MLB only have non-analytical evidence of one instance of PED use for these players? If they had evidence of more than one use, why are they protected from double jeopardy when Rodriguez is not?

Fourth, even if MLB has evidence that Rodriguez used more than one type of PED, he can argue that the Joint Drug Agreement only allows for a single suspension if a positive drug test reveals multiple drugs. Granted, Selig might respond that the rules are different for non-analytical positives, but Rodriguez can still try to highlight this potential inconsistency.

Abusing the ambiguity
Related to the first two points above, Rodriguez may argue that the entire process was unfair because there are no clear rules in the Joint Drug Agreement or the CBA to deal with this type of situation. After all, the term “non-analytical positive” is never explicitly defined in the Joint Drug Agreement. In fact, it is only mentioned twice in the entire document. The only meat on the non-analytical bone is the following ambiguous single sentence in Article 7(G)(2): “A player may be subjected to discipline for just cause by the Commissioner for any” use or possession of a PED. Yes, the MLBPA agreed to an ambiguous rule, but Rodriguez can argue that Selig abused the ambiguity.

Are you threatening me?
Rodriguez may take issue with the fact that Selig threatened to increase his suspension — and perhaps ban him for life — if he did not agree to give up his right to appeal. Players can voluntarily choose to forego this option, but Rodriguez may try to argue that players shouldn’t be forced to give it up simply to avoid an overreaching commissioner. In other words, the commissioner should hand down punishment that is appropriate for the offense, not threaten greater punishment to coerce the player. Granted, this is a common tactic in all forms of negotiation, and even criminal defendants routinely give up their constitutional rights to a jury trial in exchange for lighter sentences. But, Rodriguez may claim that tactic is inappropriate in the context of specifically defined penalties in the Joint Drug Agreement.

Loose lips
Rodriguez might try to argue that MLB violated the confidentiality provision of the Joint Drug Agreement by leaking the details of his suspension before the completion (or even start) of the appeals process.

Too soon
Rodriguez may also try to argue that Selig prejudged his guilt and/or the length of his suspension before completing his investigation and therefore did not provide him with due process. Yes, this would be similar to the argument that the Bounty 4 made against Roger Goodell last year.

The pink elephant
As Rodriguez suggested in his press conference last week, he might argue that the Yankees impermissibly interfered/colluded with MLB to help them escape from the remainder of his monster contract.

He hate me
Rodriguez might try to suggest that the lengthy suspension is driven by Selig’s desire to make an example out of him, punishing him for being a thorn in the side of Major League Baseball and the Yankees. Rodriguez’s actions might not win him any Mr. Congeniality awards, but he’ll argue they can’t justify additional discipline from Selig.

Know when to fold ’em
There’s still time for Rodriguez and Major League Baseball to reach a deal. We don’t know how long the arbitration process will take, but there’s nothing preventing the sides from continuing to negotiate until Horowitz rules. This might be a long shot, but a negotiated settlement may benefit both parties in the end — Rodriguez gets a reduced suspension and Selig avoids a potentially damaging challenge to his authority.