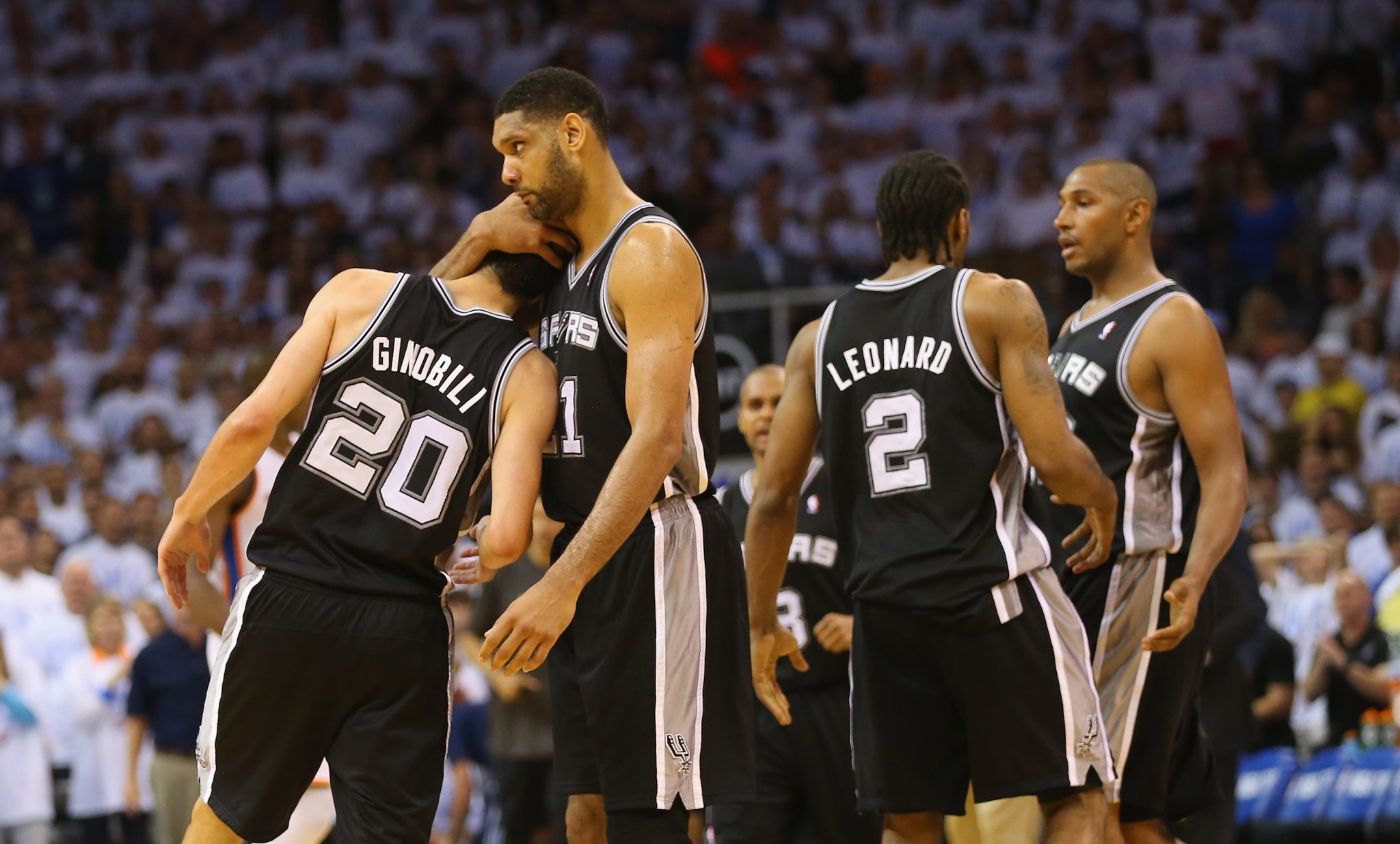 “We’ve got four more to win,” said Tim Duncan to TNT and NBA.com’s David Aldridge. “We’ll do it this time.”

For a player and a team whose popular identity is that of a franchise that does all of its talking on the court, I think this is as close as they have ever come to talking trash. At the age of 38, and after 16 years of ending dynasties and knocking back flashier, younger, more telegenic challengers, I would say it’s about time. I mean, it’s not “Fo, fo, fo,” but it’s a decent start.

Death, taxes, and the Spurs — there is something simultaneously inspiring and disheartening about San Antonio. A sustained brilliance, sustained sooooo long as to take on an air of inevitability. It’s some combination of the sun setting in the west and student loans. Gregg Popovich and R.C. Buford have molded the Spurs into something that could fairly be called a culture. The irresistible grind of the years, the entropy and egoism that pull apart so many successful teams, just washes off the team’s back through some mix of humility, smart management, and talent amplification.

The team essentially has no bad players. This season, the Spurs had seven players who played more than 1,000 minutes and logged an above–league average PER. (The only other team with that many players playing that many minutes at a PER above 15 is the Dallas Mavericks, so perhaps it wasn’t a surprise that they took the Spurs to seven.) With Duncan as the engine, Pop has taken unheralded, borderline-unknown players and bulldozed a league MVP and the most exciting point guard in this dimension of reality into an offseason of bewilderment and regret.

The Spurs started Matt Bonner; used Patty Mills, Cory Joseph, and a dash of Marco Belinelli to cover the loss of Tony Freaking Parker (!!!); had the Rubenesque Boris Diaw play havoc with the Thunder’s breathtaking athleticism; and beat the Thunder in six games. Diaw and Bonner, in particular, are perfect examples of Pop’s ability to maximize the effectiveness of his players in ways that seem, at a glance, counterintuitive.

Bonner is basically a one-tool dude mostly known for sandwiches, and Diaw is an extremely skilled fat guy; their ability to stretch the floor on offense was obvious, and yet they also shrunk it on defense. Replacing Tiago Splitter with Diaw or Bonner meant an extra player around the perimeter, providing a bulwark against the Thunder’s devastating ability to gallop off in a cloud of dust off Spurs makes, misses, and turnovers. Game 4 fast-break points: Thunder 21, Spurs 0. Games 5 and 6 combined: Thunder 20, Spurs 23. Matt Bonner, Cory Joseph, Boris Diaw, and Patty Mills: This is the banality of excellence.

Popovich is famously curt and borderline dickish with the media, but honestly, for the good of the human race and the game of basketball, he should be required to do five-hour interviews once a week explaining how they do this.

So, why disheartening? Because the answer to how you get that good is probably the most boring, most milquetoast, most go-to-school-for-accounting answer there is: practice.

Digression: When I was taking guitar lessons as a kid, I’d want to buy every book and video that explained a certain technique or harmonic theory, thinking they would turn me into Wes Montgomery. Every one of those books and videos basically boiled down to one thing: Here’s the technique, now go practice. Natural talent and inspiration are intoxicating ideas; Russell Westbrook blasting down the court and attacking the rim like basketball wronged him is a sight to see, and the kid in you wants that to be enough.

Sometimes it is. But more often than not, the real talent is in the ability to handle the boredom of running through the scale, or the play, or the drill, again and again, hours a day, week after week, for 16 years. So on that one summer weekend toward the end of the line, you can say, “We’ll do it this time,” as if the “it” were pouring a glass of milk and not winning an NBA championship.

Kevin Love Was in Boston This Weekend