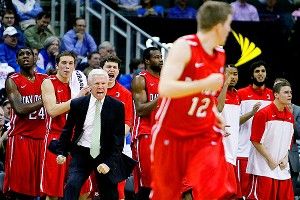 The NCAA tournament in March 2008 was so thrilling for us Davidson people, so consuming, so galvanizing, that it was next to impossible to not think grandiose thoughts. So now this is how it’s going to be.

Davidson hasn’t been back since.

The team the next year lost in the semifinals of the Southern Conference tournament, because that’s what sometimes happens, even with someone like Stephen Curry on the roster. The team the year after that won 16 games. Last year’s team won 18.

“You only have a few times in your life to grab the golden ring. In the aftermath of Stephen’s experience here, grabbing it again was going to be difficult,” the coach said. “Browning said a man’s reach should exceed his grasp or what’s heaven for? I’m always reaching and grabbing, looking, because it’s the only way to get where you want go.”

This year, the Wildcats had won 20 already by Saturday when they faced a very good Wichita State team in one of the weekend’s bracketbuster games. It was broadcast on ESPN2. It made me miss my school.

Filed Under: Inside College Hoops