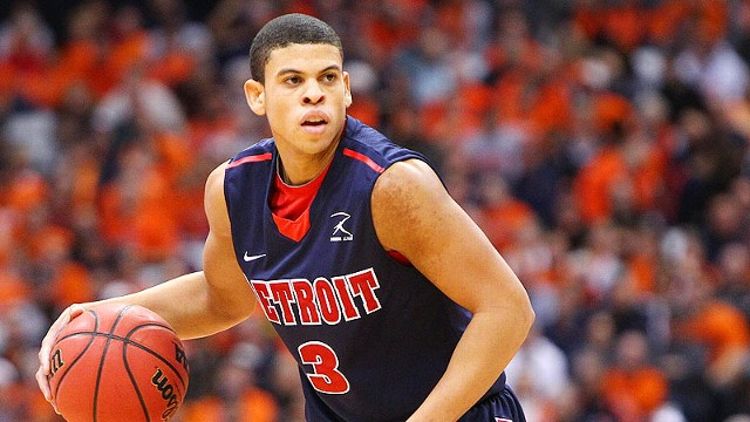 With his University of Detroit team nursing a two-point lead in the waning moments against an upset-minded Wisconsin-Milwaukee, point guard Ray McCallum calmly held his dribble on the left wing and waited for a teammate to set a screen. As the screen was set, McCallum read his defender cheating toward it. That subtle movement was all it took. McCallum quickly crossed over toward the baseline and exploded to the rim for a right-hand finish that put his team back up four en route to a crucial Horizon League victory on the road.

If you missed the highlight — or have never even heard of McCallum and the Titans — it’s understandable. The Horizon League rarely produces household names, and very rarely does any of their game footage make it to SportsCenter. But plays like this one are why people might want to start taking notice.

In the midst of an excellent junior season, McCallum has quietly put himself on the NBA radar thanks to a laundry list of positive attributes. With good size (6-foot-3) and athleticism, the Detroit guard certainly looks the part of a pro prospect, but what truly makes McCallum stand out is the way he plays.

The 21-year-old guard’s IQ is off the charts. Watch him, and you’ll see a player constantly scanning the floor, absorbing everything that’s going on around him, and quickly processing that information in order to make the optimal decision. Whether it’s directing traffic in the team’s motion offense or calling out a ball screen on defense, McCallum spends most of the game putting his teammates in the right spots on both ends of the floor.

That type of awareness and leadership were developed in large part by his relationship with his father, who just so happens to be Detroit’s head coach. With the elder McCallum, also named Ray, being a lifelong coach, learning the nuances of the game was something his son did at an early age.

That type of professional approach has brought about another key characteristic in the younger McCallum — poise. It’s that attribute, along with a host of other similarities in their games and makeup, that makes for an easy comparison to Damian Lillard, the Portland Trail Blazers’ standout rookie guard, who spent his collegiate career at Weber State.

It’s natural to suggest, given everything they have in common, that McCallum is set up to take the same path as Lillard, and that NBA GMs should hurry up and take notice. Despite their similarities, though, there’s one glaring difference that has nothing to do with physical ability or mental makeup, but rather with technical skill.

For players like Lillard and McCallum, the key to their NBA success lies in their ability to run the pick-and-roll. Unlike Derrick Rose or Russell Westbrook, they will never be able to consistently blow by defenders with elite athleticism, or rain jumpers over them like Steph Curry. What has made Lillard such a success, despite a lack of overwhelming skill in either of these areas, was coming into the league as a point guard ready to both pass and score out of pick-and-rolls.

The ability to run the NBA’s staple action with aplomb didn’t happen thanks to some innate skill, but was largely the result of his offensive system at Weber State. According to assistant coach Phil Beckner, the team’s offense during Lillard’s career included a ball-screen series that sometimes put the point guard in as many as 35 pick-and-rolls a game, sometimes even two or three in a single possession. That game experience, combined with targeted training in practice and film review, provided Lillard with invaluable experience.

McCallum, on the other hand, was involved in just 16 pick-and-rolls in his game last night against the University of Wisconsin-Milwaukee, less than half the amount Lillard regularly received. Detroit is primarily a motion offense team — a system that relies far more on balanced player and ball movement than on one individual dictating each possession. It’s not that the offense is inherently bad — the Titans made the NCAA tournament last season, after all. It just doesn’t afford McCallum the same crucial game experience that Lillard was presented.

That doesn’t mean that the promising guard is totally bereft of familiarity with the pick-and-roll game. He says practices often provide quite a bit of drill work on the subject. McCallum, dedicated student that he is, also makes sure to find extra time on his own — normally in the mornings four days a week with a grad assistant — to refine a skill he knows he’ll need at the next level.

“If I don’t get to do it all the time in games and practice, I’ll just have to work on it on my own,” McCallum says. “Sometimes after practice I’ll grab one of our bigs and we’ll do a little pick-and-roll. I’m continuously working on it every week.”

Though McCallum will no doubt wow GMs in interviews (as far as 21-year-olds go, he is beyond impressive) and with his work habits, he still needs to showcase an elite feel for the league’s signature play when the lights come on. As we’ve seen with Lillard, the ability to arrive as an adept pick-and-roll player can help a young player quickly ascend to the league’s elite. McCallum’s feel for the game is what sets him apart where he plays now, but that sense will have to be coupled with a more refined familiarity with what’s become the staple of NBA offense. That familiarity could be the difference between being the next Damian Lillard or the next small-school prospect who struggles to find his footing in the demanding terrain of the NBA.