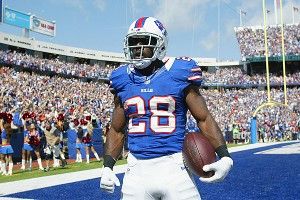 Big ups to Vernon “Small Ups” Davis — I went up 23,500 jermajesties* in Week 2. That takes the season-long profits to 57,000 jermajesties. Normally, my mission is to confuse you into thinking I’m good by burying you in jermajesty talk — but this year I’m actually good. And not just with prop bets. I’m 4-2 against the spread with my best bets as well. And now that I’ve ruptured a C1 vertebra patting myself on the back — thereby jinxing the entire rest of the season — let’s move on to Week 3.

Chiefs over 22 points vs. the Saints

I’m going to keep pounding this one until it loses. I urge all degenerates within eyeshot — betting the over in total points on whoever is facing New Orleans’s miserable, cruddy, dilapidated defense is as easy as it gets, regardless of where the game is played. You’ll probably never hear these words again — empty the piggy bank on Matt Ca$$el. 30,000 jermajesties

Longest TD in the Rams-Bears game over 43.5 yards

Now that Clay Matthews & Co. have finally taken their collective foot off of Jay Cutler-Cavallari’s throat — look for the Bears QB to open up the offense a little at home. The Rams can also cash this bet with the way they run their spread offense. Not to mention — we’re due for a punt return TD. It’s Week 3 already — what are you waiting for, Devin Hester? 12,000 jermajesties

5/1 odds that C.J. Spiller will have the most rushing yards in Week 3

The odds aren’t great, since this is a 40-plus horse race. But they’re really good when you consider the fact that C.J. can win this bet with only two carries. This week, C.J. stands for “Cashing Jermajesties.” 4,000 jermajesties

It might not be that kind of game, but these odds are way too high for teams with such fire power. Last week, the Pats’ offense was as lethargic as a Piers Morgan bedtime story. The Ravens were a dropped pass (by a now dropped player) from beating New England in last year’s AFC championship game. Both squads have something to prove. Hopefully that “something” isn’t what a foolish gambler I am. 3,000 jermajesties each

I know. Picking a Packers wide receiver to score the first touchdown is like playing roulette. I realize this offense has more weapons than the redneck pawn shop owner/rapist in Pulp Fiction. This week, they’ll choose to slay Jed with either the sword of Jones or Nelson. Worth a shot. 2,500 jermajesties each

Shade of red Giants coach Tom Coughlin’s face will turn if Bucs coach Greg Schiano were to ever try that “maul the offensive line and QB while in kneel-down mode” again: Over/Under … persimmon

I don’t know why, but I absolutely adore the Tom Coughlin/rosacea jokes. Truth be told, if Jason Garrett took my Cowboys to the Super Bowl, he could look like the Elephant Man and I wouldn’t care.

Sixty games, 4 TDs with the Cowboys. Three games, 3 TDs with the Giants. Marty had better go scoreless in the next 57 games or else Dallas tight ends coach John Garrett and I are going to have a big problem. What’s with this hiring family members bullshit anyway? Oh … wait.

I watched last week with pals/big Pats fans Sportsish Guy Simmons and Mighty Mighty Bosstones front man Dicky Barrett. Still not sure which was wider — that Gostkowski shank or their shocked mouths after the loss.

Let me get this straight, Antonio. You play Monday and hurt your ribs — sit out a series or two, only to return and put together a respectable game. Then you don’t practice (because you never do) until Friday. And then when everything seems fine — you sit? Nice job — and quite a tribute on Junior Seau Day.

Over/under 17.5 minutes: The shortest time the replacement refs take when spotting the football after a pass interference call

I’m going over. What a disaster! I can make my way through an iPhone 5 line outside the Apple store on Broadway in Manhattan in the time it takes for those perplexed gym teachers to make up their minds. I’m basically saying they suck.

750/1 odds that Chad Johnson is, as he claims to be, a more modest man. (Before you bet this one you, should know that minutes after making the statement, Johnson engaged in a lengthy argument with Phil Simms in support of his touchdown dances.)

Note to Showtime: I tune out when Inside the NFL turns into Inside the Actors Studio.

Make sure to watch my Cousin Jimmy tear it up as host of the Primetime Emmys this Sunday at 8 p.m. EDT on ABC. And always remember, nominees, win or lose — it’s an honor just to not be run over by Lindsay Lohan while waiting for your car at the valet.