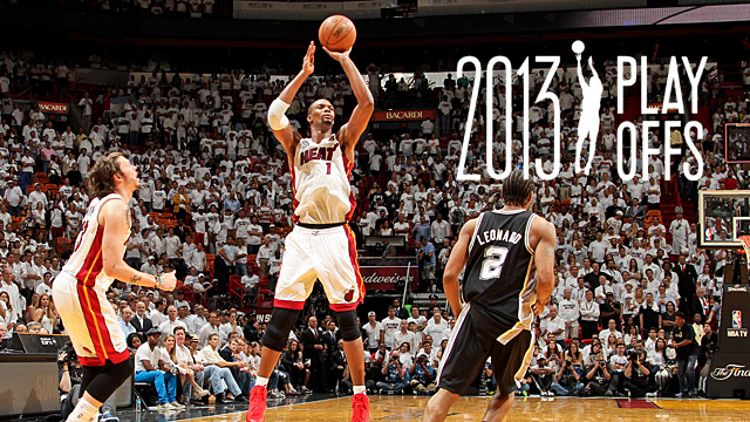 A look at the two most important shots from last night’s Game 1.

It Was the Best of Shots

In their biggest possession of the year, the Spurs were surely going to come up empty. A sequence that began with a pair of screens designed to free Tony Parker from LeBron James had badly broken down. Parker was 16 feet away from the rim, down on his left knee doing some desperate circus dribble. He was harmless, and LeBron James, the world’s best perimeter defender, loomed above him. The game clock read 9.2, the shot clock read 2.0, and this critical possession was on life support.

Parker got up, but his back was to the basket and James was in optimal defensive position, vertically spooning Parker deep in the midrange. Parker picked up his dribble, then pivoted on his left foot as means to at least face the basket and maybe create some separation from James. There was no way this was going to end well.

But that’s the exact moment when James overplayed his hand. In that split second, he overestimated Parker’s desperation. As Parker pivoted, James left his feet — a fatal defensive error — and prematurely leapt past Parker to try to block his shot. But Parker wasn’t shooting just yet, and with 0.7 on the shot clock Parker miraculously found himself with a clear look — a frantic and off-balance look, but a clear look nonetheless. With 0.4 on the shot clock, a camera bulb flashed as Parker was now squared up and about to release his shot.

Under normal circumstances, Parker hits shots in that area about 45 percent of the time. These were not normal circumstances. This shot had a higher level of difficulty, and was accompanied by an insane amount of pressure. Still, Parker, as graceful as ever, found a way to turn garbage into gold. Any normal NBA player would have been overwhelmed by the moment, but Parker is not normal, he’s an NBA Finals MVP. His shot gently careened off the glass before falling through the net. He had hit one of the biggest shots of his career, just a few seconds after looking harmless and desperate.

It Was the Worst of Shots

When I visited Miami in March, I took this picture of a fan’s sign. This particular Heat fan knows a lot about his team and its spatial shooting abilities: Ray Allen is lethal from the left corner, Shane Battier is great from the right one, LeBron is amazing near the basket, and Chris Bosh is great 19 feet from the rim.

During the regular season the Heat were among the best 3-point shooting teams in the NBA. This had very little to do with Bosh, who made 28 percent of his 74 3-point attempts this season. Regardless, for some reason, Bosh and the Heat seem to have decided that Bosh 3s are a new secret weapon, and last night during one of their most important possessions, they attempted to use this new weapon against the Spurs.

Throughout the regular season, Bosh attempted only nine shots from the area where he shot that key 3-pointer last night; he made two of them. During the playoffs he’s 4-for-12 in that vicinity. In total he is 6-for-21, or 29 percent, which is well below the league average. So not only does Bosh have very little experience out there, his small samples suggest he is not very successful either.

When we watch the sequence where Bosh takes this shot, it seems like the Spurs don’t really care. Bosh got open on that play because Tim Duncan collapsed to help defend the attacking James. As James passed the ball to Bosh for the wide-open 3, no Spurs player even attempted to close out on him. It happened earlier in the quarter as well. With 6:41 remaining in the fourth quarter, Bosh missed another shot from the exact same spot. In that case, Duncan half-closed out, protecting the space Bosh normally shoots from, while encouraging him to take the 3.

Bosh is not a 3-point threat. Yes, he made some huge shots in the corners against the Celtics last year, but on the long list of potent Miami Heat scoring options, Bosh 3s are nowhere near the top. The Spurs know this, and each time an attacking James feeds the ball to Bosh outside the arc, the Spurs smile. Looking forward to Sunday, it will be interesting to see if Miami continues to get Bosh 3-point attempts, or if they adjust and move him back inside the arc, where he thrives. In a few weeks, maybe we’ll be talking about how the great Chris Bosh emerged as a deadly 3-point specialist en route to an NBA championship, or maybe we’ll be questioning why in the world the Heat would introduce an unnecessary wrinkle in their offense at such a key point in their season.

A Story of Refinement: How the Spurs' Elevated Playmaking Triumphed in Game 1