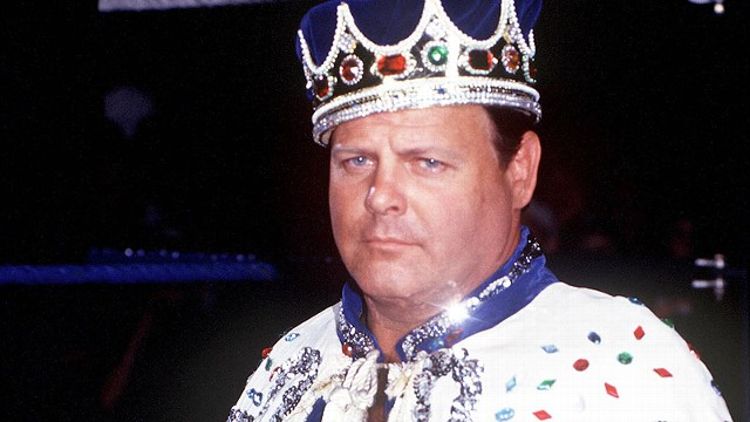 Travel with me back in time to October 1999 — the fabled last throes of wrestling’s Territorial Era — when even once-thriving regional wrestling hotbeds were a shadow of their former selves. Or, in the case of Memphis, they were basically the same as their former selves, right down to the wrestlers and television production values, except the studio audiences had shrunk and hardly anybody was watching at home.

Originally a part of NWA Mid-America before it split off on its own in 1977 as the CWA, Memphis was once a thriving wrestling town. It may have trailed other meccas of the sport in sheer star power and national acclaim, but that was never reflected in their local prominence. It’s said that in its heyday, up to 80 percent of the households in Memphis tuned in to the weekly Saturday wrestling broadcast.

Four hundred miles of bluegrass and single-pump gas stations to the north, Louisville was just as much under the Memphis spell. I grew up there, watching Jerry “The King” Lawler tangle with (and/or partner with) “Superstar” Bill Dundee, Dutch Mantell, “Wildfire” Tommy Rich, and the brothers Eddie and Doug Gilbert. I was 13 when Eddie Gilbert hit Lawler with his car in the parking lot outside the studio in retaliation for being “fired” by owner Eddie Marlin. (His brother Doug, who was allowed to keep his job, was also in on the Lawler blood feud.) I took this seriously, especially considering wrestling was fake and all. Back then, the ascendance of the WWF and its trademark buffoonish style made the local broadcasts feel so much more realistic by comparison. This was especially true of the CWA, which filmed in a studio that looked like the supply room of a Woolworth’s, with production quality several degrees south of your average YouTube girlfight.

It wasn’t just me who freaked out about the vehicular assault story line. The police station was flooded with calls reporting the “crime.” Lawler came back on TV the next week (bandaged up) to assuage the fans’ fear and to save the Gilbert brothers from real-life retaliation. (I specifically remember Lawler explaining that he luckily knew to jump right before the car hit him; that way, he rolled over the hood instead of getting run over, which happens when your feet are planted. I have no idea if this is true, but I’ve passed it off as truth in polite conversation approximately 200 times.) CWA’s brain trust had misjudged how far they could take things, even in that modern age. Crazy brawls were fine. Assaults with guitars and crutches and fireballs were acceptable wrestling fare. But take the fight to the parking lot and bring a burgundy four-door sedan into the mix and you’re in dangerous territory. Memphis wrestling was built on tradition, and part of that tradition was rooted in that saggy wrestling ring and the TV studio they taped in. Outside was the real world.

The wrestlers were the foundation of that tradition, and that same handful of recognizable performers enjoyed outsize influence in their little territory. Memphis promoters Jerry Jarrett and Lawler never spent big on free agents. Instead, they leaned on a handful of dependable southerners and found ways to turn hapless locals into overnight stars. (They also weren’t shy about making the guys on the roster do double duty as masked copyright infringements like Spider-Man or Cowabunga the Ninja Turtle or a wrestling Freddy Krueger named Nightmare Freddy, who was originally portrayed by the Gilbert clan patriarch Tommy, and later by his son Doug.) So it was no surprise that in 1999, seven years after Lawler decamped for the WWF, Memphis wrestling was still featuring guys like Doug Gilbert and Tommy Rich, who were in the midst of a feud with Brian Christopher and the Spellbinder. The promotion was called Power Pro Wrestling, but it was basically indistinguishable from the old CWA shows. It even had Dave Brown, who had been half of the CWA announcer team, as the play-by-play-slash-ringside-interview guy. In the old days, Brown lent real-news credibility to the product, since he doubled as the television station’s weatherman.

Christopher was known to most wrestling fans as a competitor in the WWF’s brief light-heavyweight division, and he’d go on to be best known as Grand Master Sexay, half of the hip-hop tag team Too Cool. Oh, and for the fact that he’s Jerry Lawler’s son, but we’ll get back to that. In the intermediary between WWF stints, he was back in Memphis, teaming with the monolithic, largely unskilled Spellbinder. (Spellbinder, real name Harry Del Rios, had a two-match career in the WWF as a wrestling illusionist named Phantasio.) They were the bad guys; Rich and Gilbert were the heroes, the beer-bellied defenders of old-school wrestling tradition.

The trouble started when Christopher and Spellbinder took to satire and crass humor to further their beef with the old-timers. Two weeks before the night on which Gilbert gave his now infamous shoot interview, Christopher and Spellbinder came to the ring dressed as their foes. Christopher, imitating Gilbert, raved conspiratorially about Jerry Lawler blackballing him from the WWF, while Spellbinder, pretending he was Rich, drank whiskey and passed out. The next week, they impersonated Tommy and Peggy Gilbert — Doug’s parents — with “Tommy” ranting about his archaic wrestling glory and “Peggy” revealing that Doug was actually fathered by the neighborhood ice cream man. Finally, the next Saturday, Christopher and Spellbinder drove to the studio in a limo, dressed in suits. Christopher had flowers in his hand. They were there, sad as it was, to announce the deaths of Doug Gilbert and Tommy Rich. This was a farce, and the announcing team treated it as such, but Christopher insisted that they have a memorial service for their fallen foes. He said that Rich was a loser, the shortest-reigning champ in NWA history. He called Gilbert a redneck who got his nickname, “Dangerous,” when he burned down the family trailer park. Christopher reiterated the ice cream man bit, working in some unsubtle references to “extra-long Popsicles.”

(Note: I’m indebted to the incredible write-up of these events at the seemingly — and sadly — defunct Pro-Wrestling Chronicle.)

At this point, Gilbert and Rich could no longer take the abuse. They stormed the ring, ran Christopher and Spellbinder off, and responded to their opponents with a shoot promo. This was 1999, after all, and ECW was making waves with similar reality-bending techniques. But Philadelphia was a long way from Memphis. Just as when Eddie Gilbert ran his car into Jerry Lawler, things were about to get uncomfortably real.

The old-timers were huffing outside the ring and Brown was there with the microphone. First, Rich took the mic and tore into Spellbinder, the conspicuously muscled big man, saying he’d be 110 pounds without all the steroids he’d taken. Pretty standard worked-shoot fare. Then Gilbert took over, and things went from reality-tinged to really fucked up. He explained that people always ask him why Brian Christopher is so successful, why he’s had so many championship runs, and that the secret reason was that Christopher’s father was area kingpin Jerry Lawler. (Probably the most poignant part, the moment you knew things were about to go off the rails, was when Gilbert prefaced the tirade by saying: “You know, Dave, there’s things we aren’t supposed to talk about out here. They told me a few things in the back I couldn’t talk about, but I don’t really remember what they was.”) He said that the only reason promoter Randy Hales hadn’t cut off his mic was because Hales was up in the control room smoking crack. Then Gilbert mimed the lighting of a crack pipe. And he said that he’d heard that Lawler had threatened to put his fist in Gilbert’s mouth, and that he’d never say something that corny … he’d just say that Jerry Lawler raped a 13-year-old girl.

Deep breath. Dave Brown yanked the mic away. Rich, the consummate pro, hadn’t looked particularly comfortable during his portion of the shoot, and now he looked downright despondent. The crowd, meager as it was, was booing as best they could. They mostly knew that Christopher was Lawler’s son, though they probably would have preferred not to hear it, so as not to disrupt their happy unreality. The Hales thing was too bizarre to countenance. But the rape thing, well, that was another story. A teenage girl had actually accused Lawler of rape, and even though she recanted her story, many Memphis wrestling fans knew Lawler’s history of dating (much) younger blondes, and this lent an uncomfortable credence to the story. Regardless, this wasn’t the kind of thing wrestlers said on air, even in a shoot interview.

It seems obvious that Rich and Gilbert had been told to go out there and shoot, and that Gilbert — who was never particularly stable and always held a grudge against Lawler — had been legitimately pissed off by the Christopher/Spellbinder bits, and taken the opportunity to push some buttons (and boundaries). In a wrestling territory as traditional as Memphis was, injecting reality into story lines wasn’t a welcome ploy. Brown, for his part, was indignant. After all, that was Dave Brown’s job. When CWA first started, he played second banana to Lance Russell, who was famous for being a font of grandfatherly disdain for bad-guy antics. When he left, Brown took over the role. In doing so, Brown was playing the straight man, sure, but moreover he was representing the viewers — us. When we were supposed to find things offensive, Brown objected to them. He knew Gilbert and Rich were being sent out there to shoot, but even shoots have their limits. When he snatched the mic away from Gilbert, when Gilbert lost his goodwill, well, all was lost. Just as with the parking lot angle all those years before, the wrestling business misjudged how far they could push the envelope.

Perhaps needless to say, Gilbert was fired. Some have claimed that Lawler himself drove to the studio and demanded a copy of the tape of the show, presumably to use as evidence to sue Hales and Gilbert. (He never filed suit, supposedly because there was no money to be won.) Power Pro Wrestling was out of business soon, because — perhaps coincidentally — inspectors cracked down on the promotion’s ramshackle studio space and insufficient insurance. The amount of money it would have taken to get the place up to code was daunting, plus Gilbert and Rich started up a rival promotion. (And needless to say, Lawler withdrew his endorsement of Power Pro. It’s unclear if he was technically a co-owner of the promotion, though he was often regarded as such; he was probably given a stake for his nominal involvement.)

Doug Gilbert’s brother Eddie — who was the vastly superior talent, for what it’s worth — had previously cut a shoot interview in 1993, when the Memphis territory was part of the USWA, and he also got fired for it. He went on to wrestle and work as a booker in several territories, including Puerto Rico, where he died of a heart attack in 1995 at the age of 33. Doug Gilbert still wrestles in Japan as Nightmare Freddy. Brian Christopher still wrestles independent shows as Grand Master Sexay. Harry Del Rios revived his Phantasio persona in New Jersey in 2012. Tommy Rich is a regular on the wrestling legends autograph circuit. Randy Hales went on to manage a Sonic drive-in. Dave Brown is still chief meteorologist for WMC-TV in Memphis.