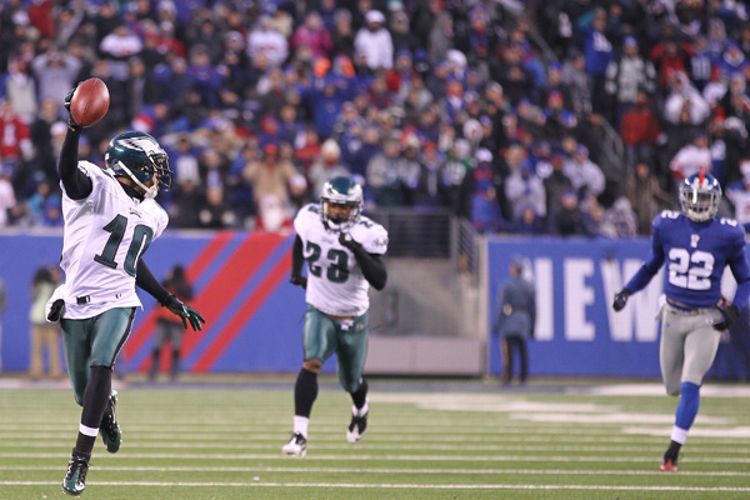 The NBA Finals began last night, so there’s plenty of news to discuss. Football is still three months away, and there’s no good reason to celebrate the art of punt returns today. But Thursday morning Bill Barnwell passed along this video of Clarence Anderson’s punt return for Poland’s Warsaw Eagles:

• They play football in Poland!

• Yo, that punt went like 80 yards. Punters in Poland are serious.

• Clarence breaks a full seven tackles on his way to the end zone.

• This guy’s name is Clarence (he lives at home with two real good parents).

• They play football in Poland?

Indeed! Even after NFL Europe disbanded in 2007, the Polish American Football League is still going strong. As of 2013, there are 74 teams in three divisions of the Polish American Football League. Seventy-four teams! This includes the Warsaw Eagles, Krakow Tigers, Silesia Rebels, Devils Wroclaw, and Bielawa Owls. The season goes from March/April to June/July, and culminates with a four-team playoff that ends with the SuperFinal, also known as the Polish Bowl. So, you know, now you know.

We all need to step up our Polish Football fandom. But that’s besides the point. Anderson’s heroics in Poland were great because they gave us a good excuse to spend an hour on YouTube appreciating other Great Moments in Punt-Return History. And after you’ve seen enough punt returns, some categories develop. The genres blend together sometimes, but in general, there are five kinds of returns we’re celebrating here.

Where is he going? He’s screwed. He’s going nowhere. OH GOD THERE HE GOES.

Dante Hall against the Broncos is a perfect example.

Related: Remember those few years when Hall was the most electrifying player in football? Or maybe it was actually only one year. It ended quickly. But we’ll always have that X-Factor nickname, the LIMITED-EDITION AUTOBIOGRAPHY you can buy for $50 on Amazon, and that one time Lil Wayne dropped his name as part of a euphemism for doing ecstasy. The Dante Hall era was fun.

HOLY SHIT THAT GUY IS FAST

Because sometimes it’s just fun to watch someone move twice as quickly as anyone else on the field. This is probably the most common category of them all, but it was Devin Hester who really turned this into its own art form earlier this decade.

Take it away, Joe Adams.

A lot of guys can run around the coverage, and that’s great, but it’s a lot more fun watching someone go into pinball mode and bounce their way through an entire defense.

THAT IS SO COMPLETELY UNFAIR

Likewise, sometimes guys just embarass an entire team and/or state with a blend of moves that can only be described as “Completely Unfair.” This is a clip from the SEC championship game two years ago, and it didn’t even go for a touchdown, but it’s included here out of respect for the evil, wonderful work of Tyrann Mathieu.

The video is blurry and shaky and might make you a little bit dizzy, and the 2011 Georgia defense says, “NOW YOU KNOW HOW IT FEELS.”

[Deion] Sanders set records in Tallahassee for on-field trash talk. … At halftime of a 59-0 victory at South Carolina, Sanders told the Gamecock fans they should ask for their money back. He showed up for the game against traditional rival Florida, at Tallahassee, last year in a tuxedo and a white stretch limo. Florida receivers, he once said, “must think I’m God.” He and Gator Ricky Nattiel — now a wide receiver for the Denver Broncos — engaged in a bitter competition that lasts to this day. “If I see him in the pros, I’ll probably kill him,” says Sanders. Preparing for a punt return on the road at Clemson, he pointed and shouted over to the Tiger bench: “This one’s going back!” Then he toasted the defense, whirling 76 yards for the touchdown, after which he struck a long pose for the end zone fans and screamed, “How you like me now?”

Remember: No matter how many horrible commercials he makes for DirecTV or NFL Network, old-school Deion Sanders was totally awesome.

And finally … we end with an important bonus category.

We’ve restricted this to a bonus category because it would be unfair to ask other players to aspire to this. It can never be replicated. Because this was a walk-off punt return. Because of the way Jackson was taunting the entire stadium before, during, and after said punt return. Because it happened against Philly’s biggest rival. Because it ruined Matt Dodge’s entire life. And mostly because it turned Tom Coughlin into the angriest old man on the planet, which is who Coughlin should be at all times.

All due respect to his Super Bowl triumphs, Coughlin is so much more fun when he’s irate and red-faced and searching for someone to scream at. Altogether, this might have been the greatest moment in punt return history, Desean Jackson history, AND Tom Coughlin history.

So yeah, that feels like a good place to stop.

How did we get from Polish pro football to 1988 Deion Sanders to 2010 Desean Jackson?

Hooray for football in June!