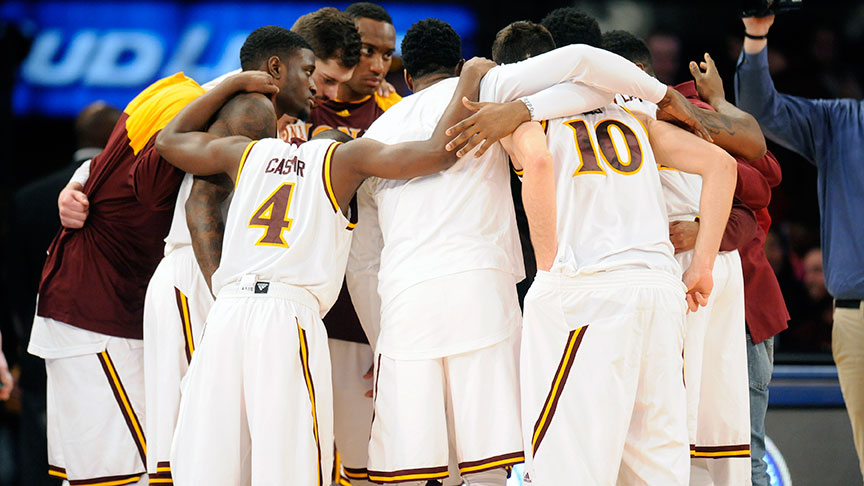 If you haven’t already heard, college basketball is done, kaput, tucked snugly into a hell-bound handbasket. Scoring in major-conference games has dropped about 3 percent from last season, and offensive efficiency has dipped along with it. Across all of Division I, 2015 will likely register as the slowest-paced season in the shot-clock era. Games are too plodding, referees too willing to side with the defense, offenses too inept. It’s a critique some NBA acolytes have lobbed at NCAA partisans for a while now, but the same complaints are gaining purchase among people who care deeply about the sport, people whose livelihoods depend on its popularity. Seth Davis of Sports Illustrated anointed one Saturday last month as “National Don’t Make Baskets Day.” ESPN’s Fran Fraschilla recently worried about the absence of “coaching creativity on offense.” “The game is of bad quality,” ESPN’s Jay Bilas told the Kansas City Star late last month. “The coaches aren’t bad. The players aren’t bad. We’ve got a bad product.” A knowledgeable hoops fan (and amateur gambler) who emailed me the other day wrote, “It used to be fun betting overs in college basketball. Those days are over.”

Iona head coach Tim Cluess has lots of theories explaining the state of things, some of which are more convincing than others: Coaches are controlling and risk-averse. Players aren’t developing sound fundamentals at an early age. NCAA rules handcuff staffs in terms of practice time, especially during the summers when the calendar is clear. Neighborhood parks have emptied out, places where a kid might otherwise wait an hour to get more run if he doesn’t take care of the rock. “How can we get more scoring, what rules can we tweak?” Cluess asks rhetorically. “Well, how about getting our players better?”

Down south, Davidson head coach Bob McKillop doesn’t have the slightest clue what’s going on. “I’m puzzled by the scores,” he said. “I see better athletes, I see more skilled, developed players as they go through their high school years and into their college days. I can’t figure it out.” His only guess, and it’s a reasonable one, is that longer and faster athletes also make for better defenders.

One thing we do know for sure? If you want to see a college basketball team score the ball, you need to be watching Iona and Davidson. 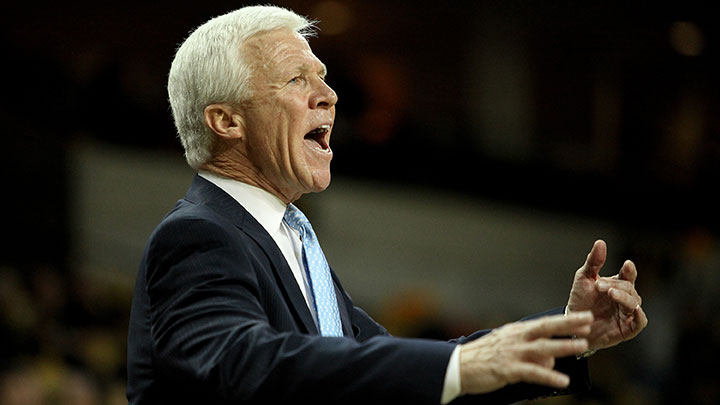 The Davidson athletic department named the court at Belk Arena after McKillop last February, slapping his signature on the hardwood next to some brown volleyball lines.1 It’s McKillop’s 43rd year of coaching and his 26th as the head man at Davidson, the only college that’s ever cut him a check. The Queens native is essentially self-taught. “When I became a high school teacher and was given a coaching position, I started reading about the guys who were great success stories — John Wooden, Red Auerbach, Red Holzman, Pete Carril,” he says. “I went to as many clinics as possible, watched games as often as I could. You could go on and on, the list of people I copied or looked at and studied.”

Closing in on 500 NCAA wins, McKillop describes the system he ultimately devised as an “equal-opportunity offense.” For it to work, five players must be unselfish and versatile. “In the game today, people dribble excessively,” says Elon head coach Matt Matheny, a former Davidson player and assistant. “If you really watch [McKillop’s] teams play, they don’t use the dribble without a purpose. Catching the ball, facing up, it’s kind of the old-school way of teaching the game. Catch and face and see.”

What you’ll see, if you tune into enough Wildcat basketball, is balletic movement and boatloads of uncontested shots. Davidson (14-6, 5-5) has finished in the top 40 nationally in offensive efficiency each of the last three seasons. Through February 3, they’re seventh this year, pouring in more than 80 points per contest. McKillop’s group isn’t particularly tall or deep, and they’re quite young, but they share the ball willingly and rain 3s, knocking down 39.7 percent as a team. Senior Tyler Kalinoski is multidimensional and deadly from outside, junior Brian Sullivan a probing guard with a Euro-soccer haircut. They gave Virginia’s pack-line defense all it could handle in late December and ripped a stingy Dayton unit to shreds for 77 without sophomore Jack Gibbs, their most skilled player. Picked to finish 12th in its first season of Atlantic 10 play, and last by editors at the Blue Ribbon Yearbook, Davidson wasn’t slowed down by this summer’s jump from the Southern Conference.

Playing at a liberal arts college with an enrollment of 1,850 is not for everybody, McKillop willingly admits. Of course, there are far worse places to spend the winter than in North Carolina, getting your buckets and eating barbecue at the coach’s house, white picket fence and all, directly across the street from your practice facility. It worked just fine for Stephen Curry. “There’s a magnetism about [McKillop], an intense, powerful presence,” Matheny says. “He established a sense of urgency. … He wanted that program to be great.” 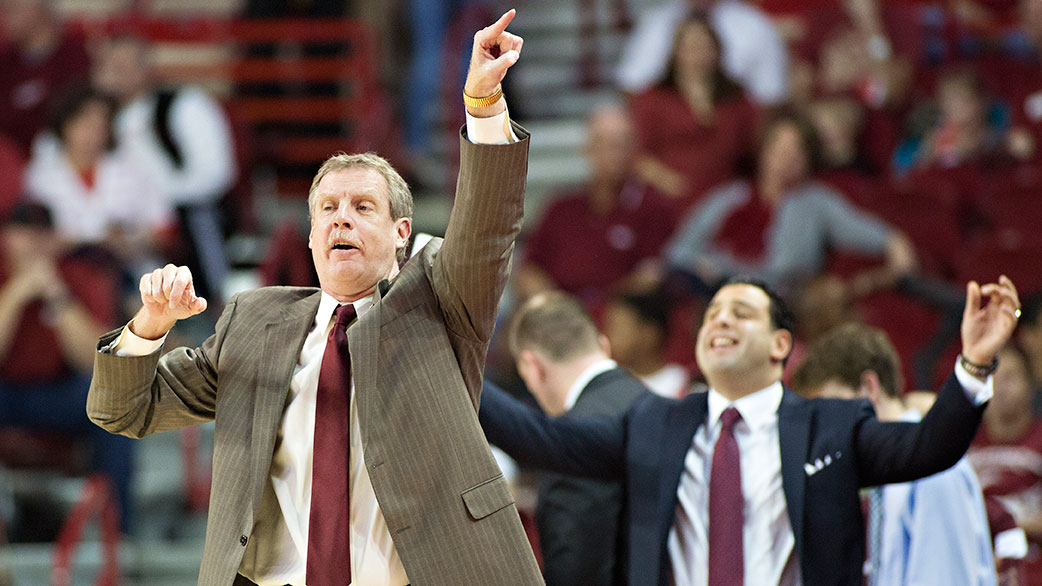 Like McKillop, Cluess was born in Queens, though he spent his formative years playing CYO ball on Long Island with three older brothers, all of whom earned scholarships to St. John’s. So did young Timmy, who suited up for three seasons with the Red Storm before finishing his career at nearby Hofstra, the university that McKillop transferred into a decade prior. Cluess’s first coaching job, again like McKillop, was in the Long Island prep ranks after stumbling into it at the whim of a friend; over 14 seasons, the former cop transformed Manhasset’s St. Mary’s High into a regional power.2 When he finally stepped back onto a Division I floor in the fall of 2010, points were his priority.

For that, he blames Frank Morris, his high school coach at St. Agnes Cathedral. (Florida’s Billy Donovan is also an alum.) Morris was a lacrosse man who brought those principles to the gym: rush the ball up the floor and put shots on goal. Morris’s short memory and his numbered sideline break — a scheme designed to create scoring opportunities quickly off your opponent’s made baskets — offered latitude that Cluess never took for granted. “Obviously, you tweak a million other things,” he says, “but I always wanted to see what would happen at the college level if given the opportunity to play that system.”

Iona largely has, and it’s going gangbusters. The Gaels (16-6, 9-2) have won 20 games four years running, and they’re on pace to claim their third Metro Atlantic Athletic Conference crown in five years. They’ve done so in extreme fashion; while Iona has finished in the top 30 in offensive efficiency each season since Cluess’s arrival, its average defensive efficiency has been a woeful 222nd. Only Louisiana Lafayette has run more transition plays this season, according to Synergy Sports. As Ed Ingles, Iona’s veteran radio analyst, puts it, “I think it’s the most exciting basketball in New York.”

There was a sequence in Iona’s win on Saturday, against St. Peter’s, that epitomized Cluess’s atypical approach. Normally one of the country’s most accurate shooting sides, the Gaels were ice-cold and trailing by 11 just before the half. Fans in the Hynes Athletic Center, Iona’s sweatbox of an arena, were clearly restless. Everything flipped in an instant. A dribble-drive led to an easy layup, and then a step-back 3 from inside-out threat David Laury cut the gap to six. On the next possession, Laury hauled down a defensive rebound and slipped the ball to freshman guard Schadrac Casimir, who pushed hard down the left sideline and found A.J. English waiting at the 3-point stripe. To that point, English had missed his first six shots from distance and a pair of free throws to boot. When Iona’s floor leader received the pass, he squared up without blinking and hoisted his seventh. That one landed. “A lot of coaches,” English had told me the day before, “don’t give you the freedom to make mistakes.”

Luckily for Cluess, English doesn’t make too many. Logging 20.7 points, 5.7 rebounds, and 5.6 points a night, he’s the undisputed general of a squad that’s fifth nationally in scoring, at 82.3 points per game. Casimir is the runaway MAAC freshman of the year, Laury an aggressive rebounder. And Cluess’s wide-open approach has become the program’s chief selling point. “Playing up-tempo is a recruiting tool,” Ingles says. “Kids don’t want to play slow today.” 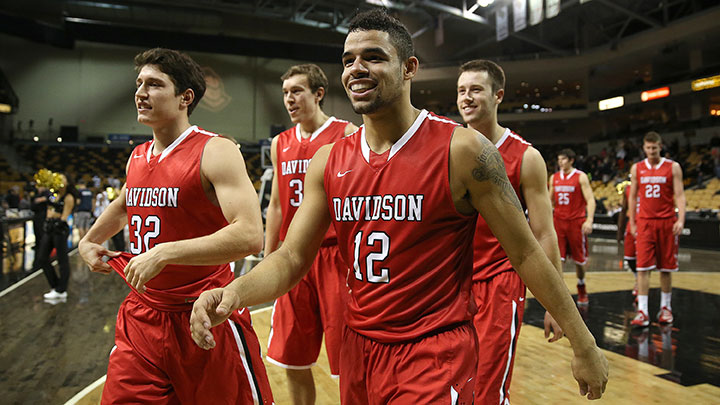 It’s been seven years since Curry lifted Davidson onto his back and into the Elite Eight. Before the Wildcats or Gaels can make a similarly charmed run, both need to qualify for the tournament. McKillop’s men must tunnel through a logjam in the competitive A-10 while Gibbs, who suffered a slight meniscus tear in January, nurses himself back to health.3 On a conference call this week, McKillop said the sophomore is “showing significant progress” but opted not to provide a firm timeline. The Wildcats are one of the “First Four Out” in Joe Lunardi’s latest ESPN projections.

Up north, sharpshooter Isaiah Williams is suffering through a stress fracture in his foot, one the Gaels hope will heal in time for a mid-February return. The MAAC is a one-bid league, which means a single slipup in the conference tournament will cost Iona dearly. Even for a conditioned team, sprinting for three games in three nights without a deep bench is less than ideal.

Neither club will alter its style markedly in the homestretch, though, nor should fans of agreeable basketball want them to. “If we win, thank goodness,” Cluess says. “If we don’t, well, somebody else can take my job and do a better job than I can.”

Not Quite a Dynasty: Are the Seahawks the Next Yankees, Celtics, or Bayern Munich?