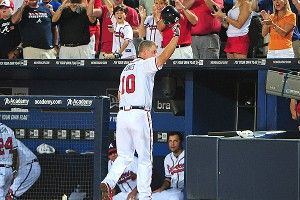 As a way to get people excited for the 2011 season, the Atlanta Braves announced the return of Bobblehead Nights. There were three slated for the year — one for young gun Jason Heyward; one for newly acquired, yet-to-play Dan Uggla; and one for Larry Wayne “Chipper” Jones Jr. For the last fellow, it was one of the many ways to honor and celebrate the longtime Brave, whose storied career seemed increasingly close to its end.

Unfortunately for the 38,000-plus that showed up to Turner Field for Chipper Jones Bobblehead Night on July 28, their man wasn’t even in the starting lineup. There are many awkward things in sports fandom, but a stadium full of people shaking a wobbly doll while the headsake is sitting in the dugout has got to be up there. The seventh inning began like the others — with no Chipper — but with one out and a man on first, a pinch hitter approached home plate to replace relief pitcher Anthony Varvaro.

It was Chipper Jones. Chip was about to take part in a baseball game on Chipper Jones Bobblehead Night. This was amazing.

And then Chipper hit into a double play to end the inning.

And then Chipper’s night was over.

And then the Pirates scored two more runs.

I haven’t spoken to Chipper about this, but even during this glorious farewell tour he’s on, I can’t imagine he’s slept well since creating that black spot on his career, Chipper Jones Bobblehead Night 2011. Luckily for his fans and for Chipper, a star whose legend is exponentially rising as his last season comes to a close, he had a way of redeeming himself.

Throughout the 2012 season, Chipper has been picking and choosing his days to play or sit out. Sometimes it’s ache-related. Sometimes it’s to prevent a future ache. But last night the decision seemed to be purely sentimental. Fifty-four weeks after last year’s travesty, it was once again Chipper Jones Bobblehead Night, his final one as a player. It was also his last chance at Bobblehead redemption.

The attendance for the matchup against the San Diego Padres, 33,175, was more than the previous two games combined. It was a sign of people’s love and appreciation for Chipper, but also for those bobbleheads. There’s no secret that the mathematical equation is “Chipper Bobblehead > Chipper.” Just ask Chipper:

“If we have to make some silly bobblehead things to get people in the stands, so be it. Keep doing it.”

Any other bobblehead-related thoughts, Larry?

“We get motivated to play every night, but there are certain nights when it’s special, whether certain family members are in the seats, or it’s your birthday, or it’s bobblehead night.”

After last season, it’s good to know Chipper has put bobblehead night in the same category as family and birthdays, because he sure played like it. Chipper seemed to want the old saying “You’ll never forget your last Bobblehead Night” to be filled with positive memories. Now that his head was in the right place, it was time to play some baseball.

And then he hit a two-run homer in the first inning.

And then he got a curtain call.

And then he got another curtain call.

“You always want to make a splash and bring people to their feet. This is just another of a handful of games this year that have been awfully special to me.”

“People tell me all the time they’re coming to games and we hope you’re playing, it’s going to be the last time we see you play. I take that to heart.”

Most of the talk surrounding Jones is about his place among all-time switch hitters, or whether he’s a first-ballot Hall of Famer, or where he stands among the Braves greats. While that’s great, we have years to discuss these topics. New plan: Let’s just marvel at how he’s riding off into the sunset. The list of athletes that deserve farewell tours is small, and it’s rare that they happen in such a classy way, on their own terms, all while that athlete is still playing at such a remarkably high level. Sure, he’s played fewer games than the rest of the lineup, but at age 40, through 76 games, he’s still leading the team in batting average at .315 among guys with more than three at-bats. You have to just watch in amazement as he makes you selfishly wish he’d never call it quits.