Cat’s Cradle: Kentucky Puts Another Victim to Sleep, and a Nightmare Looms in Indiana 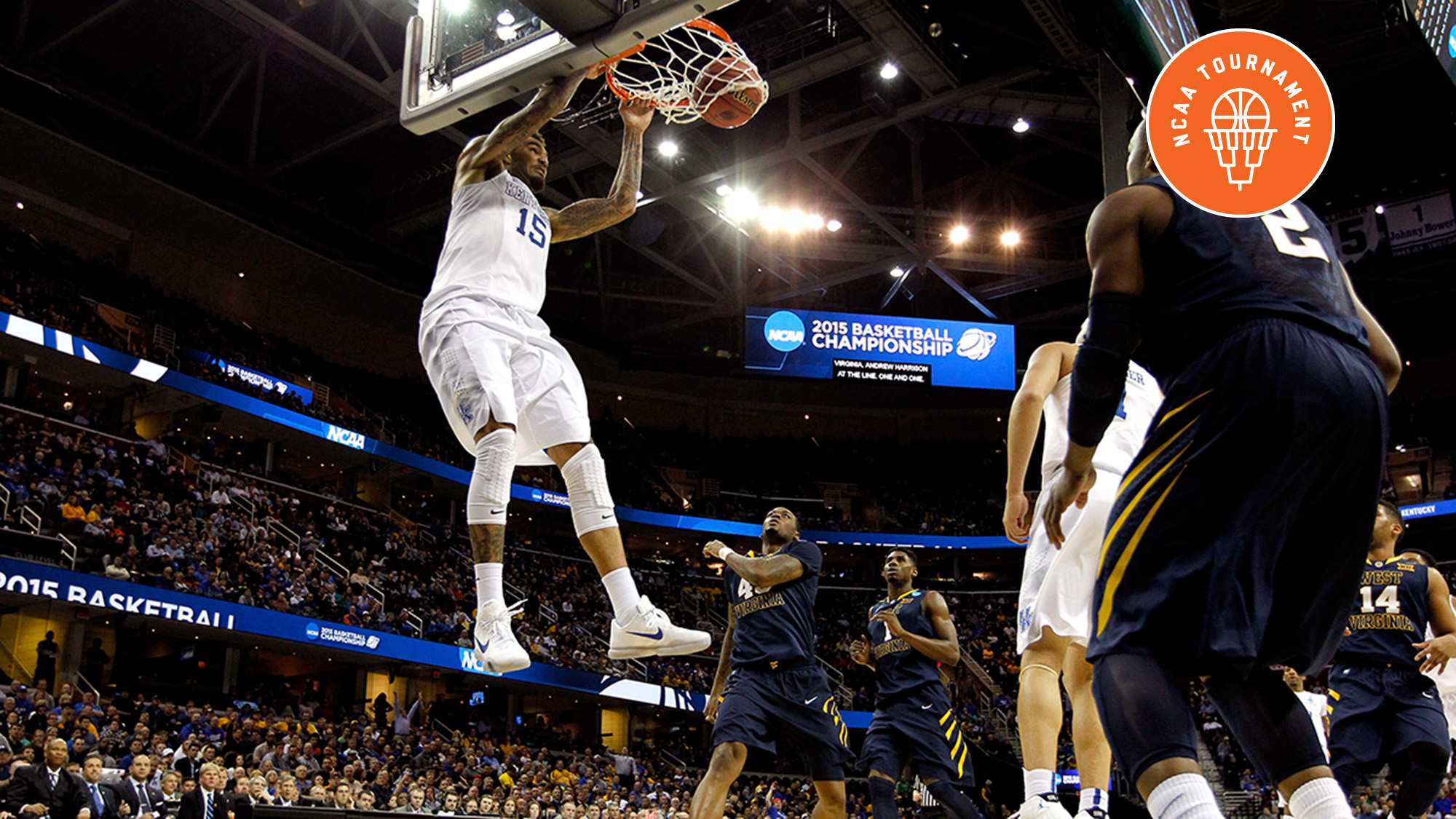 Before the big blue tsunami comes crashing down on them Saturday, Notre Dame should be commended for playing the second-best half of basketball of the 2015 NCAA tournament. Alas, the best half of basketball was played about 20 minutes later by Kentucky, which Notre Dame will now play in a regional final. The Wildcats went in at halftime leading West Virginia by a sadly not-very-astonishing 44-18. The aesthetics were a bit different. Kentucky’s performance was the equivalent of putting a puppy into a wood chipper, whereas what the Irish did in dispatching a Wichita State team that had won 95 games over the past three seasons was a thoroughgoing masterpiece. The 81-70 final was a product of a second half in which Notre Dame shot 75 percent from the floor. The Irish allowed the Shockers to get within three at 43-40, locked them up defensively the rest of the way, and then shredded them at the other end, running them through every play in the syllabus and back again.

All the Grantland coverage of the 2015 NCAA tournament, right here.
There was a glorious lob pass from Jerian Grant to Zach Auguste for the kids, and there was a genuine leather-and-laces, bring–Henry Iba–back-from-the-dead give and go for us old folks in the crowd to groove on. But it all began with the way the Irish froze the perimeter shooters on which Wichita State relied to open the floor for guard Fred VanVleet, who got 25 the hard way.

“That’s the fun way to play, and that’s the way that we’re at our best on both ends of the floor,” said Notre Dame forward Pat Connaughton, who recovered the shooting touch he’d forgotten to pack last weekend in Pittsburgh. “Defense sparks it, and it’s like blood in the water. You feel it and you want to keep getting stops so you can keep running. It’s something you can’t get enough of. It’s something that we pride ourselves on, and it’s something that, when we’re in that moment, we can run with anybody.”

If you take the second half of the first game and the first half of the second game, you have 40 minutes of the best college basketball you ever will see, played by the two teams that will face each other Saturday. The difference is that Kentucky gets into that flow that Connaughton was talking about as soon as it gets off the bus. It lives in that flow. The knowledge that an opponent is faltering comes to Notre Dame while the game is going on. Notre Dame has to look inward to find that moment, game by game. Kentucky lives in it, every day, 37 wins now and counting. That may be what makes all the difference. It was so transcendent that it prompted John Calipari to channel his inner Oprah, or Yoda. It was hard to tell.

“I don’t want my team playing angry,” Calipari said. “I don’t want them to be mean, nasty, hateful. It’s not us against the world. It is play with joy and love of the game and love of each other. That wins every time. The other stuff turns to fear.”

And, yes, coming from the leader of the sport’s most prominent mercenary army, as Ms. Parker once put it, this is to fwow up. Still, last night saw 40 minutes of excellence by two different teams in two different games. It might’ve been perfect if, as happens too damn often, the real world hadn’t come staggering into the joint, blathering and vomiting, and passing out on the carpet.

We should pause here for a moment to congratulate Indiana Governor Mike Pence, who, on Thursday, demonstrated exactly why political writer Matthew Yglesias once called him a fool who deserves to be laughed at, and why the late, great Indiana political gadfly Doghouse Riley regularly referred to him as “The Choirboy.” Convening a private meeting for the purpose, Pence signed something popularly called the Religious Freedom Restoration Act, a law that essentially gives Indiana businesses the freedom to discriminate against gays and lesbians. Pence then went all over the local media demonstrating that a stupid man signing a stupid law can defend it even more stupidly.

First, he told a radio show that he couldn’t come up with a single example whereby a private business had been injured in any way by catering to gay or lesbian customers. Then he tried to justify what he did by saying that this law did not discriminate because it merely mirrored the ill-conceived federal Religious Freedom Restoration Act — which it certainly does not, because the federal law is silent on transactions between private parties. (And, anyway, the federal RFRA, signed in 1993 by President Clinton, was designed primarily to get Native Americans out from under a Supreme Court decision that essentially forbade them from using peyote as a sacrament.) What Pence did do, of course, is guarantee that next week’s Final Four is going to be a shit show of the very first order.

Even if you’re in favor of the law, and shame on you if you are, Pence couldn’t have waited two weeks before bringing the circus to town? It may cost him the national meeting of the Disciples of Christ, and mammoth tech company Salesforce already has canceled plans to hold events in Indiana. Random celebrities have gone up the wall, and even Mark Emmert of the NCAA bestirred himself to say the right thing. And when you’ve ceded the moral high ground to the NCAA, you have drifted far from the pack indeed.

“We are especially concerned about how this legislation could affect our student-athletes and employees,” NCAA President Mark Emmert said in a statement Thursday afternoon.

He said the NCAA will “work diligently” to ensure competitors and visitors at next week’s Final Four are not “negatively impacted by this bill.” Emmert also said the organization, which is based in Indianapolis, will “closely examine the implications of this bill and how it might affect future events as well as our workforce.”

Thanks again, Governor. We are all so very grateful.

Of course, irony died an early, tragic death at this regional. In his press conference on Wednesday, Calipari was asked for the secret behind his recruiting and how he manages to keep the egos of the various future multigazillionnaires on his roster in check. “If you make outlandish promises …” Calipari began, at which point Irony downed 52 Xanax with a slug of Virginia Gentleman, tied an anchor around its ankles, and threw itself into the Cuyahoga to drown.

The Wildcats splashed West Virginia early, hitting seven of their first 10 shots and holding the Mountaineers to a grisly one out of their first 11. In their locker room, the Notre Dame players kept trying to say they didn’t care who they played Saturday, but you could see Kentucky in their eyes. Forward Zach Auguste, another Irish player who is making himself a television star over the last month, was upfront about it.

“Obviously, it would be a great challenge,” he said. “Their bigs are so good. You’ve got a couple of lottery picks up there, so it’d be a challenge to test myself against them.” And, if what seems now to be the impossible actually occurs, it would be off with them to a Final Four that is already nowhere near as weird as you know it’s going to get.

(Cataract-Covered) Eye of the Tiger: Is Detroit’s Time As the Alpha Cat Over?