Can Brett Brown Bring Some San Antonio Magic to the Sixers? 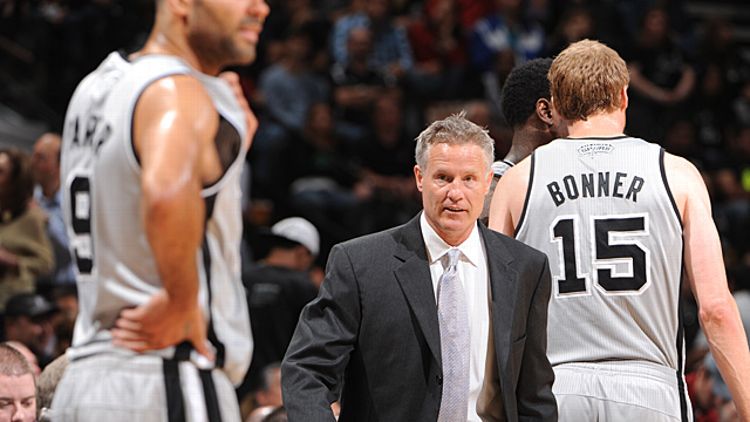 Two things are immediately clear after this hire: (1) Sam Hinkie cares not for traditional NBA timetables, and (2) if you’ve worked for San Antonio’s front office or coaching staff, or even just watched a Spurs practice while hidden in a broom closet, teams around the league will be interested in employing you.

Brown is the second member of Gregg Popovich’s staff to leave the Spurs staff this offseason to take the reins of his own team, following the Hawks’ hiring of Mike Budenholzer. As Pop’s lead assistant since 2007, Budenholzer was a slightly more recognizable figure (if a Spurs assistant can be such a thing) than Brown, who until being a candidate for the Philadelphia position was a virtual unknown to most NBA fans. Even San Antonio’s shooting coach, Chip Engelland, has seen more press over the past few seasons than the Sixers’ new head coach.

But just because Brown wasn’t a celebrated commodity doesn’t mean he’s unqualified for the job. Hinkie obviously took his time trying to find the right fit for Philadelphia’s current situation. The Sixers’ personnel both on and off the court has been almost completely turned over since the opening night of 2011. Holdovers Thaddeus Young, Lavoy Allen, Spencer Hawes, and Evan Turner are about the only evidence that remains of the Doug Collins era. Over the next few seasons Philly is going to be very young (and very bad), so getting a coach who can mold a shallow roster was paramount.

Brown spent the majority of his coaching career in Australian basketball, doing time as an assistant and head coach in both the National Basketball League (the Aussie pro league) and the national team program. Being part of a limited talent pool — the population of Australia is 23 million, lower than Texas — made the maximization of skills a vital part of competitive success. Coaches like Brown, who spend their formative coaching years working without the benefit of high-impact players, tend to be exhaustive about details and fundamentals because they can’t win games simply by rolling out talent. Not surprisingly, the word around NBA coaching circles is that Brown is a tremendous teacher of the game, something you’d pretty much expect from a coach who entered the Spurs organization in a player development role in 2002. Emphasizing the traits from the über-successful Spurs culture certainly will help a franchise searching for a new ethos as they move forward with their youth movement.

One adjective that also come up in conversations with people that have worked with Brown is “creative.” In San Antonio, Brown served as an idea man for Gregg Popovich’s staff, and he won’t be afraid to approach something in an unorthodox way if he thinks it can get results. Manning the helm for the Australian national team in the 2012 Olympics, Brown primarily stuck to Spursian concepts on both ends, but don’t be surprised if some interesting schemes surface in Philadelphia this season, given that the team’s low expectations will allow more leeway for their new head coach to experiment.

A lot of these same things were written about former Bobcats head coach Mike Dunlap when he was hired before last season. The comparisons between him and Brown will be inevitable and likely cause some concerns on the part of Sixers fans, but part of Dunlap’s quick dismissal in Charlotte was reportedly due to his inability to build relationships with players. Brown has worked in the league in some capacity for more than a decade now and is regarded as a great communicator with an open coaching style that allows for player input. That could be key, possibly helping Brown avoid becoming a sacrificial lamb brought in strictly to develop young players while the team gets pummelled, only to be cast aside when the Sixers add veterans and reemerge as a playoff contender. No matter how it plays out in the long run, the important thing is Philadelphia now has a head coach who seems to be a great match for a young group that will need all the education and motivation it can get as the team moves forward toward a brighter future.