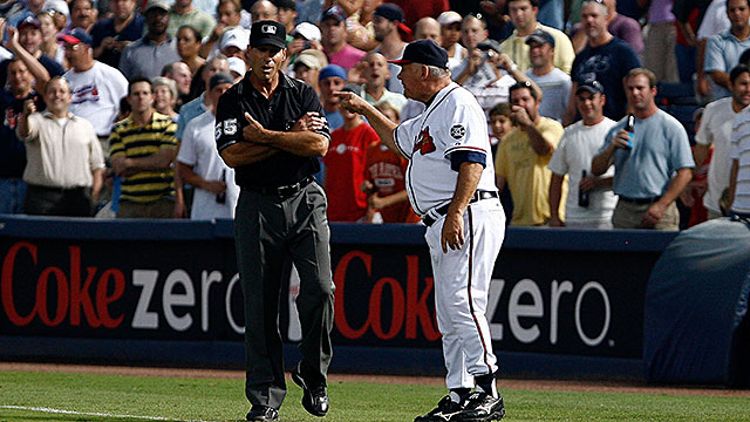 A scrum of reporters jammed into Bobby Cox’s small, plain office at his last spring training, in 2010, not far from Disney World. I had a spot on the floor. Looking around, the room betrayed little. There were no pictures of Otis’s over-the-wall catch or Sid’s nearly-knee-shattering slide or even Cox’s favorite North Georgia fishing hole. There was nothing on the bare walls that a lifelong Braves fan like me might read into, wishfully, in hopes of unlocking the mystic psyche of the great old skipper who was elected to the Hall of Fame this week after 29 years in the majors.

There were lots of questions from the scrum, though. On the boss side of the desk, where an uncleated foot rested, there emanated long silences and occasional grunted answers from Cox’s miserly mouth, in which a plug of Skoal suffered. These were often followed by the Southern semi-profanity gah-dawgit.

Reporter: Bobby, um, do you think this will be Chipper’s last season?
Cox: [Long pause.] Gah-dawgit, I don’t know.

I was there for a general interest magazine that chose not to print a portion of the interview I produced, in which Cox waxed profane about the art of quarreling with umpires. In his career, spent almost entirely with the Braves — he oversaw their 1990s ascendance from worst to first — the 72-year-old earned 2,504 wins (fourth all-time), 14 division titles (a record 14 of them in a row), one World Series ring, and 159 ejections, the most in Major League Baseball history. The dude enjoyed a good squabble.

“You’re not supposed to argue balls and strikes,” Cox said from behind the desk, opening up a little. “Getting ejected [for arguing calls] isn’t quite automatic. But it’s close, even from the dugout. We broke that rule a lot.” He paused, beginning to heat up some. “I’m not proud of that [ejection] record. I’m not anything about the record. I don’t give a fuck about the record. There is no record. It’s a simple matter of longevity.” Got it.

That said, here’s my previously unpublished primer for the budding questioner of calls who is in need of tantrum-refining technique from the master himself:

Have a Damn Good Reason

“Why leave the dugout?” Cox asks. “Close plays that you haven’t been getting in a series, maybe. Better go out and say something if you want them to start going your way. Or the reaction of your players: You’re defending them. If I were on the field I’d want the manager sticking up for me. Sometimes players are dead wrong, ranting and raving, but you stick up for them. They appreciate that.”

Keep It Quick and Quiet

“It depends how loudly you argue the call,” says Cox. “Most umpires are good about letting the argument go, but you can only go on for so long, or go so far. If you don’t leave it alone after a minute or two, you’re in trouble. They want to keep the game moving, so they’ve got to throw you out. I had trouble leaving it alone, I guess.”

Beware of the Moment

“Kicking dirt, stuff like that, that all comes with the moment,” says Cox. “I never intentionally kicked anything, never planned it out at least. Stealing the base and throwing it … They’re too heavy to carry around and throw anyway. Nobody told [easily aggravated manager Lou] Piniella that. Lou ain’t throwing bases anymore. You never know what’ll happen in the moment. Better to just keep your mouth shut.”