Brawl Above All: Four Questions and One Takeaway From Bradley-Provodnikov 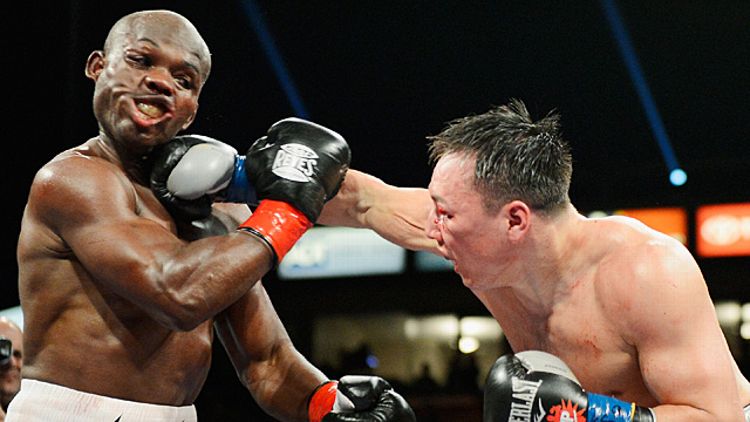 1. Was that the fight of the year?

Jay Caspian Kang: It’s only early March and the big fights of the fall haven’t been lined up yet, but should we go ahead and proclaim Saturday’s brutal 12-round welterweight battle the Fight of the Year? For those rightfully rolling their eyes right now, let me clarify the question. Given the ongoing feud between Golden Boy Promotions and Top Rank, the age of some of the top fighters in the sport (Sergio Martinez, Floyd Mayweather, Manny Pacquiao, and Juan Manuel Marquez are all at least 34 years old), and the general putridity we’ve seen so far in 2013, are there any potential matchups that could possibly match the skill, power, and heart we saw on display Saturday night in Carson, California? Great fights often come out of nowhere, with Bradley vs. Provodnikov being the most recent example of that truth. But given the protection of some of the top young contenders via their promoters’ matchmaking, will we really see a fight where a top-flight fighter like Bradley gets seriously tested by a guy who has absolutely nothing to lose? What would that fight even be?

The smart money lies with Canelo Alvarez’s upcoming bout against Austin Trout in San Antonio. I suppose there’s a chance that Trout’s speed and the sheer volume of his punches slows down the unstoppable Canelo machine, but count me as maybe the only boxing writer out there who doesn’t really buy all the talk that has circulated about Canelo taking the fight against the wishes of his handlers and Golden Boy Promotions. Someone sees a real weakness in Trout that the rest of us who watched him beat Miguel Cotto do not. If Trout’s as dangerous as he seems, there’s no way Golden Boy would risk their big golden Canelo baby at the tender age of 22.

2. What was Timothy Bradley thinking?

Rafe Bartholomew: I’m fairly certain that if the opening bell had rung Saturday night and Bradley saw a wood chipper standing opposite him in the ring, he would have ran straight into it. That was apparently — and somewhat inexplicably — his strategy against Provodnikov, who had a reputation for being a sledgehammer-fisted mauler.

Bradley gave Provodnikov plenty of chances to display his talents, and the result was a riveting slugfest, but what possessed Bradley to stand in front of a bigger puncher and exchange blows, a strategy that almost got him knocked out several times? The last time Bradley fought, he sprained both his ankles and still managed to survive 12 rounds against Manny Pacquiao, a much faster and more versatile offensive boxer than Provodnikov. But then again, the Pacquiao fight — and Bradley’s wildly controversial win — are probably to blame for Bradley’s apparent decision to prove himself in a brawl against a brawler.

Before the fight, Bradley spoke openly about how difficult it was to feel like boxing fans and even his own promoter turned on him for winning a decision few people felt he deserved. Last week, in his interview on HBO’s The Fight Game with Jim Lampley and during a pre-fight press conference in Los Angeles where he mouthed off to Top Rank CEO Bob Arum, Bradley seemed like he still felt bitter by the treatment he endured after the Pacquiao fight. I thought he might come out flat and uninterested against Provodnikov, that perhaps the shunning he received from the boxing business had taken the fight out of Tim Bradley — something every punch he’d ever taken had failed to do.

Well, that wasn’t the case. Instead, Bradley came out hell-bent on giving “fight freaks” a toe-to-toe war that would make people like him again. Bradley seemed to have reached a conclusion about his place in boxing’s pecking order: Only the handful of dazzling fighters atop the pound-for-pound list can become stars by showcasing their skill, and he is not one of them. He does not belong to the same brotherhood as Mayweather, Andre Ward, Nonito Donaire, and a few others. Bradley’s boxing ability was enough to earn him an undefeated record and recognition as one of the best 10 or 15 boxers in the world, but it wasn’t enough to make him an attraction.

So he used his hard head, huge heart, and an ability to take one hellacious beating to turn the Provodnikov fight into another kind of spectacle. Bradley frequently ignored his trainer’s pleas to use his quicker hands and feet to out-move and out-box Provodnikov, and he nearly went down in a blaze of glory. But Bradley survived to win a close, unanimous decision, and along the way he probably reignited his career. He also fought his way back into the heart of Arum, who climbed into the ring after the final bell wearing a Mephistophelean grin and gave Bradley a warm handshake as if to say, “You might not be an all-time great, kid, but if you keep fighting like that you just might be a star.”

Kang: Between Bradley-Provodnikov and HBO’s March 30 rematch between brawlers Brandon Rios and Mike Alvarado, it’s hard to think of another month in which boxing fans are guaranteed to witness the genesis of more brain damage. In his post-fight interview, a light-headed Bradley said to Max Kellerman, “I think I got a concussion. I know I do. Without a doubt.” Bradley then chuckled and stared glassy-eyed into the lights before announcing, “I’m dizzy now.” It felt like a shocking revelation, given the sensitivity around concussions these days. (I’m certain that at some point in the upcoming weeks, Top Rank will put out a nicely worded letter to its fighters to please avoid using the “c-word” in future interviews.) Boxing still operates like it’s 1965 — football announcers might talk tough about the sacrifices a player makes when he decides to strap on a helmet, but nothing compares to boxing, where the evidence of brain damage hangs over nearly every great fighter. These things are rarely publicly discussed in the sport — if you hang around enough gyms, you’ll come across guys asking after old fighters and whether or not they seem “punchy,” but we do not see those same old fighters standing up to form fighter safety committees or sponsoring studies on CTE. This, of course, is because the best thing you can do in the ring is give the other guy a concussion. This will never change, and boxing, for better or worse, will be populated by impoverished kids willing to make a macho sacrifice. For those reasons, serious talk of concussions and CTE may never start in the sport.

There’s a willful disconnect between what I, as a sports fan, now understand about the long-term effect of concussions and my continued love of what Joyce Carol Oates called “the cruelest sport.” I have no real defense for this ethical oversight, but that doesn’t mean it doesn’t ring through my head every time I watch a fight like Bradley-Provodnikov. I suppose it’s the stupid compromise all fight fans make these days.

4. What if the referee had called a knockdown against Bradley in the first round?

Bartholomew: With 28 seconds left in Round 1, Provodnikov hurt Bradley with an overhand right while the two exchanged blows in the middle of the ring. Bradley managed to stay on his feet for almost five seconds after the punch, but he eventually fell forward while in a clinch with Provodnikov. Referee Pat Russell should have seen that Bradley’s fall came from the lingering effects of the big right-hand shot, but it was a difficult call to make at the moment when Bradley went down. It wasn’t until Bradley tried to stand up and stumbled backward, then fell down again, and then rolled over on the canvas that it became obvious how badly hurt Bradley was and that he hadn’t slipped or been pushed to his knees.

If Russell had ruled the knockdown, Provodnikov would have won the first round 10-8 and it would have changed the outcome on the scorecards to a draw. But is it also possible that Russell might have stopped the fight in Round 1 if he hadn’t missed that call? When a fighter suffers a knockdown, then falls back down and flops around on the mat before staggering to his feet, then makes googly eyes and goofy smiles at no one in particular, it’s not uncommon for a ref to stop the fight right there. That was Bradley’s condition in the first round Saturday night, but Russell had no grounds to call a stoppage because Bradley hadn’t officially been knocked down.

Remember Kostya Tszyu’s knockout of Zab Judah almost 10 years ago? If Russell hadn’t missed that knockdown, Bradley-Provodnikov might be an early front-runner for upset of the year instead of fight of the year.

5. How scary/awesome is Ruslan Provodnikov?

Bartholomew: When I see Provodnikov in the ring, I can’t stop thinking of Woody Allen’s line from Annie Hall: “My grammy never gave gifts. She was too busy getting raped by Cossacks.” I’m ashamed to admit this because Provodnikov does not identify as Cossack and he is also not a rapist. But as a fighter he makes your mind leap and reach for any comparison — even really ignorant ones — to describe how ferocious he is.

Kang: When the Russian language broke away from the Slavs in the 14th century, the stewards of the new tongue came together to discuss the best way a man could say the following two phrases: “I did not feel his punches” and “He hits like little girl.” Seven hundred years later, we still see their handiwork in Russia’s great fighters. Point in fact: Nobody, not even Antonio Margarito, can say, “I did not feel his punches” better than a Russian boxer. It’s just one of those instances where cultural relativism falls apart. Here’s four great minutes of Provodnikov after the fight looking like an alien is about to bust out of his skull.

We Went There: 20 Observations From the Heat's 22nd Consecutive Win