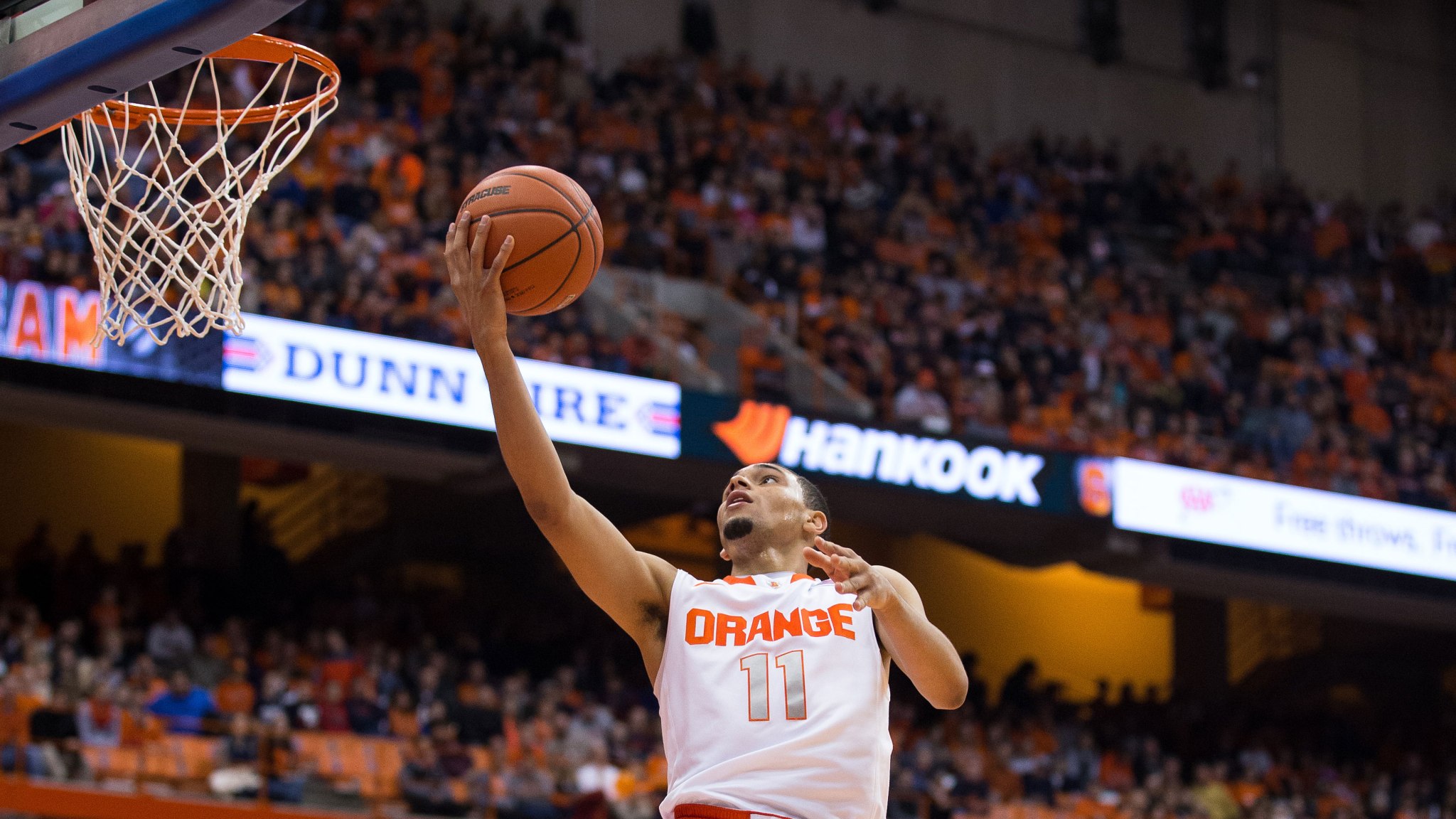 When Syracuse announced it was jilting the Big East in favor of the sexy Atlantic Coast Conference, the proper response was to mourn the loss of its sacred basketball rivalries with Georgetown and UConn. But behind the woeful jeremiads bubbled an urge to see how the Orange stacked up against Duke and North Carolina, two teams with obnoxiously overwrought legacies, endless hype, and annually heralded recruiting classes.

So far? After opening with a 17-0 record, including last weekend’s obliteration of the Tar Heels, second-ranked Syracuse is looking like the real powerhouse in the ACC.

Maybe it is. In the last two NCAA tournaments, Syracuse has advanced to the Final Four (2013) and the Elite Eight (2012). And in the last five NBA drafts, the Orange have farmed out a trio of top-six selections (Jonny Flynn, Wes Johnson, Dion Waiters) plus Michael Carter-Williams, the 11th pick in this year’s draft, who is cruising toward the NBA’s Rookie of the Year award. After passing Bobby Knight last season, zone-master Jim Boeheim is second in all-time men’s Division 1 wins, trailing only Duke’s Mike Krzyzewski. Yes, Syracuse has far fewer championship banners than the time-honored czars of the ACC, but the Orange are just as relevant in 2014.

It’s always difficult to gauge the quality of the Orange until late in the season. The team customarily amasses an impressive early record by trouncing cupcakes, and it has already feasted on frosting like Cornell, Colgate, and Binghamton. As the schedule has toughened up, Syracuse added victories over Baylor (currently no. 12), Villanova (no. 6), and bold-faced names in Indiana and North Carolina. But it’s worth mentioning that only six of the team’s 17 wins have taken place away from the Dome.

Syracuse has a legitimate senior star in leading scorer and ACC Preseason Player of the Year C.J. Fair, a couple underclassmen with high-level professional talent, and a seasoned frontcourt that is simply big as shit. In a year when all attention has been lavished on freshman one-and-dones, the Orange’s well-constructed, veteran squad is both a luxury and a rarity.

And, of course, there’s that zone defense. A rudimentary 2-3 is the refuge of lazy-ass pickup squads or junior varsity scrubs, but the Boeheim Mutation combines quick adaptability with personnel who were born to be instruments of suffocation.

Boeheim has become so adept at recruiting the cogs for his system that it’s almost cheating. The team’s mantis-like forwards, Fair and Jerami Grant, are spry enough to close out on 3-point shooters near the break while still providing weak-side rim protection. The center is anchored by Rakeem Christmas and Baye Moussa Keita, a 13.5-foot platoon of sentinels who are each responsible for roughly eight boards, two blocks, five fouls, and a couple of passes clanging off their cement-block hands per 40 minutes on the hardwood.

When the zone is at maximum viscosity — which is more or less always — victims are engulfed in traps on the sideline and in the short corner, opposing bigs are forced to quickly shovel precise interior passes, and shot clocks dwindle without the possibility of a governor’s pardon. As anyone who witnessed the Hoosier meltdown against the Orange during last season’s NCAA tournament can attest, it’s a nasty riddle to solve. This season’s team doesn’t have the same elastic perimeter length at the guard position as previous classes, but it’s still fifth in the nation in steals. And while Villanova and Boston College proved this Syracuse defense is more vulnerable to the 3 than usual, not too many teams can drain them all night.

Thanks to the draft and graduation, the Orange lost three of their top four scorers —Carter-Williams, James Southerland, and Brandon Triche — and entered the season with a barren backcourt. The only notable returning guard is sophomore Trevor Cooney, who played 11 minutes a game and shot 32 percent from the field last year. Now inhabiting the cherished Gritty White Gunner role popularized by Gerry “The God of Scranton” McNamara and Eric Devendorf, he’s flinging up nine 3-point attempts and scoring more than 18 points per 40 minutes. Cooney is very streaky, as evidenced by his 4-for-17 performance against the Tar Heels, but is inevitably involved when Cuse rips off a double-digit, foe-disemboweling scoring jag.

Still, because of the lack of depth or experience in the backcourt, no player has been as important as freshman point guard Tyler Ennis. Preternaturally polished, he’s already being mentioned as a potential first-round pick (some draft seers predict he could go as high as the lottery). Ennis is a bit like Andre Miller: persistent at getting to the cup, a tough rebounder for only standing 6-foot-2, the bearer of stoic poise. Without many teammates able to create their own shots, his stingy 3-to-1 assist-to-turnover rate is what gives the Syracuse offense a semblance of intelligent design in the half court.

No, the Orange offense isn’t an elegant orchestra of ball movement. Outside of Ennis’s distribution and drives, it mostly consists of Cooney hoisting 3s and Fair jab-stepping a few times before lobbing up his beloved midrange jumpers. But it doesn’t really matter, since the team generally gets as many attempts at the basket as it desires. The front line — especially Grant, the team’s leading rebounder and arguably the most brain-warping athletic freakazoid in this year’s NCAA (sorry Andrew Wiggins!) — is relentless at pounding the offensive glass. After racking up 14 offensive rebounds against Boston College and 17 against North Carolina, Syracuse has now taken nearly 130 more field goal attempts and nearly 110 more free throw attempts than its opponents. There’s wiggle room for an occasional squandered possession here.

It’s early, and significant tests are on the horizon. This weekend, Syracuse squares off against no. 22 Pitt, a fellow Big East refugee who is also undefeated in conference play. And no. 23 Duke invades the Carrier Dome on February 1. But for the moment, Syracuse is the newborn king of the ACC.