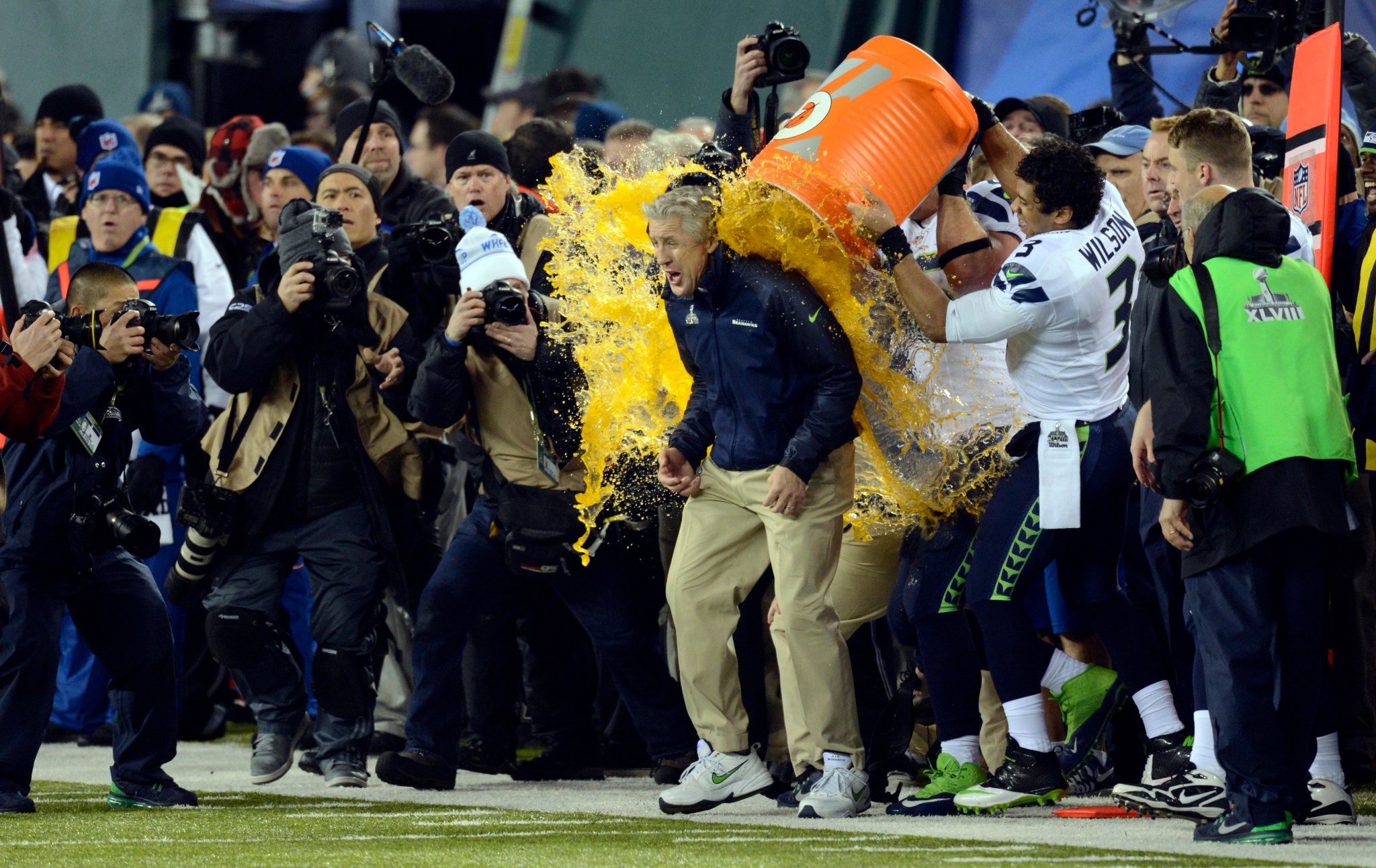 The Legion of Boom in the secondary, the defensive line that didn’t have a nickname but was just devastating all year, Pete Carroll with two weeks to prepare, Marshawn Lynch, the possibility of Percy Harvin, Russell Wilson making just enough plays on offense … All of it would be too much for Peyton to handle.

So all week long around New York City, everyone I saw, I would ask, “Do you really think the Broncos have a chance Sunday?” Some would say yes of course they do, others would agree with me, but in retrospect, the most amazing thing about Super Bowl XLVIII is that the Broncos were favored for two weeks.

I was completely biased, of course. Biased enough so that I never wanted to outright predict a blowout, for fear of jinxing it all. The Seahawks are a team I’d fallen in love with over the past few months. Not really because of all the winning, but how they won, and who was winning.

The more I read about them, the more I got hooked. One thing that popped up over and over as I went down the Seattle wormhole was the players talking about preparation. Whether it was Earl Thomas, Kam Chancellor, or Richard Sherman, they all said basically the same thing. People see them talk trash and look cocky, but all that confidence goes back to preparation. They work so hard during the week that by Sunday, everyone’s relaxed. Winning is just a reflex. That’s what the Super Bowl felt like.

The Broncos’ best chance to win this game was to dink-and-dunk the Seahawks to death, but right then, it became clear there was going to be a price to pay on every single one of those routes. Denver was already down 5-0 at that point, but when Chancellor delivered that hit and Earl Thomas ran over and bounced into his arms, it was already over. They’d been working two weeks for this. The game was just the fun part.

Once Percy Harvin ran the kick back right after halftime, the only question was how ridiculous it would be at the end, and how ruthless the Seattle defense could be in the meantime.

I watched the game from the top row of MetLife Stadium with some friends, and at one point in the second half, one of them yelled, “WOOOOOOOOO! Glad 80,000 people showed up for Peyton Manning’s funeral!”

Football games are the best. And this is a good place to admit that watching the Seahawks play taps into a side of me that would be hard to explain to my girlfriend, and definitely hard to explain anytime I act concerned about concussions. When I watch this team, I’m not just rooting for them to force someone into a three-and-out, but to do it by making Demaryius Thomas think twice about ever going over the middle against Kam Chancellor again.

It’s definitely weird in 2014 to love a team for punishing people, when we know more than ever what kind of toll football’s punishment takes on the people who play it. And I don’t know if there’s ever been a team that exposes the hypocrisy in football better than this season’s Seahawks — they’re the most exciting team in football not in spite of the punishment, but precisely because of it. It’s just too good not to love. They play games that remind you of Patrice O’Neal’s “Take his socks!” standup. It’s a kind of football that doesn’t happen anymore. It’s why Seattle’s defense was more exciting than Denver’s offense all year.

There are the PEDs, too. Seattle’s had scandals with performance-enhancing drugs for the past few years, so plenty of people think it’s hypocritical to cheer for them now. It’s hard to mention this team without acknowledging the cloud of rumors and accusations and Internet comments that follow them through every success. But the answer here helps me reconcile the hypocrisy about the hitting, too.

If anyone on Seattle is on PEDs, the one thing we can say for sure is, they aren’t the only ones taking some cocktail of legal and illegal drugs that help them play every week. If a handful of positive tests in three is enough to make you hate the Seahawks, that’s fine, but I can’t really bring myself to care. Knowing everyone’s on some batshit combination of stimulants and anti-inflammatories, knowing most of these players will probably spend the rest of their lives living with the consequences of playing eight or 10 years in pro football … all of that has made football a guilty pleasure for anyone who pays attention.

I think I love the Seahawks because they make the guilt worth it. As the game gets progressively softer without actually getting much safer, a team like this keeps it fun. If we’re going to watch football, let’s get the real thing. 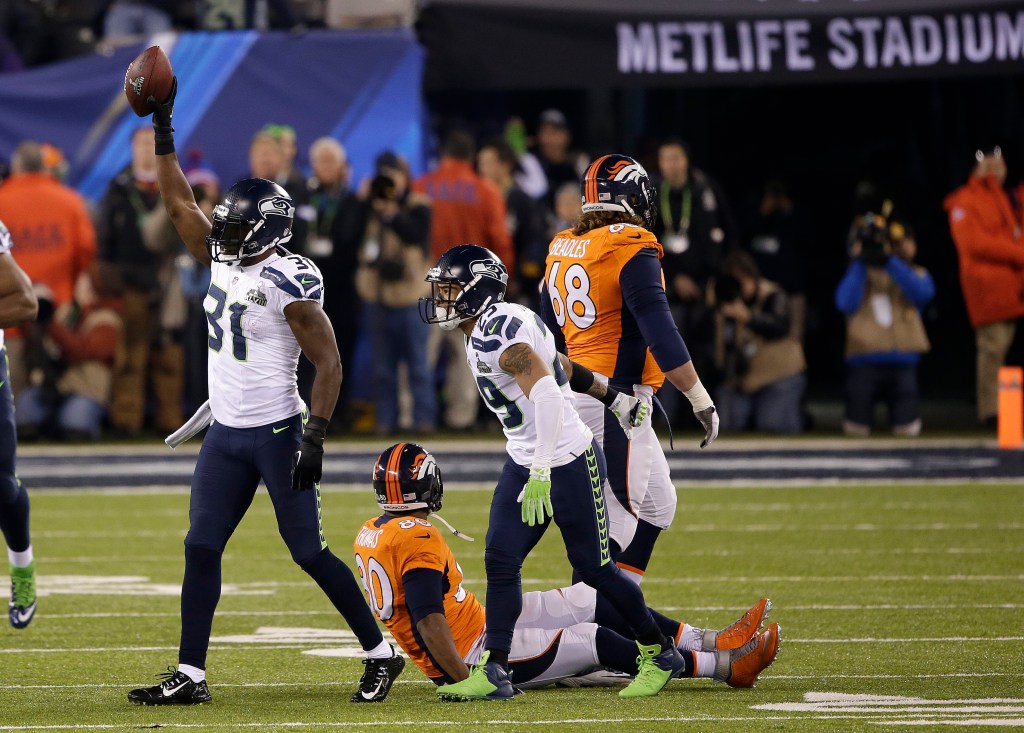 We got that from Seattle all year, and they did it with one of the most enjoyable cast of characters we’ve seen in years. Pete Carroll, the hyper-positive gym teacher who made us all realize that not every football coach has to be an asshole. Russell Wilson, the quarterback who’s humble and hardworking enough to make us all sick of hearing about how humble and hardworking he is … only I think all the anecdotes are true.

Richard Sherman, the relentless trash talker who backs it all up on the field, then talks some more, and turns out to be as impressive as anyone in the league. Kam Chancellor and Earl Thomas. Chancellor watches highlights of Sean Taylor before every game, and Thomas went to the Super Bowl last year to watch Ed Reed. Both of them are doing a pretty solid job carrying on the legacies of their heroes.

In between those names you’ve got guys like Michael Robinson, whose story needed its own piece; Red Bryant, Cliff Avril, and Michael Bennett, three defensive monsters who’ve wreaked havoc in the shadows all year, and Harvin, the superstar who didn’t show up all year until he made this team more or less unstoppable in the Super Bowl. With him as the spark on offense, Seattle became that much more unfair. How much would the line have swung if everyone knew that was the Harvin that Seattle was getting Sunday?

And Marshawn Lynch, the dude who’s just trying lay back, kick back, mind his business, stay in his own lane, and then win everything. Football always has one or two fun teams like this, it’s just rare to find one that also happens to be the best. 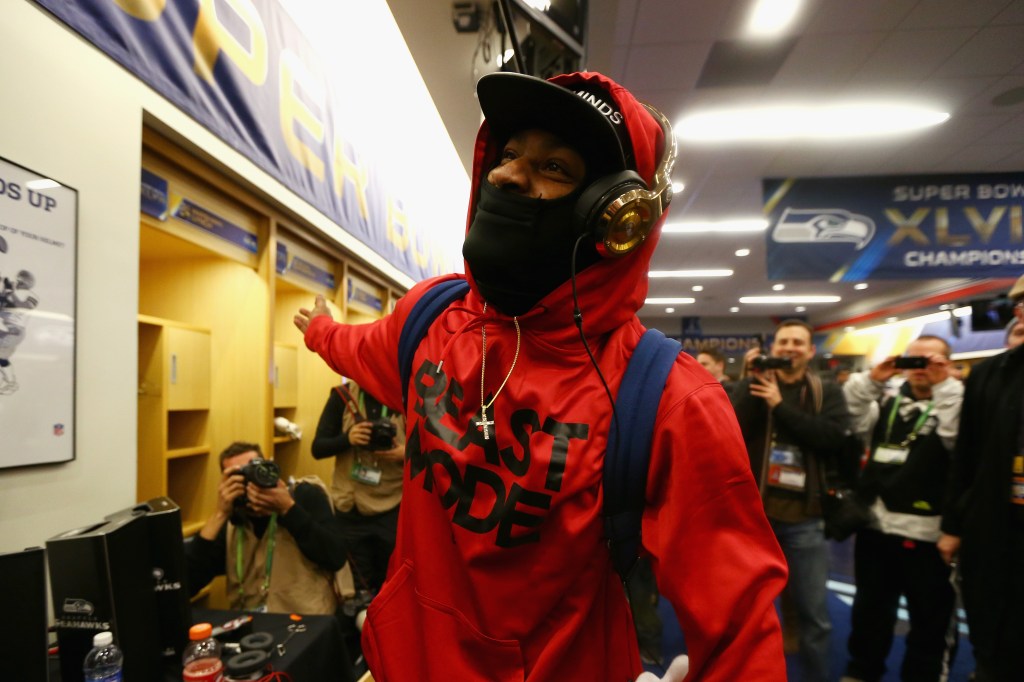 There were other memories from my first Super Bowl. Going through security with 300 other people in what felt like some kind postapocalyptic processing tent. Taking a picture of this tent, getting pulled out of line and forced to delete the photo. The strange mix of the worst rich people who didn’t care who won and the biggest diehards who flew in for the game. The guy in front of me from Seattle who brought his grandma so she could see it, too. The crime of having this game in New York City and not forcing Jay Z to perform at halftime. The lights going down for halftime, and my entire section suddenly smelling like weed. All kinds of little things I’ll remember.

There were other storylines, too. The Peyton stuff. As good as everyone has gotten at beating back hot takes and ignoring questions about “legacy” and whatnot, losses like this will be part of what we remember him for, which I think is literally what everyone means when they talk someone’s legacy. Whenever it’s over, it’s possible for us to baffled by how good he’s been and baffled that he didn’t win more. But then, if you’re having that discussion after this game, it’s probably important to remember the exact same thing would’ve happened to Tom Brady if he’d played the Seahawks on Sunday.

And the New York part of all this. In the end, it was a success. New York’s not a perfect host city — correction: New York–New Jersey  — but I think everyone was so terrified of this turning into a disaster that we avoided the worst-case scenarios all week. Everything was planned obsessively, and then executed without a hitch. The train on the way back sucked, but it wasn’t much worse than I’d imagine transportation at most Super Bowls is. And all things considered, it was cool to put the game in the biggest city in America for a year. I mean it was insane, but it worked.

But all of that felt secondary Sunday. Nobody who walked out of the stadium was going to go home and remember anything from Sunday night beside how stupidly great the Seahawks looked.

It was different from most other Super Bowls in the new millennium. If you look back at all the recent history, almost every game has been outrageously dramatic. It’s how all of football’s been. As parity has set in, the NFL’s gotten more and more competitive, and with a mostly level playing field, we get some of the closest games we’ve ever seen. This happens every single week. Sunday Night Football almost always comes down to the final minutes. So when it all happens in the Super Bowl, in front of 100 million people, it’s hard not to be baffled by how this sport churns out this much drama every year.

At the same time, if you think back over the last decade or so, unless you’re a fan of one of the teams that won, there aren’t actually that many Super Bowl teams we’ll be talking about 10 years from now. Not like the ’90s Cowboys or the Niners in the ’80s, full of stars who still loom large, who dominated in a way that resonates for decades. Maybe the Patriots count in this category, but beyond Tom Brady, how many players can a non-Patriots fan name from the team that won in 2004?

The parity-era trades unforgettable teams and gives us unforgettable games instead. So a blowout was kind of nice for a change. The perfect ending to a season where Seattle was always on a whole other level. Something that shouldn’t even be possible in 2014.

Somehow the NFL’s formula got flipped. Instead of a great game, we got a great team. The Seahawks played the most dominant offense of all time and one of the greatest quarterbacks we’ve ever seen, and it was over by halftime.

This team’s motto the past two years has been bigger, faster, stronger, louder, and it’s never fit better. I think it’s technically a fact now.