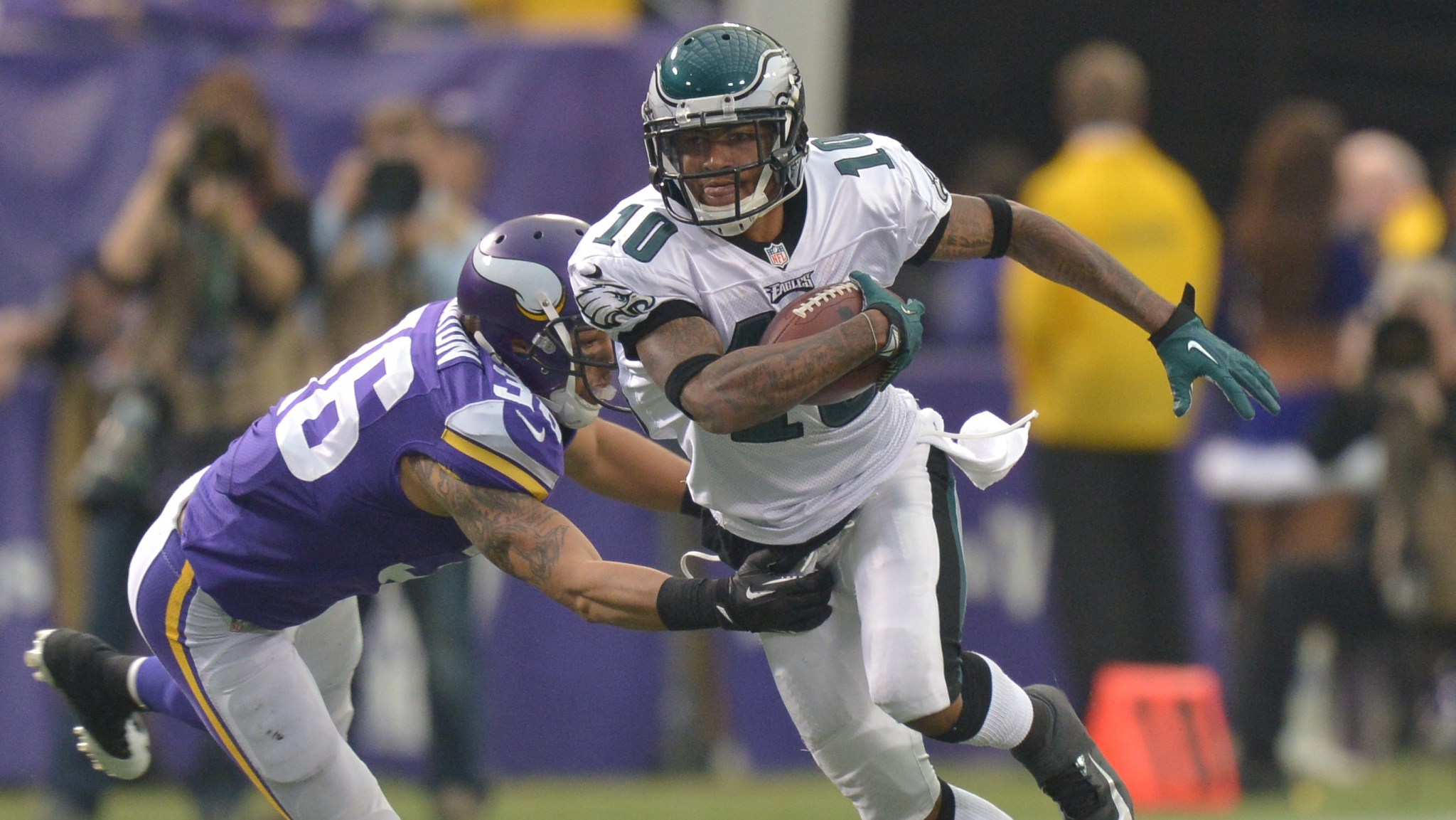 I’m traveling today and we’ve got a bunch of other stuff going up on the Triangle, so we’re gonna keep this quick.

BEST: DeSean in D.C. First, it gives football fans something to argue about for the next five months, so I’m excited regardless.

Second, there are really no bad outcomes from an outsider’s perspective. Either this becomes a complete mess and the Redskins are still the Redskins, or it works, and we get to watch DeSean Jackson and RG3 torch people and potentially go nuts on the Eagles.

For what it’s worth, I think a pissed-off DeSean Jackson was worth a gamble for any team. If you’re a good team, then it was worth it because there’s a strong locker room in place that can keep him in line. If you’re a bad team like the Redskins, it’s worth it because … why not? Might as well see if you can steal a star. It’s not like Santana Moss was going to magically get seven years younger.

This whole time, it seems like a lot of people were forgetting just how awesome DeSean is at football. He’s got game-breaking speed, he’s tougher than most guys his size, he’ll have one or two big plays on offense every game if you use him right, and he can make plays on special teams.

Most importantly, he’s got the psychotic Napoleon complex that makes someone like Steve Smith dangerous. And now he’s gonna be twice as pissed off. That’s gotta be good, right? Maybe?

1. If the whole thing turns into a disaster, this photo becomes another wonderful keepsake from the long history of Skins free-agent moves.

2. The story behind the photo in back of him is actually really cool: “According to Cpl. Lodder’s caption, the dog in the photo, Blue, detects improvised explosive devices. Blue is protecting his handler, Marine Lance Cpl. Jarrett Hatley, 21, of Millingport, North Carolina, as he takes a quick nap (covered by a Washington Redskins blanket) after helping Afghan National Army soldiers clear compounds in the central Helmand River Valley, a volatile area rife with threats from insurgents and terrorists.”

A month after that photo was taken, Blue the dog sniffed out an IED that saved 12 people’s lives. Dogs are the coolest. This whole story is the coolest.

WORST: That photo. While the real story is amazing, it’s a little disappointing to find out that Daniel Snyder didn’t just randomly order someone to Photoshop a Redskins blanket into a photo of American soldiers.

“Tradition keeps us all warm at night,” I imagine him saying.

BEST/WORST: The DeSean Jackson conversation. There were a handful of obnoxious columns we could talk about here, but screw it. This whole thing was also a reminder that there are plenty of smart, levelheaded people out there. The best insight into DeSean came hours after he was released a week ago, when former Giants running back Derrick Ward took to Twitter to clear some things up.

There was also Richard Sherman here, and Mike Tanier over here. The Tanier piece is particularly dead-on about how most of us can process this news:

As for Jackson, we know less about his personal habits or his connections to the connected than we did when we started. Such ignorance can only make us wiser.

I’m not going to pretend Jackson’s a criminal because of Instagram photos, but I also won’t go off and defend his honor. The biggest lesson for me came when this news broke, and I started to have an opinion, and then realized I had no idea what DeSean’s personal life looks like, good or bad.

Even with Twitter, Instagram, 24-hour sports coverage, and endless sound bites, the same is true for pretty much every athlete we watch. Some of the guys who act insufferable on the field are probably the nicest people you could ever meet, and others who go out there and just do things The Right Way are horrible in real life.

Sometimes it’s good to remember all that. We can know only so much. And when people are speculating about a guy’s childhood friends and what they say about his character, it’s OK to admit you have no idea.

BEST: Draft day. If Johnny Manziel takes off in the NFL, his ongoing spiritual union with Drake will drive football people completely insane.

WORST: People criticizing Daniel Murphy. Sometimes we need a reminder that a lot of folks take sports way too seriously. And when a professional athlete decides to miss a game to attend the birth of his child, hoooooo boy do we get that reminder.

Daniel Murphy missed the first two Mets games of the season to be there for the birth of his son, and this upset a lot of people. Like Mike Francesa:

“You’re a major league baseball player. You can hire a nurse,” Mike Francesa reportedly said of Murphy on WFAN Radio during Wednesday’s show. “What are you gonna do, sit there and look at your wife in the hospital bed for two days?”

And then Boomer Esiason:

On another WFAN show, host Boomer Esiason said, in part, that Murphy’s wife should have had a “C-section before the season starts.”

Putting aside that amazing suggestion from Dr. Esiason … The craziest part of this backlash is that there are 162 baseball games. People are mad at him for skipping two? Skip 50! Daniel Murphy could be there all spring. He’d still have plenty of time to hit .290 and play in 110 Mets games that will make Mets fans miserable regardless.

What an honor! Thanks for the #selfie, @BarackObama pic.twitter.com/y5Ww74sEID

And a day later, we found out it was all a promotion for Samsung.

This should have been incredibly depressing, just like all #VIRAL ad campaigns. But after an initial rush of rage, I quickly changed my mind. Because David Ortiz is getting rich, and that should make everyone happy. And just as important, it’s impossible to ever actually be mad at David Ortiz. That was the biggest lesson from this.

Can you imagine if another athlete had tricked the president of the United States into a #selfie cell phone promotion?

If LeBron did this, Skip Bayless would declare a state of emergency on First Take. If Richard Sherman does this when the Seahawks visit the White House this summer, there will be congressional hearings. If Dwight Howard ever did it, he would be exiled from the United States.

Papi does it? People get upset for a second, and then we all mostly just forget about it. David Ortiz is bulletproof.

Did you know the Charlotte Bobcats created an official, paint-themed Al Jefferson website?

Between that, Zach Lowe’s recent column, their mascot …

And the gospel of McBob … 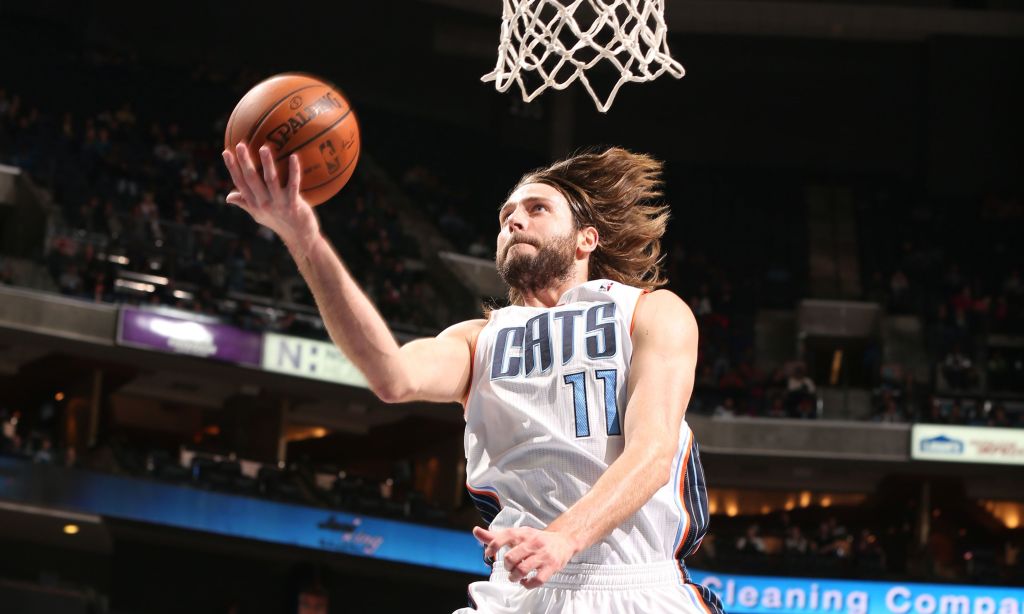 BEST: These two Thunder fans. After the dunk.

BEST: Russell Westbrook on the warpath. He plays so angry, and it makes the whole word so happy.

WORST: Big Baby was in Orlando for two years. Nobody watches the Orlando Magic, not even their family members. The best part about Big Baby going to the Clippers was getting him back in the spotlight. We need more stuff like this in our daily lives.

BEST: The McDonald’s All American Game. There’s a recruit named Theo Pinson who dunked over his mother in a dunk contest. The future is bright for all of us.

BEST: Dirk and the Mavericks will not die. A lot of casual sports fans think that NBA players don’t try during the regular season. On some level, it’s true. If you watch enough NBA games, you will see a different team mailing it in every night. If you watch the best teams, you’ll see guys who’ve become masters of measuring their effort. Then there are teams like the Bulls or Pacers, who kill themselves every night, and sometimes end up burning out or breaking down before the season’s over. Eighty-two games is a lot.

All of which makes the Mavs that much more enjoyable. They had no business competing in the Western Conference this year, and that much was obvious on opening night. Even now, they’re on pace to win around 50 games, and they still might miss the playoffs. They’d be the third seed in the East, but the West is impossible.

But the Mavs keep killing themselves. They did it against the Warriors on Tuesday night and got their hearts broken by Steph Curry at the buzzer. Then Thursday, they went on the road against the Clippers and pulled off the upset. They’re like the Bulls, but fun.

Whether it’s Vince Carter hitting leaning old-man jumpers, Shawn Marion guarding four different positions and defying the aging process for one more night, Monta Ellis injecting a little bit of crazy energy into everything, or Dirk. Everybody on the Mavs will make you enjoy basketball a little bit more.

Especially Dirk. As he gets older and we all start to imagine the end of his career, it makes these last few years twice as enjoyable. The impossible step-back jumpers look easier than ever for him, and he can still go toe-to-toe with any superstar in the league in crunch time.

It’s April, so it’s probably too late to make Watching the Mavericks an official recommendation, but I just wanted to say that I’ve enjoyed Dallas this year more than maybe any team in the NBA. They’ve been fighting for their playoff lives for months now, and it’s been fun to watch. And they’re still not dead.

Oh, and also … The Final Four is here.

Cal: "I had to be wheeled in there in a casket and I opened it and said, 'We ain't dead yet, boys!' for my team to believe."

… is matched up against this coach.

Bo Ryan: "When somebody asks me about one-and-done, when I’d ask my mom for another pork chop, she’d say, ‘Nope, one and done.’ "

Arsenal, Everton, and the Race for Champions League Qualification