Best Hockey Day Ever! The U.S. Wins Gold at the World Juniors! 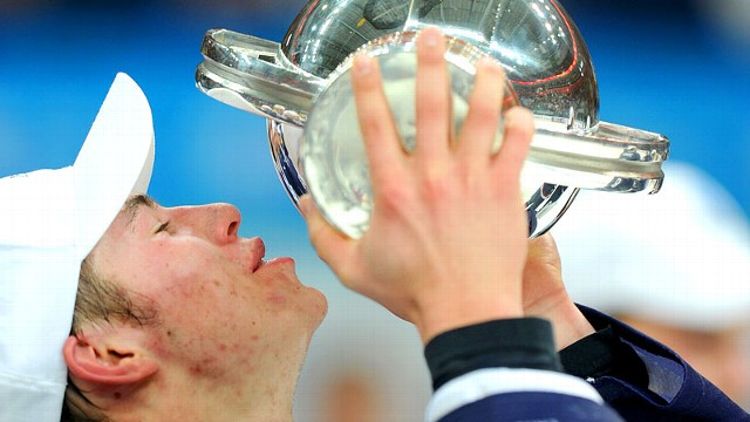 For the three returning players on the U.S. under-20 national hockey team this year, the memories of the 2012 World Junior Hockey Championships were painful indeed. Forward J.T. Miller, defenseman Jacob Trouba, and goaltender John Gibson were part of an American squad that had come into the tournament last year with high hopes and optimistic projections. Instead, the team ended up seventh out of 10 teams, avoiding the embarrassment of relegation but not the sting of missed expectations.

This year, though, it was a different story. With a nail-biting 3-1 victory over defending champion Sweden in the gold-medal game on Saturday night, the 2013 iteration of Team USA took home not only the WJC title but also the majority of individual honors for outstanding play.

Trouba, a first-round draft pick by the Winnipeg Jets this summer, was named the tournament’s top defenseman. Gibson, who was selected by Anaheim, earned best goalie honors and was named the overall MVP. And Miller, a New York Rangers prospect, could barely figure out how to explain how it all felt.

“I guess, selfishly, I don’t even know how to put into words what it means to me, and Trouba, and Gibson,” Miller said, gold medal dangling from his neck and his smile contagious. “Last year maybe we had more firepower, but we didn’t have the tight-knit group like we did this year. We always stick together, and that’s what helped us … We were down a goal there and we acted like nothing had even happened.”

After a decisive 5-1 win over tournament favorite Canada in the semifinal, the Americans gave up the first goal to Sweden, who had defeated Russia in a shootout in their own semifinal. Team USA had been watching that game from their hotel in Ufa, Russia, scouting out their potential opposition — until, with less than two minutes remaining in overtime, the power went out.

“Boom, it was done,” recalled forward Cole Bardreau, who plays for Cornell and was part of the American team’s so-called Grind Line. “It was like 15 minutes, too. Everyone was freaking and rushed down to the lobby.” (When asked if anything else wacky had happened while in Russia, Bardreau had a quick answer. “I broke a chair. I was sitting in a chair and it broke on me while I was playing poker.”)

Team USA’s general manager, Jim Johannson (an Olympian in 1988 and 1992) said that it was exactly those sorts of small inconveniences that helped bring the team together.

“Being in Ufa, Russia, helps,” he said, laughing. “When you’re here it’s hockey, and togetherness, and team, and not many external things. We’re in a world of social-device-everything-known-to-man.” (This made me laugh: Earlier in the week, Seth Jones had said he wasn’t sure if his friends or family had been texting him because he didn’t want to turn on his phone and face international roaming charges.)

Midway through the second period of the gold-medal game, with the United States still down 1-0, diminutive forward Rocco Grimaldi, a sophomore at the University of North Dakota who was drafted by the Florida Panthers, sped around the back of the goal and, not knowing what else to do, threw the puck at the net from just above the goal line. Somehow, in slow motion, it slipped awkwardly past Swedish goaltender Niklas Lundstrom to tie the game.

For Grimaldi, who entered the tournament as a player the U.S. hoped it could rely on for scoring but whose touch hadn’t really materialized (he was even benched during one game in the round robin) the goal “took the monkey and threw it off me.”

Indeed: Just a few minutes later, Trouba took a big shot from the point that hit off Grimaldi and went into the net for a 2-1 U.S. lead that they would never give up, despite some tense minutes near the end of the game. (“My heart was going through my chest,” Miller said. “I think I blacked out the last five minutes out there.”) An empty-net goal by Vince Trocheck sealed the deal.

“God is always faithful regardless of what you’re going through,” said Grimaldi, who is deeply religious and has said that he wants to be a pastor in his post-hockey life, whenever that may be. (He wants nothing more than to meet Tim Tebow, his “hero.”) “I was going through a rough time not being able to score. I thought I was going to come in here and really help the team by putting points on the board; that’s not what happened, but the Lord is still good and he got me through it, and now it’s something I can tell people.”

Grimaldi hails from Southern California; no longer is American hockey talent concentrated almost exclusively in the “Three M’s” of Michigan, Massachusetts, and Minnesota. There are guys on the WJC team from Pennsylvania, Ohio, Florida, Illinois, and Texas, among others. The majority of the players on the team went through the National Team Development Program, based in Ann Arbor, Michigan, and many have played together for years in international competition with the Under-17 and Under-18 teams. (The United States has won four straight golds in the World Under-18 Championship, with the last three coming over Sweden.)

“You don’t go to the gold-medal game hoping for a silver medal, I’ll tell you that,” said Wisconsin’s Jake McCabe, the team captain and a two-goal scorer in their semifinal win over Canada. “I’ve had international experience and I’m not used to not seeing the American flag going up.”

Of the six WJC players voted as All-Stars, four — McCabe, Trouba, Gibson, and slippery Boston College forward and Calgary Flames prospect Johnny Gaudreau — were Americans. “I couldn’t have dreamed of a better way to come back [after last year],” Trouba said.

After also being part of that seventh-place team last year, Gibson was named the tournament’s best goaltender and most valuable player this season. Throughout the tournament — he played every minute of every game in a grueling six-games-in-eight-nights schedule — he routinely performed what head coach Phil Housley described as “momentum saves.”

“That kid has been unbelievable,” Jones said. “He’s one of the best goalies I’ve ever seen and he’s a great teammate along with it, so he really won the tournament for us.”

With the tournament won, the U.S. players stood on the blue line watching the American flag getting raised and belting out the national anthem at the top of their lungs. I asked Jones who sang it best.

“Jacob Trouba,” he decided, just as Trouba walked over and threw his arm around his fellow defenseman, smiling a shit-eating grin. “Highest and greatest voice.”

It’s almost as if he spent the whole last year practicing.

Put Me In, Coach: Why More Minutes Won't Mean Less Success for the NBA's Underused