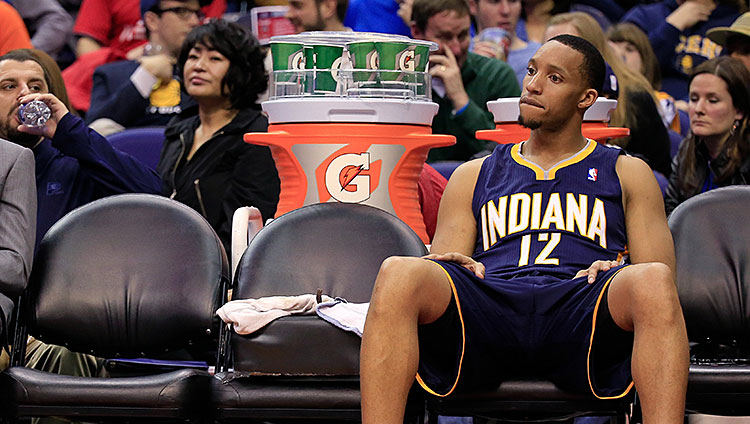 Chris Ryan: Corban, last night the Pacers lost by 26 to San Antonio. They have dropped three straight, and failed to get above 80 on the scoreboard in five of their last six. They are 12-11 since the All-Star break. Getting taken out to the woodshed by the hottest team in the NBA is not, in and of itself, the most surprising thing I’ve ever seen. Sometimes you get Popped. But for the Pacers, the loss seemed like a nadir of one of the more perplexing and, frankly, sad regular-season swoons I can remember.

And I can’t stop watching.

Indiana was inspiring early on — a 33-7 record to start the season, Paul George inserting himself in the MVP discussion if not the actual race, the “you shall not pass” routine on defense.

Its mission to get the no. 1 seed in the Eastern Conference, and guarantee a Game 7 against Miami would be in their gym, gave any given Wednesday-night game a little more meaning. These guys were treating the regular season like a knockout tournament. Even their losses — like the 106-102 thrill ride in Portland when George put up 43 — felt like moral victories. Screw jet lag; this was an elite team. The question was, could they keep this up? No, they sure as burning cornfields and crumpled-up Miller Lite cans next to Larry Bird’s recliner could not. Now their games have a different kind of meaning; we watch to see just how bad this all can get.

Corban Goble: At the beginning of the season, the Pacers were anointed as the team best equipped to unseat the Heat. The offense had inside-outside balance thanks to Roy Hibbert and David West anchoring the paint, and they ran an elite defense (in November, the Pacers posted a defensive rating of 88.6). But as the offense has slowly deteriorated over the course of the season — George boasted a November/December eFG% of 53.5 percent/55.5 percent before slipping into the low 40s in March — that elite defense has fallen off a cliff, making the offensive woes that much sharper. Also, their league-leading rebounding advantage has suffered in March, which not coincidentally featured 11 road games.

Monday night was brutal. I know the Spurs went undefeated in March and typically feast on teams with glaring fundamental issues, but woof. Just a five-way concert of bad body language out there. Midwesterners rarely eat their own, but the home crowd served the Pacers a hefty booing.

We’ve had plenty of players-only meetings and plenty of sit-downs as a team with coaches and we’ve had some upper management in here, so I don’t know. Maybe we should all go to group therapy or something, sit down with Dr. (Chris) Carr and figure out some of our grievances.

Bird put these guys on the Summer Jam screen in mid-March, and things have only deteriorated since then. Hibbert is talking about players being selfish, and last night he more or less conceded the Eastern Conference 1-seed to the Heat (“good for them”). Saddest of all? This team used to be FUN.

Goble: Yeah, and it’s interesting you say that because you would have never guessed they were fun going off their offense, even when they were clicking in November and December. But it’s a group that stays pretty loose off the court now just absolutely spazzing out on it.

Ryan: That’s the thing; they transcended whatever limitations they might have — basketball-charmwise — by having some legit, homegrown stars-in-the-making.

Goble: Hibbert just appeared on Joe Mande’s comedy mixtape and is something of a regular presence on Parks and Recreation. Lance Stephenson is the most Vine-able guy in the NBA, which perfectly dovetails his specific type of madness on the floor. George likes to go online.

The big problem, like you brought up earlier, seems to be that they have zero clue what to do with their rotation. NBA.com blogger Trey Kerby pointed out that the Pacers’ starting five has had an insane workload this season and the guys they’ve used to spell them aren’t cutting it. Your boy Evan Turner? I saw a lot of Rasual Butler on Monday night. Born Ready is that X factor when you can let him pick his spots, but he’s been on edge lately. I haven’t seen a good Lance Vine in ages!

Ryan: Turner played seven minutes last night! Last time I checked, the name plate on my desk didn’t say Frank Pembleton, but when these guys talk about selfish play, I feel like it’s pretty transparently about Turner. I have no evidence for this other than the following: (1) I watched Turner in Philly for several years, and (2) if they weren’t talking about Turner, they would say so. “Hey, it’s not the new guys’s fault. We have to mix him in, we have to play better as a team.” Nobody says that. Turner turned up and shit went totally Rumors. Maybe it’s not Turner. Maybe it’s Stephenson (George Hill was screaming at him during the Spurs game), or maybe George is shutting guys out (as Brian Windhorst alludes to here).

Goble: I always think about that front office — it’s like some crazy middle-of-the-map NBA dream team — Kevin Pritchard, Bird, and Donnie Walsh. They have to be ripping their hair out. Hibbert has issued like 70 “Hit ’Em Up” freestyles and no one seems to care.

Ryan: The front office has to shoulder some of the blame here, right? I know nitpicking Bird’s personnel moves is like standing over Elon Musk and asking how come the Tesla doesn’t talk like the car from Knight Rider, but Bird might have over-tinkered with this team at the trade deadline. Pretty much everyone thought Danny Granger had a fork sticking out of him, but check out this awesome 8 Points, 9 Seconds piece by Tim Donahue about Granger’s real impact on the team. West described Granger as “the blowout machine.” I would hate to hear what he calls Turner. And if you need a more verbose tribute to Granger, here’s a George quote from the post:

I think him playing that way, and him having that commitment to just be a playmaker — a floor general — for us, it really just flows through our whole offense … He has what our offense is all about, and that’s playing for one another. I don’t think they’re really giving him credit where he deserves.

Batman has left the building.

Goble: Chris, do you think the Pacers can pick up the shards here? There isn’t much time left, but luckily they still can probably eke out a first-round playoff victory. Or will they? Charlotte’s kind of a tough matchup all of a sudden. Do you think it’s possible for them to “regain fun”? Is this just the world’s most elaborate and intensive faux-suck for April Fools’ Day?

Ryan: The two teams that played in last season’s NBA Finals are playing their best basketball of the season. After the Heat beat the Raptors last night, LeBron was talking about how Miami can “smell” the playoffs coming. So, yeah, when LeBron is out there on the log, waiting for the Predator …

… I’d say it’s the wrong time to go to group therapy. Indiana fans should take heart in the idea that the Pacers beat the Heat and Bulls in recent weeks. And they should worry about how they haven’t really beaten anyone else. They gotta figure it out, though. The playoffs are a lot of things. This is nobody’s idea of fun.