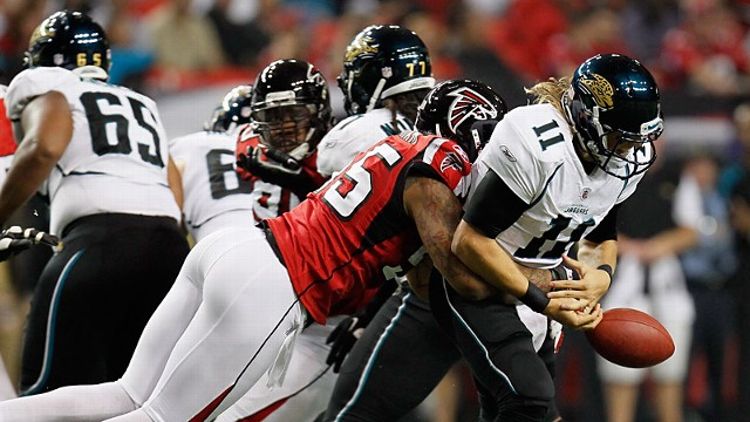 Ladies and gentleman, we live in the golden age of Bad Quarterbacking. Teams are throwing the ball more than ever and star running backs are an endangered species, but there are also fewer good quarterbacks than ever before. All of it means that there are more opportunities than ever for bad quarterbacks to spread their wings and fly straight into a plate-glass window.

It’s a beautiful thing. Jacoby introduced the Bad Quarterback League (BQBL) a few years ago with the following premise:

There is too much attention and praise showered on the modern elite quarterback. The Tom Bradys, Peyton Mannings, and Aaron Rodgers of the league are celebrated as genius demigods, just because they can make split-second decisions and deliver precise passes while being chased by gigantic men who spent an entire week figuring out ways to injure them. Blah fucking blah. The more compelling narrative is that of the modern failure. Because when things go wrong for an NFL quarterback, they go spectacularly wrong. And there will be no shortage of that this season. On-field arguments. Botched handoffs. Locker room backstabbing.

So, here we are again. They asked me to take the reins of the BQBL this year, so every week I’ll recap all the best terrible quarterbacks the NFL has to offer. We’re skipping the part where this is an actual league among Grantland staff, but if you want to draft players and run a league of your own, we’ll have stats here every week to help you keep track. (To see how all this is scored, check this old Jacoby post.)

There are so many more bad quarterbacks than good ones. It’s a whole new game once you start cheering for the worst of them. So to help set the mood for a brand new season of bad decisions, who are this year’s best bad quarterbacks?

Ben Roethlisberger and Philip Rivers. We have to mention them somewhere, because one or both of these guys is going to fall off a cliff soon. As it stands, Roethlisberger is the worst good quarterback of all time. He’s constantly playing with a broken foot or cracked ribs or something else that gives him the benefit of the doubt, but still. He’s the king of throwing for 110 yards, one interception, and no touchdowns and still somehow getting the win. If he spent the past decade with the Panthers, he’d have maybe one playoff win and nobody would blink an eye. Because again, he’s not actually that good.

Rivers, on the other hand, is just good enough to make any bad Chargers team competitive, but never quite good enough to actually win anything meaningful. Kind of like Jay Cutler. It’s a special class of bad quarterback.

This year? Both guys are older and beaten down from years of taking too many hits. Both guys have less weapons than ever. Both play for teams that seem destined to go 6-10 or 7-9. I’m just saying … At some point these guys will go from secretly terrible good quarterbacks to just plain old bad quarterbacks. Could this be that year?

Josh Freeman. Freeman’s career arc is a dead-on simulation of what Roethlisberger’s career would have been like if he’d wound up on any team but the Steelers.

10. Carson Palmer. Just famous enough for desperate teams to convince themselves he might be good. He threw for 4,000 yards last year! Who cares if the Raiders went 4-12? Now he’s in Arizona, and right, definitely, that Bruce Arians offense should be great for him. Just wait until he gets to use all those weapons they have. Of course he’ll stay healthy.

This is gonna be great, right?

9. Alex Smith. Smith was firmly “satisfactory” under Jim Harbaugh for two years, and we all rejoiced at this, because Smith seems like a pretty decent guy, and it was nice to see him avoid becoming a complete bust. But then Colin Kaepernick came along and everyone realized just how terrifying the 49ers could be with an actual good quarterback, and it shook us out of our “Alex Smith is actually pretty good!” fever dream.

Now? He’s not with Harbaugh anymore, and before everyone picks the Chiefs as their sleeper this year, it’s probably important to look at Smith’s stats in all the years he wasn’t coached by Psychopath Jim Harbaugh. Andy Reid is a fine coach, but it takes a special kind of micromanaged insanity to somehow make Smith a good quarterback, and Reid is just not on Harbaugh’s level in that department.

8. Jake Locker. He would probably be higher on this list, but I successfully avoided watching a single Titans game last year, so who really knows. He’s got all the physical tools, people say. So did Akili Smith. Is Jake Locker the white Akili Smith? 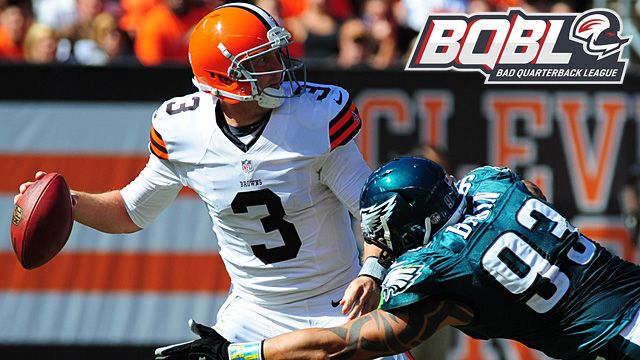 Next to all the other rookie quarterbacks who came in and set the world on fire last year, he is Jason Campbell 2.0. Not bad enough to give up on entirely, but definitely not good. This week his offensive coordinator told the media, “I think every day he walks onto this field he is going to get better, I really do. I believe in Ryan Tannehill.”

I’m telling you, this is only the beginning.

5. Mark Motherf---ing Sanchez. Bad quarterbacking is an art, and Sanchez is putting the finishing touches on a years-long masterpiece this year. He’s not as classically terrible as some of the other quarterbacks on this list, but that’s what makes him great. While others struggle in conventional fashion, he’s out here reinventing the genre, expanding our understanding of what’s possible.

Throw in Geno Smith starting the season and/or running out of the back of the end zone and now Brady Quinn coming on board, and the Jets are well-positioned to own the BQBL every single week this season. That’s before you remember Greg McElroy and Tim Tebow last year, or Browning Nagle from the ’90s.

When it comes to bad quarterbacks, the Jets are like Nick Saban’s Alabama teams the past few years. They don’t rebuild, they just reload. The machine never stops.

4. Christian Ponder. When he announced his relationship with Samantha Ponder, he had a pretty great sense of humor about it all. He seems like a good guy, and it would be nice if Adrian Peterson didn’t play his entire prime with horrible quarterbacks. We don’t want Ponder to be part of the BQBL. So maybe this is the year he turns the corner?

Bonus bad quarterback points awarded here because the Vikings would actually be pretty great if they had a decent quarterback. Ponder is the only guy on this list who’s actively sabotaging a playoff team.

3. E.J. Manuel/Jeff Tuel/Thaddeus Lewis. The only reason the Bills aren’t no. 1 on this list is the slim possibility that Manuel plays all 16 games and surprises people. He looked solid in those two preseason games, he’s starting on Sunday, and that means there’s at least a tiny sliver of hope when you look at the Bills’ depth chart. At least for the next few days.

But if Manuel never gets totally healthy, Tuel comes back into the picture, and those two are platooning with Lewis all year? We could be looking at one of the most disastrous quarterbacking situations in NFL history. 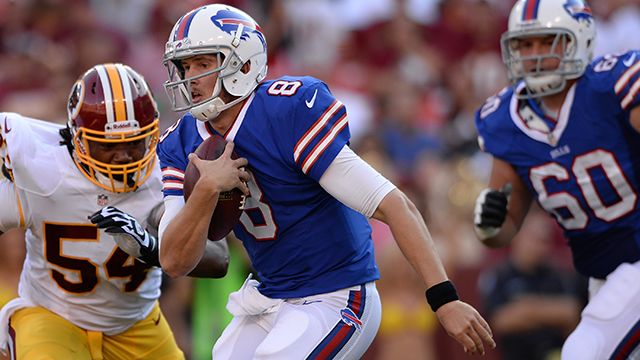 2. Terrelle Pryor/Matt Flynn/Matt McGloin. Oakland will reportedly start Pryor in Week 1, and that’s great news. I’ve been Team T-Peezy ever since Roger Goodell somehow got away with suspending him in the NFL to punish him for NCAA violations. It was maybe the most ridiculous move Goodell’s ever pulled. And nothing would make me happier than Pryor rising from the ashes in Oakland and becoming a one-man wrecking crew on offense, leading the Raiders to a shocking playoff berth, and in the process taking over the world for six weeks kinda like Willie Beamen in Any Given Sunday. He could start an ongoing Bay Area beef with Kaepernick, record some terrible commercials, and people would remember that Darren McFadden exists. It would be great.

But none of that will happen. More likely: Pryor will struggle and then get hurt by October, Flynn will take over for a few weeks after that, and by Thanksgiving the Raiders will be starting McGloin and gunning for Jadeveon Clowney. Pray for everyone involved here. 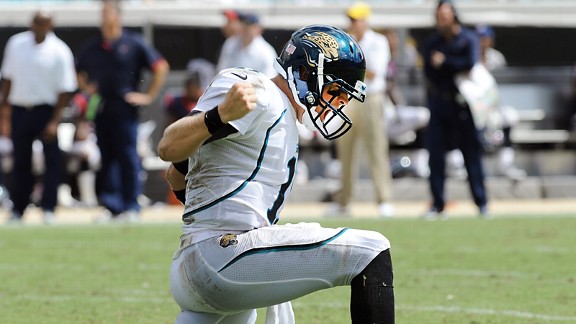 It’s early, and this list can change over the course of the next few months, but for right now I can’t think of anyone in the entire NFL who inspires less confidence than Gabbert. Anyone else on this list, you could talk yourself into a scenario in which he’s not terrible this year. But not Gabbert in Jacksonville. No way. Blaine Gabbert is Bad Quarterback King.

At least until Sunday, and then who knows?