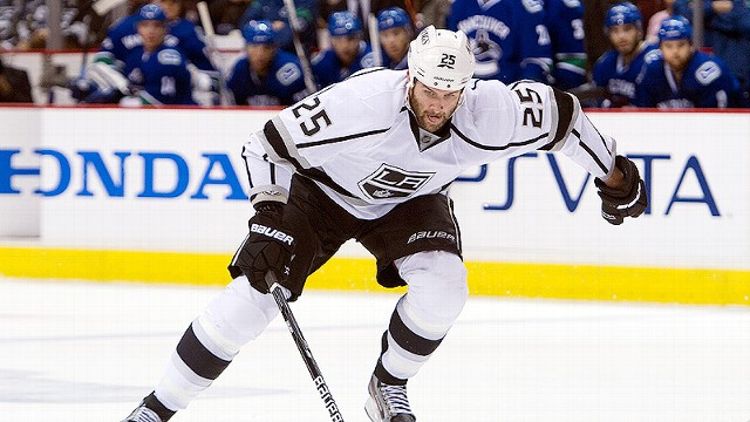 I started bringing my daughter to Kings games last November, after I bought season tickets behind one of their goals for the season. She knew nothing about hockey, started learning on the fly, and ended up liking the sport about 100 times more than I ever expected. One of her first questions: “Why are the fans so mad at Penner?”

My answer was simple: Kings fans believed Penner made too much money and didn’t try hard enough. In the Salary Cap Era, you can’t pay a hockey player $4.25 million for piddling results. My daughter never accepted that, nor did she understand it. She thought Penner was trying. She thought the fans were being too mean. She didn’t care how much money he made. Anytime someone derisively screamed that Penner sucked, she’d whirl around with a wounded look on her face. She didn’t understand the concept of “motivating someone by being relentlessly mean to them.”

Meanwhile, the Kings changed coaches, yanked Penner’s playing time around, shopped him at the trade deadline, even sent him home for “conditioning” reasons. None of it worked. Penner was mired in the slump of slumps. In his first 90 games with the Kings, he only scored ten times. His goals happened so infrequently that one of the diehards in our row — Julia, who’s famous in Section 115 for pouncing on any puck that somehow squeezes through the net and falls toward the fans — sarcastically promised to wear a Penner jersey if he scored in a certain game. Of course, he did. Suddenly she was wearing Penner’s jersey as people gawked at her in disbelief. A Penner jersey? Was this supposed to be ironic?

Keep in mind, our section included one fan who screamed “COME ON, PENNER!” during just about every Penner shift for the entire Kings season. His pronunciation of “Penner” always oozed with sarcasm. Come on, Penner. Eventually, he started yelling those three words at other Kings who screwed up. Penner had evolved into the perfect whipping boy for a hockey crowd — overpaid and undermotivated (or so it seemed), stuck with an unflattering nickname (“Pancakes,” which Penner earned after injuring his back while sitting down to eat a stack of pancakes), just a 6-foot-4 sniper who didn’t snipe and had (seemingly) wasted his considerable potential.

I probably attended 22 Kings games during the regular season. At no point did I ever imagine them making the Stanley Cup finals … and believe me, at no point did I ever imagine that the words “Dustin Penner” and “playoff hero” would appear in the same sentence (even if it had already happened before, with the 2007 Ducks). It’s not like Penner cruised into the postseason with a head of steam: In a two-month stretch from February 9 through April 7, Penner scored just twice in 23 games. Then the playoffs started and “COME ON, PENNER!” slowly morphed into “COME ON, PENNER!” He started finishing his checks and flying around on the suddenly dangerous Richards-Carter-Penner line, notching 10 points in 15 games and even scoring the game-winner to propel the Kings into their second finals ever. Penner had shaken out of his slump. And then some.

That last goal happened in overtime, well after my daughter had already gone to sleep. She found out the details the following morning, and her eyes widened when she heard who scored the series winner.

“You think the guy behind us will stop being mean to him?”

And that’s when I came to this realization: “I need to do a podcast with Penner.” We taped it on Friday afternoon in our B.S. Report studio, just a few hours before the Devils advanced to the finals. We talked about Penner’s topsy-turvy season, the near-fight in the Coyotes-Kings handshake line, the rules of fighting in general, the story behind his missing tooth, what happened to the Kings these past seven weeks, and even whether he could hear Kings fans killing him during regular-season games. (The short answer: Yes.) I thoroughly enjoyed this one. Remind me to have more hockey players on the B.S. Report.

Why You Couldn't Find the Bute-Froch Fight