Are the Detroit Lions Who We Thought They Were? 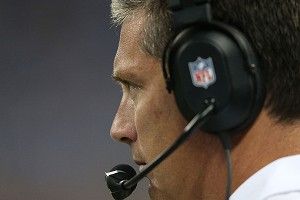 Earlier this week, Pro Football Weekly ran a fairly rabble-rousing story in which a “rival GM” made his thoughts known about the surprising start for the 1-3 Lions. And those thoughts are that it’s not all that surprising. (My money in the “rival GM” pool is on the Packers’ Ted Thompson. He’s always had a tendency to run his mouth.) The crux of the comments was that despite their trip to the playoffs last year, Detroit wasn’t the rising contender that so many had made them out to be. The question is whether the three main criticisms hold any weight.

1. Detroit is one-dimensional on offense.

They are a one-dimensional offensive team that if the quarterback (Matthew Stafford) is not on, people are figuring it out. If you take (WR Calvin) Johnson out of the game (one TD through four games, compared to eight TDs at the same stage last season), who else do they have that can beat you?

Considering the entirety of the Matthew Stafford era in Detroit, this is a hard point to refute. Since 2004, the Lions have spent four picks in rounds 1-3 on running backs, and as of now, none of them have yielded any returns. The Kevins, Jones and Smith, were plagued by injuries from the start, and it seems like Jahvid Best’s concussion issues may have him on the same path. Even when healthy, though, Best was never an every-down solution. That would be 2011 second-round pick Mikel Leshoure, who’s started just two games in two seasons after tearing his Achilles tendon as a rookie and missing the first two weeks of 2012 due to a drug-related suspension. Leshoure was considered a first-round talent coming out of Illinois, and the next 12 games will go a long way in figuring out whether he can solve Detroit’s running woes.

The problem is that even if Leshoure proves to be an NFL-caliber back, he’ll be working behind an offensive line that’s alternatively aging and underwhelming. The guards, Rob Sims and Stephen Peterman, have been solid but unspectacular. The mainstays, center Dominic Raiola and left tackle Jeff Backus, are 33 and 35, respectively. Detroit drafted Iowa tackle Riley Reiff in the first round this year, presumably as a replacement for Backus, but early on the thought was that Reiff may supplant right tackle and 2008 first-round pick Gosder Cherilus, who always seems one mistake away from finding the bench. Leshoure may be every bit the downhill runner he was with the Illini, but without a plan to improve/replace who’s in front of him, it might not matter.

2. The Lions defensive line is overhyped.

Suh belongs on the All-Hype team. (DE Cliff) Avril is not that good — put on any game and you can watch him get blocked time and time again. Corey Willliams is solid, but nothing that wows you or makes you wonder how you are going to block him. The other guy (DE Kyle Vanden Bosch) is a try-hard guy getting up in years that does not really threaten you. For as much as people talk about that D-line and all its depth, where are all the players?

Since Jim Schwartz came to Detroit, the Lions seemed to be on the New York Giants plan of taking a strength and making it stronger. Kyle Vanden Bosch joined Schwartz in the move from Tennessee, and the Lions selected Ndamukong Suh second overall in 2010 with the hope that defensive-line play could become a team signature. The moves, along with selecting Auburn star Nick Fairley in the first round in 2011, earned Detroit a reputation for dominant play up front, and the contention is whether that’s deserved.

Last season, Suh’s personal-fouling antics almost guaranteed that the attention paid to him would outweigh his productivity, but even in a down sophomore campaign, he was still a player offenses had to account for. The criticism that may be fair is of Detroit’s lauded duo at defensive end. Cliff Avril collected 11 sacks in 2011 and was looking for a big contract this offseason as a result, but his demands didn’t seem to fit the production. Last season was the first year in which Avril tallied more than double-digit sacks, and according to Football Outsiders, the 26-year-old finished out of the top 20 in quarterback hits and knockdowns and was just 14th in total hurries. Vanden Bosch, a stalwart of Schwartz-led defenses since he was in Tennessee, is 33 and no longer the impact player he once was. Amid his legal issues, Fairley has been unable to usurp veteran Corey Williams alongside Suh at defensive tackle.

3. Jim Schwartz and GM Martin Mayhew are both overrated.

They’re both overrated, the GM said. What has he (Mayhew) really accomplished?

It wasn’t going to take much for Mayhew to be celebrated as a hero in Detroit. The Matt Millen era was an unmitigated disaster for the Lions. As of 2010, three of Millen’s first-round picks remained on the roster, and the list of busts — Joey Harrington, Charles Rogers, Roy Williams, Kevin Jones, Mike Williams, and Ernie Sims — is hard to believe. With Detroit’s 0-16 finish and Millen’s subsequent dismissal in 2008, Mayhew was awarded the no. 1 overall pick in his first draft. The haul in 2009 is hard to take issue with at this point. Mayhew’s first four picks — Stafford, Brandon Pettigrew, Louis Delmas, and DeAndre Levy — are all starters, and Stafford and Delmas were centerpieces of Detroit’s short-lived resurgence.

After taking Suh and Best in 2010, it’s the 2011 draft where Mayhew looks to have faltered. Fairley, Leshoure, and their affections for marijuana have been at the front of Detroit’s charge to be this decade’s version of the 2006 Bengals. Fairley’s compounded his off-field issues with a lack of production, and Leshoure has compounded his with injury. Still, in just his fourth year, we need a bit more time to judge any of Mayhew’s drafts, let alone this year or the year before.

The doubts that seem legitimate are about Schwartz’s status as a top-tier head coach. Detroit’s quest to be a team defined by toughness has caused a stumble into a lack of discipline. Only the Raiders gave up more yards in penalties in 2011 than Detroit, and the lack of attention to detail looks to have spilled over into this season, where the Lions have given up four special-teams touchdowns in just four games.

Schwartz’s reputation when he got to Detroit was as an excellent defensive coach who assembled quality units in Tennessee more on the basis of structure than superior personnel or scheme. The lack of upper-echelon talent is still a problem at places among Detroit’s defense. The linebacking corps is a solid group, but the problems in the back half have been steady for the past several years and were only magnified with Delmas missing time at the beginning of this season. Part of that improvement will be in Mayhew assembling young pieces in the secondary, but the other will be in that defensive line living up to whatever Schwartz had hoped it would when he arrived.