Anatomy of an Upset: Michigan’s Run to the Final Four 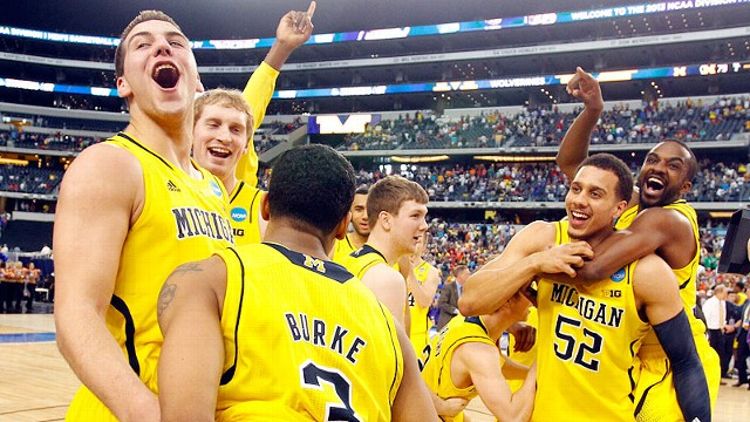 At this time of year, the fervor of the college-versus-the-NBA debate typically reaches its peak. The professional game may lack a certain emotional draw, but there is no denying that the quality of strategy at basketball’s highest level is substantially better. In a very basic sense, Division I basketball boils down to the search for space. The NBA has typically held a monopoly on the art of spacing the floor, thanks to not only the influence of advanced stats but also the influx of spread pick-and-roll concepts from Europe. In the college game, methods for finding and exploiting this space are not nearly as widespread.

For a number of reasons — younger, less-skilled players; a more compact area inside the arc; fewer rules benefiting offensive players such as defensive three seconds — college basketball has a lot of trouble reproducing the refined play of the NBA. The teams that can pull this off are difficult to beat, especially if their style of play is carried out by players with NBA-level talent. Since inserting Mitch McGary into the starting lineup at the beginning of the NCAA tournament, the Michigan Wolverines have become one of those teams.

The 20-year-old freshman’s presence has allowed head coach John Beilein to (somewhat slowly) identify that his team can be an unstoppable force when it spreads the floor with dead-eye shooters like Tim Hardaway Jr. and Nik Stauskas and runs pick-and-rolls featuring McGary and another NBA-caliber talent, guard Trey Burke. Even though freshman forward Glenn Robinson III isn’t nearly as menacing a threat from beyond the arc as Hardaway or Stauskas — he’s shooting just 33.3 percent on the season — the Wolverines still have the perfect personnel to maximize space on the offensive end of the floor.

Anatomy of an Upset

McGary’s skill set is what ties it all together. He is similar to the NBA’s Marcin Gortat, a productive pick-and-roll center. Both players can screen and finish below the rim — with both hands — off the roll and on the move. The two even use similar unorthodox half-flip, half-hook shots from 4 to 7 feet out. McGary may be a freshman, but his polished pick-and-roll game is quite advanced for someone so young. In his team’s thrilling upset of 1-seed Kansas, McGary showcased all of these skills.

Passing off the roll:

Catching and finishing on the move:

Weak-hand finishing off the roll:

McGary’s screening was also the reason that Burke found enough space to unleash his late barrage of 3s, which helped the Wolverines tie the game in regulation and eventually take down the Jayhawks in overtime.

McGary was certainly a force against Kansas, but he wouldn’t have been able to rack up such gaudy numbers without Burke’s ability to pass and score out of pick-and-rolls. The sophomore guard has begun to show a nuanced approach to the pace needed to run this action at a high level. Notice his ability to control his dribble and speed after coming off the lane in these assists to his bruising ball-screen partner.

Most college players don’t show the acumen to both pass and score out of such a complex action. Burke has demonstrated these abilities at a high level (that said, he still has a way to go when it comes to the pro level). By consistently finding McGary on his dives to the rim, Burke presented the Kansas defense, and eventually Florida’s, with some difficult choices — either help off a shooter like Hardaway or Stauskas, who were filling up the wing behind the roll, or let McGary get in position for an easy catch-and-finish. When the Jayhawks chose to take away McGary, Burke made them pay by finding one of his shooters.

Thanks to its spread offense, Michigan was able to generate points quickly at the end of its win against Kansas. When it was all said and done, the Wolverines had hung 87 points on one of the best defenses in the country in advancing to the Elite Eight.

With their offense humming, the Wolverines jumped on the Gators early with more of the same spread pick-and-roll magic:

After watching his team fall into a 13-0 hole early, Billy Donovan, panicking and scrambling for an answer, went to a matchup zone in a failed attempt to slow down his opponent. Stauskas and Hardaway each made 3s from opposite corners on simple drive-and-kick gap attacks stemming from, as you can probably guess by now, ball movement out of pick-and-rolls between Burke and McGary. From there, Stauskas went white-hot from behind the arc, helping build a 24-point lead shortly before halftime that allowed Michigan to cruise into its first Final Four appearance in nearly two decades.