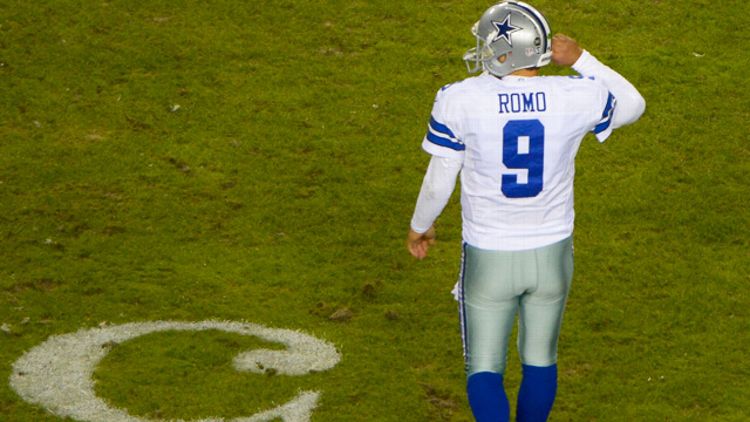 There’s one enormous misconception that keeps cropping up this NFL offseason in the reaction to surprising personnel decisions. In terms of evaluating how much a particular player is worth (to his team or another), one little tidbit matters more than anything else: Past performance, future performance, personality, and name value all fall by the wayside to this most essential bargaining chip. It explains both the Tony Romo deal from this past weekend and Carson Palmer’s desperate attempt to flee the East Bay. In the NFL, leverage is everything.

Consider Dallas’s predicament with regard to its occasionally brilliant, frequently embattled quarterback this offseason. With a team of expensive veterans surrounded by a relative paucity of players on cheap, team-friendly rookie contracts, the Cowboys normally would be up against the salary cap. It didn’t help when the Cowboys failed to come to terms with Anthony Spencer on a long-term deal and were forced to franchise him for the second consecutive year. Throw in the cap penalty they’re eating after the NFL took away $10 million over two years for their handiwork during the uncapped year, and the Cowboys were really struggling to create space under the cap. Cap figures aren’t released publicly, but by some accounts, the Cowboys couldn’t have fit a Crown Victoria into their cap space this offseason, let alone Victor Butler.

Dallas’s only way to create significant cap space this offseason without gutting its roster was by renegotiating the contract of a veteran who had a high base salary into a new long-term deal with a low base salary (at least in 2013) and a large signing bonus, which would spread the cap hit over a number of years. The only player on the roster who really qualified under those terms was Romo, who had a $11.5 million salary and a $16.8 million cap hit in the final year of his contract. Romo’s deal also dictated the Cowboys wouldn’t be allowed to franchise him after his contract expired, which eliminated whatever was left of the Cowboys’ leverage. Dallas couldn’t afford to have Romo play out the season without a contract extension; it would have had to shell out even more in 2014 to prevent him from hitting the open market. Simply, the Cowboys had to give Romo a new contract, and it had to happen as soon as possible.

Of course, the deal Romo and his agent extracted with all that leverage is enormous. It’s bigger than the deal Joe Flacco received after the Super Bowl, which isn’t unreasonable for a guy who has been better than Flacco during the past five years. The six-year, $108 million deal guarantees Romo $55 million if he’s on the Cowboys roster on the third day of the 2015 league year. Crucially, though, it creates some breathing room for the Cowboys against the cap. Romo’s base salary this year is a mere $1.5 million, and his cap hold is $11.8 million, which creates $5 million in cap room for the Cowboys to use as they see fit. They might also elect to turn Romo’s base salaries in 2014 ($13.5 million) and 2015 ($17 million) into bonuses, which would create additional cap space in those years as the team tries to lock up the likes of Sean Lee and DeMarco Murray.

Noted playoff win correspondent Donovan McNabb weighed in on this deal on Twitter, expressing his disapproving astonishment that a quarterback with one playoff win could get $55 million over six years before realizing that the $55 million merely represented the guaranteed value of the contract. The fact McNabb was appalled at Romo receiving what would have been a sub–Matt Cassel contract extension before realizing what the actual terms were should tell you how seriously you should take McNabb’s opinion on the matter.

Is Romo actually worth that enormous sum of money? Probably not. With this deal, the Cowboys are buying the post-peak years of a player who derives much of his value from his ability to scramble out of the pocket and improvise, a skill that should fade with age and/or disappear with an injury. Put it this way: The 49ers and Seahawks will derive tens (if not hundreds) of millions of dollars of excess value from the likes of Colin Kaepernick and Russell Wilson on their rookie deals by virtue of getting production that greatly outstrips their pay. There’s no way Romo can provide the Cowboys a cent of value that would exceed his compensation on this contract. The best he can do is live up to this deal, and to do that, he’ll need to win a Super Bowl. Dallas overpaid, but with no leverage, they had no choice.

Leverage was also at the heart of the Carson Palmer negotiations with the Raiders, which appear set to yield a trade to the one starting quarterback job left unfilled around the league. After the Raiders agreed to acquire Matt Flynn for two draft picks on Monday morning, the Cardinals are likely to acquire the deposed Palmer for a nominal bounty and insert him as their starting quarterback.

A trade was the best thing for both parties. The Raiders, in the middle of a massive, multiyear salary cull, had no use for Palmer. The decision to acquire him two years ago for a first- and second-round pick was incredibly shortsighted, but it’s the handiwork of a departed organizational mindset and a sunk cost. As much as rebuilding Raiders general manager Reggie McKenzie would love to go back in time and prevent that trade from ever happening, it went down. Getting rid of Palmer only cuts $6 million off of Oakland’s cap in 2013, but it allows the team to have a fresh start on its cap for 2014. That’s what McKenzie’s been building toward, and the Raiders could be massive players in free agency next year.

Palmer, meanwhile, had little leverage of his own to work with. The Raiders could have forced him to play this year, which would have obviously been unpalatable. They could have kept him on the roster until after the draft and then cut him, a move that might have dried up his market. As it was, the only real job left for Palmer was in Arizona, which had both a starting opportunity and the cap space to eat the $13 million base salary from Palmer’s deal for this upcoming season. Arizona still might require Palmer to renegotiate his deal, which must be the most unfriendly contract for an NFL quarterback.

Flynn, meanwhile, finally has a clear path to a starting job. Taking a flyer on Flynn — who has two years left on a modest three-year, $19.5 million contract — for a midround pick or two seems far more palatable for the Raiders than reaching for a quarterback with their third overall draft pick. Flynn’s profile doesn’t seem to jibe with the downfield receivers he’ll be playing with, but Denarius Moore and Jacoby Ford leave Flynn with a decent group of young wideouts to target. The Raiders likely will look for a tight end in the draft, but even if Flynn plays well, this is not going to be a very good team in 2013.

The best job for Palmer would have been in Buffalo, which had a wide-open quarterback competition and a defense capable of contending, but that spot disappeared when the Bills signed Kevin Kolb on Friday. Kolb agreed to a two-year, $13 million deal to replace Ryan Fitzpatrick and serve as the likely point man in Buffalo’s K-Gun attack.

It’s certainly possible there’s still some upside to be produced from Kolb after his two-year run in the desert with Arizona. Kolb’s biggest problem as a pro has always been his inability to handle the pass rush. When the rush gets in on him, Kolb takes false steps, loses track of his receivers, and either takes a sack or makes a dangerous throw. In Arizona, he was protected by what was likely the worst offensive line in football, especially at the tackle spots. Buffalo’s offensive line just lost its best player, guard Andy Levitre, but it’s a stronger unit overall than the one Kolb took four sacks per start behind last year.

Kolb’s other fatal flaw is his propensity for getting injured, something which that Cardinals offensive line certainly didn’t help with. Kolb has suffered an injury in each of the past four seasons, so it’s hard to imagine him staying healthy for a full 16 games with Buffalo. The team can help by giving him a reliable safety valve; C.J. Spiller will help, but the Bills could also sure use a tight end after Scott Chandler tore his ACL at the end of the 2012 campaign. Unfortunately for the Bills, the best guys left on the market are guys who share Kolb’s injury-prone nature, with the likes of Todd Heap, Kellen Winslow, and Dallas Clark still waiting for offers.

This game of second-tier quarterback musical chairs doesn’t bode well for the incoming class of college passers. The Bills, Cardinals, and Raiders were each heavily linked to quarterbacks with their first-round picks; now, it seems exceedingly unlikely that they would use a first-rounder on the likes of Matt Barkley, Ryan Nassib, or Geno Smith. At this point, the only landing spots for a quarterback in the first round seem to be with the Jaguars (second overall pick), Browns (sixth), and Jets (ninth), each of whom already have a young first-round pick under center and holes elsewhere on the roster. Barring a trade, it seems likely this will be the first opening round of the draft since 1996 without a quarterback coming off the board.