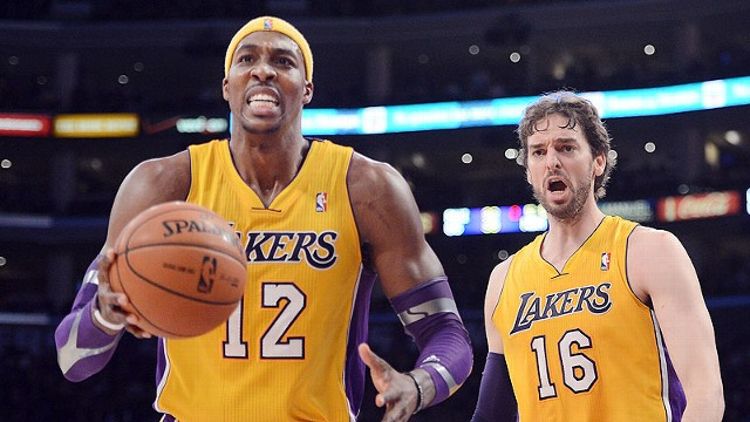 The word “indefinite” has become the go-to recovery-time descriptor for NBA teams understandably wary of providing a specific timeline, and it is a very scary word. But it can mean almost literally anything; fans went bonkers when the Kings slapped DeMarcus Cousins with an “indefinite” suspension last month, speculating it might last weeks, but management ended it after one game. (Keith Smart tacked on another game amid some internal controversy, but that’s a different story.)

There is no easy way to know until an MRI and other detailed testing are done how much time Dwight Howard will miss with a labrum tear in his right shoulder. (Pau Gasol will also miss at least two games after suffering a concussion Sunday night against Denver, but everyone seems hopeful at this point that he’ll clear the league’s concussion baseline test as soon as permitted. Jordan Hill will miss the Lakers’ two-game Texas swing this week with a hip injury.) Howard is confident he can get by without surgery, required in larger and more serious tears in the wrong places, according to a few trainers and some quick academic medical guides. Such surgery carries a lengthy recovery time; Nicolas Batum missed about three months of the 2009-10 season with a labrum tear, and Jameer Nelson missed about four months of the prior season, returning only at the start of the NBA Finals, with a version of the same injury. (Nelson hasn’t been the same player since, but a ton of other factors likely explain that regression.)

The Hornets’ Jason Smith did not need surgery for a shoulder labrum tear earlier this season; he missed only two weeks, but has since said he may undergo surgery after the season.

It’s safe to say the difference between a couple of weeks and three months could determine whether the Lakers even make the playoffs — a stunning reality for a team that expected to challenge Oklahoma City for the top spot in the Western Conference. The Lakers are 15-18 having played an average schedule for a Western Conference team, and with 18 of those first 33 games coming at home. They’ve only played six back-to-backs so far, and even so, Kobe Bryant has logged at least 40 minutes in 13 of the Lakers’ last 14 games. He’s been over 43 minutes in nine of those games, and this season is just starting to smell a bit like last season, when Mike Brown rode his stars into the ground in order to pile up regular-season wins. Bryant will have to do more with Howard out, though he won’t have to be the pick-and-roll focal point the way he was during Nash’s absence. The Lakers will probably use Bryant in the post more, and Gasol can get back to work down there if he gets some solo time in the pivot. That’s good for Pau’s efficiency, but it represents yet another role change in an endless pattern of coaches yanking him in one direction or another, and he and Bryant at this point in their careers both need others to lessen their respective burdens.

The Lakers, even with Howard out only a short time, are not guaranteed a playoff spot. It is not their birthright. It’s true the Lakers have a borderline top-five offense and the league’s eighth-best scoring differential — (plus-3.2 points per 100 possessions — normally hallmarks of a sure playoff team. It’s true that the Lakers’ relative underperformance in close games, a trend vulnerable to randomness, has their record in a worse place than the big-picture trends suggest it “should” be.

But those close losses, random or not, are done with and already reflected in the Lakers’ record. So are the blowout wins that helped fuel that positive scoring margin. The Lakers are a sub-.500 team, having played a ho-hum schedule, and they are getting worse. Their scoring margin over their last 15 games is a measly plus-0.5 points per 100 possessions, meaning they’ve played like a barely-over.-500 club during that stretch — the kind of club that usually misses the playoffs in the Western Conference and tries to find something useful with the 13th pick in the draft. The main culprit has been the defense, a problem under Mike Brown that has only gotten worse under D’Antoni. The Lakers are 19th in points allowed per possession for the season, and in their last 15 games they’ve surrendered 107.5 points per 100 possessions, according to NBA.com. That fatter number would rank 29th in the league, barely ahead of the Bobcats, who are playing a ton of small lineups and using a pack-the-paint style so aggressive it borders on experimental. That 15-game sample represents nearly half the Lakers’ season, and the one that includes more on-court time for Steve Nash. Is that sample more or less representative than the better sample, of similar size, that came before it? There’s no certain answer, but the team’s defense has been mostly bad in both.

The best thing the Lakers have going for them is the troubled state of things in Dallas, Minnesota, and Utah. The Mavs are a mess at 13-21, the same record as the Kings, and their defense has been even worse than that of the Lakers. Minnesota is dealing with so many injuries it feels as if they are on the border of a lost season. The Jazz are treading water at 17-18 after a road-heavy start, with a muddled rotation, a bad defense, and a point guard (Mo Williams) out at least a month with a thumb injury. The Blazers, the current no. 8 seed at 18-15, are probably a paper tiger, if a better one than most of us expected at the start of the season; they’ve played the easiest schedule among all Western Conference teams, and the bill has about come due for a team with absolutely no depth.

The Rockets’ better-than-expected play has counterbalanced some of these negative trends, and the Nuggets have done brilliantly to come out of a horrid early-season road show at 20-16. They’re about to fatten up on home games against easier teams, meaning that if the Rockets can maintain their current level of play, the no. 8 seed may be the only one truly available to a banged-up Lakers team. Imagine if they get healthy and sneak into that spot? Quite a reward for the top seed.

A healthy Howard represents the Lakers’ only real hope of constructing the above-average defense it will take just to qualify for the playoffs. Nash is below-average for his position. Kobe Bryant is still a disruptive rover, but his effort and attention to detail have waned this year, and the Lakers rarely ask him to put in heavy minutes against a threatening scorer. His transition defense has been inexcusable at times, and both he and Jodie Meeks, getting heavy minutes at shooting guard, have been prone to wait one fatal beat in shifting from offense to defense. Metta World Peace takes most of the perimeter stars, and he’s still pretty good at it, though he’s not the elite stopper he once was. Pau Gasol knows where to be and when to be there, but he has looked slow in dealing with stretch power forwards and in trying to contain pick-and-rolls. He and Howard are still in the early going of developing the big-to-big chemistry that is the foundation of most good defenses; even Sunday against Denver, multiple possessions ended with a Denver ball handler scoring an uncontested bucket as Howard and Gasol shrugged, pointed, and discussed who was supposed to rotate where.

Howard himself just hasn’t been anywhere near the level he was at his prime in Orlando, as I’ve illustrated before. He’s reaching with his arms more often instead of sliding with his base, and he hasn’t consistently been able to summon two or three hard cuts/jumps on the same possession. Ball handlers on the pick-and-roll have been able to manipulate Howard in ways we haven’t seen in years, throwing pocket passes by his swiping hands, crossing over into the middle of the floor instead of having Howard pin them on one side, and even just blowing by him on the way to the basket.

The Lakers just don’t have any other ready answers available. Earl Clark will help on defense as the other big guys recover from various injuries. But Clark can’t shoot, and though D’Antoni has given Hill more freedom to “space the floor” with his mid-range jumper — a shot on which he’s worked very hard — it’s just not a reliable NBA weapon. Hill’s a center, just as Gasol’s a center, and they’re both playing heavy minutes right next to another center in Howard. Nash’s creativity with the ball has mitigated some of that spacing crunch, but it’s still there against smart teams. Playing World Peace at power forward might help, but D’Antoni has gone away from that in recent games. Playing Jamison at center almost certainly won’t help, and Robert Sacre is unproven at this level as anything other than an entertaining bench cheerleader.

The Lakers have clearly been more organized since Nash’s return. Their top lineup — the four stars, plus World Peace — is scoring much more efficiently than Oklahoma City’s league-best offense and outscoring teams by nearly 10 points per 100 possessions, despite massive defensive issues. The looks for Bryant and World Peace are cleaner, and Nash’s presence has unlocked a ton of effective offensive sets on which this team can lean. They can replicate some of those sets without Howard, but they won’t be nearly as effective. They may not be able to replicate them while missing both big men, since Gasol passing from the elbows is such a crucial element.

But the defense is still bad, and that’s enough to bring this lineup to break-even levels on the wrong nights. The bench is among the league’s worst, and lineups featuring a mix of backups and starters have been all over the place.

The Lakers will be much thinner now for a while. That might be enough to kill their playoff chances. And even if they sneak in, making a title run from no. 7 or no. 8 will be extraordinarily difficult.

About Last Night: No Fight in These Irish