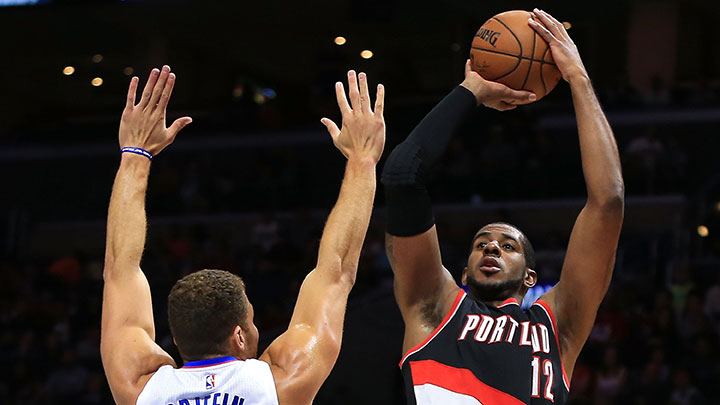 Despite the sport’s inherent simplicity — you shoot, you dribble, you pass, you rebound, and you defend — there’s an endless collection of ways to accomplish basketball’s most basic tasks. No pump fake, no fadeaway, no crossover is the same — each one dictated by in-game circumstances and, more importantly, the quirks and characteristics of individual players. We’ve already covered some of the game’s most recognizable creations in Volume 1 — Dirk’s one-legged fadeaway, Duncan’s left-block bank shot — but here are 10 more of our favorites.

Much of a signature move’s uniqueness is derived from the era in which it exists. In the age of efficiency, LaMarcus’s turnaround midrange jumper is the shot that the best modern NBA defenses are designed to give up. Yet there’s LaMarcus, plugging away, like the last sheriff of a dystopian wasteland, converting the solid waste of the “worst shot in basketball” into an infinitely renewable energy source. Aldridge takes 60 percent of his shots between 10 feet from the basket to the 3-point line, and a further 60 percent of those shots occur between 16 feet and the 3-point line, mostly from the left block and out. Last spring, LaMarcus became an instrument of karmic irony when he filleted, seasoned, and roasted the midrange-eschewing Houston Rockets —  89 points, 35-of-59 from the floor over the first two games of their first-round series — with an array of jumpers, hooks, drop steps, up-and-unders, and that wonderful step-back turnaround.

Al barely bends his knees and just kind of ponderously raises his arms as if to shoot. It’s preposterous, and it shouldn’t work. Big Al isn’t quick, has no vertical leap to speak of, and is a career 37 percent shooter from farther than 10 feet. Don’t jump on his pump fake! But much like Wade’s ability to trick defenders into forgetting that he doesn’t shoot 3s — or, mixing sports metaphors, Thomas Müller’s ability to seemingly become invisible until he mysteriously reappears in front of goal — consistently causing defenders to make mistakes is an actual, if intangible, skill. It’s almost like the slowness of the fake — and the defender’s knowledge that Al has a panoply of other moves at the ready — is what makes it work. Go too quick and the deception shows through; go too slow and Al risks turning it over. But hit that medium-slow speed and even good defenders can’t help but think, Wait, I got this one, only for Al to then go ghost like Swayze.

Ahead of the 2008 NBA draft, the popular take on Kevin Love coming out of UCLA was that he had a high basketball IQ, sound fundamentals, and a winner’s mentality to go along with sub-NBA athleticism and a warming layer of baby fat. All caucasity code words for your run-of-the-mill white dude who’s here probably only because he’s so damn tall. What everyone — even critics who didn’t think Love’s game would translate to the faster, higher, stronger big leagues — agreed upon, however, was that he threw amazing, cartoonishly well-weighted outlet passes that landed softly in the hands of leaking-out teammates as if delivered by a gentle stork. The question then became, “How useful of an elite skill can that even be?” As it turns out, Love is quite a good basketball player (Cleveland turbulence notwithstanding) and his still-amazing, still-pinpoint outlet passing is just one tool, albeit the coolest tool, in a varied offensive kit. Plus, the original question of usefulness was a fair one. Unlike the rest of Love’s toolbox — the consistent jumper and sticky-handed rebounding ability — the outlet requires teammates with a simpatico set of talents to bring out its full awe-inspiring potential. The form on Love’s outlet is interesting, too — falling somewhere between a chest pass and set shot, with the left hand acting as a guide while the right unfurls into a spring-loaded wrist-snapping gooseneck. “I played with my brother three grades up when I first started organized basketball and I couldn’t quite get the ball 10 feet,” Love told Steve McPherson last season, “so I actually had to shoot like that.” Let’s hope that we see Love launching more touchdowns to LeBron as the season goes on.

One of the joys of watching the Spurs at their best is seeing the way each player’s talents blend with the others. Duncan is the security blanket, Manu is the chaos bringer, and Kawhi is the defensive devastator. Tony Parker is the catalyst, knifing into the beating heart of enemy defenses, ready to pitch it out to waiting shooters or take it to the hoop himself. In today’s NBA, if you’re a perimeter player who can’t shoot 3s, you better be a wicked threat to drive the ball to a spot where you can score. Luckily, Parker, with his mercury quickness, has myriad ways to get within range for a pull-up jumper, a feather-soft off-the-dribble push-shot teardrop, and one of the best — if not the best — spin moves in the game. My favorite iteration of Parker’s spin comes in transition. When Tony receives the ball at around half court and slows down to survey the scene, he lulls his defender into a moment of relaxation, at which point Parker accelerates right at his man, making his defender look he were practicing ballroom dancing with a poltergeist.

I’ve already written too much about late-career Kobe Bryant. Every shot is a manifesto, every possession a curse through clenched teeth at the dying of the light. Every Lakers game this season is a senseless battle for a forgotten hill in the last days of a bygone war. Late-career Kobe’s fadeaway jumper is, of course, reminiscent of Michael Jordan’s post-gamb— excuse me, post-baseball sabbatical turnaround fadeaway, the move that MJ used to stretch out his career peak by turning himself into the most athletic jump shooter ever. Did Kobe “copy” Jordan? Sure, but copying the best player to ever play your position is actually a great idea. So far this season, per NBA.com, no player has taken more shots between 10 and 19 feet.

Let us peer into the future of the NBA, where the heretofore unheard-of length and athleticism of the Greek Freak is capable of folding space-time into a hallucinogenic origami of dropped jaws. Some will tell you that this play is a travel, that human beings cannot Eurostep from outside of the 3-point line to the rim. They will tell you that according to the exact letter of the rulebook, Giannis’s first step is not technically a gather step, and is, indeed, the first of three steps. Your only rational response: slap the rulebook out of said person’s hands and walk away in a flutter of papers.

It’s hard to remember a time before Andre Miller was old. He was famously booed as a 23-year-old rookie during All-Star weekend back in 2000 because he laid the ball up on a breakaway instead of dunking it. My favorite Old Man Miller fact is that he led the league in assists (10.9 per game) with the 2001-02 Cavaliers, a team that won 29 games with a roster containing immortal names such as Ricky Davis, Bimbo Coles, Lamond Murray, Michael Doleac, and Wesley Person. My second-favorite Old Man Miller fact is that he ties his sneakers by wrapping the laces around his ankles and leaves two inches of sock flapping off the front of his foot. “I just tie ’em around my ankles in a knot,” Miller told the Washington Post. “A knot in the front, and a knot around the ankles.” Andre Miller’s game is the physical manifestation of a tin-foil-wrapped coat hanger attached to a pair of television rabbit ears. It is fitting, then, that Miller’s signature move is basically him just being an old-ass man hooping in the driveway of life.

Screw Paul Pierce. As a Knicks fan, the only thing I could be sure of over the last six or seven years was that Paul Pierce would cut out my team’s heart right on the Madison Square Garden floor and then liberally coat the interior of the wound with salt. Pierce’s chosen instrument for those final moments — beyond his personalized set of brass balls — is an in-and-out dribble on top of some carefully crafted footwork, followed by a little fade to the right and the ball crashing through the net like the cold, soul-crushing light of Monday morning. Then he does a little bow or airplanes around the court. Screw Paul Pierce.

Mike Conley and Isaiah Thomas represent two totally different ways to do, essentially, the same kind of change-of-speed move. Conley usually employs a crossover in the general area of a looming ball screener. The defender then has to process a bunch of things at once — which way Conley is leaning, where the screen is coming from, how he’s supposed to defend this situation — and once Conley senses that split-second hesitation, he uses his footwork and throws on the jets. Isaiah Thomas’s version, on the other hand, is just flat-out hypnosis. Thomas drives on his defender, then doubles back like someone who forgot his wallet on the bedroom dresser. He does everything but pat his pockets and look confused before spinning back past his man and toward the rim.

Chandler really has two moves, but both are incredibly simple and devastatingly effective. The first is the tap-out, in which Chander uses his length and timing to push rebounds to waiting teammates, extending valuable possessions. With the other, he reads the defense and just attacks the rim with the force of a thousand suns or someone finally set free from the snake pit that is Madison Square Garden, suddenly allowed to roam free in the acres of floor space created by the Mavericks’ Dirk-powered offense. Tyson currently leads the league in dunks, with 56, and is averaging 11 points on a stupefying .711 true shooting percentage, in addition to a body language that screams, “I’M GLAD I’M NOT IN NEW YORK.”

We Went There: Wisconsin-Duke at the Kohl Center