We Went There: Wisconsin-Duke at the Kohl Center 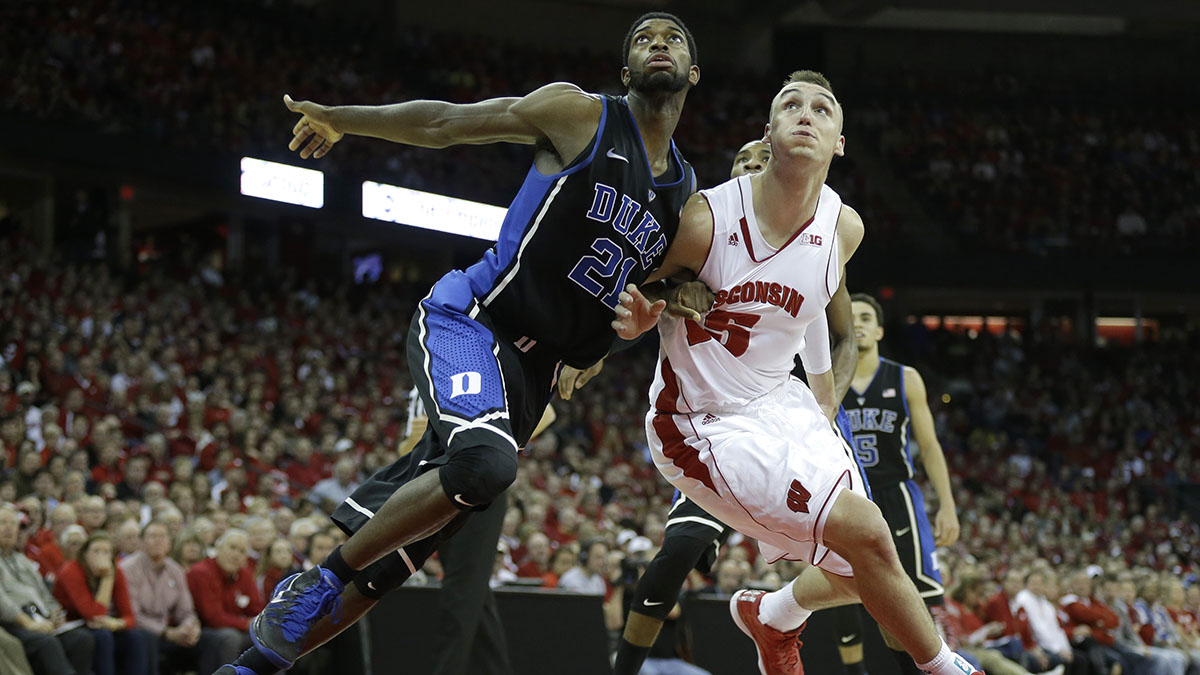 The most anticipated game of the college basketball season was played in Madison, Wisconsin, on Wednesday night. I was there for it. Here’s what I saw.

1. The Grateful Red brought their A-game.

And look, if you aren’t crossing lines as a student section, you aren’t trying hard enough. Making uptight middle-aged people cringe is part of college life. Some of the chants missed their mark, but the “ass-hole” chants directed at obnoxious Duke fans were beautifully orchestrated. The “stand up, old people” chant toward the end of the game was phenomenal. And best of all, Wisconsin students did their homework. When Tyus Jones went to the free throw line in the second half, the Grateful Red started chanting what sounded like “Melissa.” I have no idea who Melissa is or what she means to Jones, but I do know that Jones was 1-for-3 on foul shots while Wisconsin students chanted her name. When they didn’t chant her name, Jones went 5-5 from the line. In retrospect, they probably should’ve chanted that the entire game.

I’ve never seen a freshman center in college basketball with such a polished offensive game. The terrifying thing is that he looks better every time I see him play. Frank Kaminsky never had a chance guarding him one-on-one.

3. Tyus Jones is the Mike Conley to Okafor’s Greg Oden.

Remember how even though Conley was a highly recruited point guard in high school, he was mostly known as Oden’s sidekick when they arrived at Ohio State? And then remember how Conley went nuts in the NCAA tournament his freshman year? He went from a guy who was definitely coming back to school to the fourth pick in the 2007 NBA draft in a matter of weeks. Like Conley, Jones was the AAU teammate and part of a package recruiting deal with a center who was the most sought-after player in the country. And like Conley, Jones has emerged from his big man’s shadow.

In my column this week, I wrote that if you were trying to create the most difficult conditions for Jones’s first career road game, they would look like what he encountered in Madison. And yet Jones dominated Wednesday’s game. He was the best player on a floor he shared with several future NBA players, and never looked flustered. Given the circumstances, Jones’s game against Wisconsin was the most impressive individual performance of the season so far.

Few guys in college basketball can get their fan bases to go from “Why can’t you ever be ready to play?” to “That’s more like it” to “How long until Bronson Koenig starts?” to “OHMYGOD TRAEVON IS ABOUT TO WIN THE GAME FOR US” to “Aaaannnd there he is trying to do too much again” as quickly as Jackson can. There was a moment toward the end of the game when he went into hero mode, during which I forgot about the Traevon Jackson roller coaster and felt certain that he was about to single-handedly win the game for the Buzzcuts. But alas, the basketball gods decided that Jackson carrying Wisconsin to a win over Duke two hours after Mike Gesell led Iowa to a win at North Carolina would be too much insanity for one night.

5. Coach K is brilliant, but you knew that already.

It seems counterintuitive to switch all screens against Wisconsin, since the Buzzcuts thrive off of mismatches. All five Wisconsin starters can post up and shoot 3s. Given that, switching screens seems like it would play into the Buzzcuts’ hands, since they should eventually be able to get the ball to a player who can score on his overmatched defender.

But when Duke switched all screens, Wisconsin became so committed to trying to exploit mismatches that it stopped running its offense and started going one-on-one. I’ve written that the more Wisconsin strays from old-school Bo Ryan principles, the worse the team is. Coach K knew this, too, which is why he baited the Buzzcuts into mismatches and tempted them to score in isolation. It was a ballsy move because K had to count on his players to commit to the switching scheme and hold their own defensively across different matchups. Well, Duke rose to the challenge, Wisconsin’s offense stalled, and the Blue Devils’ potent offense took care of business on the other end.

6. Marshall Plumlee was an unsung hero.

Seriously. Make fun of his parted hair all you want. Plumlee was great in his eight minutes. He scored four points and grabbed three boards while missing only one shot. Plumlee had no turnovers, and he fouled only to prevent Frank Kaminsky layups (which saved Duke a point when Kaminsky missed one of his free throws). Most impressively, Plumlee had to defend Wisconsin guards on the perimeter on multiple possessions, and he didn’t just trip over his feet and tackle the ball handler. For all the cheap jokes I’ve made (and will continue to make) at his expense, it’s only fair that I acknowledge that Plumlee was perfect in his role last night.

7. Wisconsin will be fine.

Two things that Buzzcuts fans need to keep in mind: (1) Sam Dekker is at least Wisconsin’s second-best player, and he isn’t close to 100 percent right now. His ankle will heal, Nigel Hayes will hopefully stop fouling, Josh Gasser will get back to knocking down 3s, and the Buzzcuts will be noticeably better by March. (2) Duke is reeeeeeeaaaallllllllllllyyyyyyyy good. At the end of the day, McDonald’s All Americans are more talented than Culver’s All Americans. There’s no shame in losing to a team as stacked as Duke.

Do you realize what the Blue Devils just did? Only three programs in America have a better home winning percentage over the last 14 years than Wisconsin. Yet Duke went into the Kohl Center with a bunch of freshmen, got virtually nothing from future lottery pick Justise Winslow, its All-American big man Okafor dealt with foul trouble all night, Wisconsin’s Traevon Jackson scored his career high, and Duke still beat the second-ranked team in the nation by double digits. I don’t want to come across as the kind of fellow who overreacts to early-season games, but it’s obvious that Duke and Kentucky are going to go 39-0 before playing each other in the national championship. Why are we even wasting our time with the rest of the season?

Make It or Break It: The NFL Players Who Have Everything to Prove in December