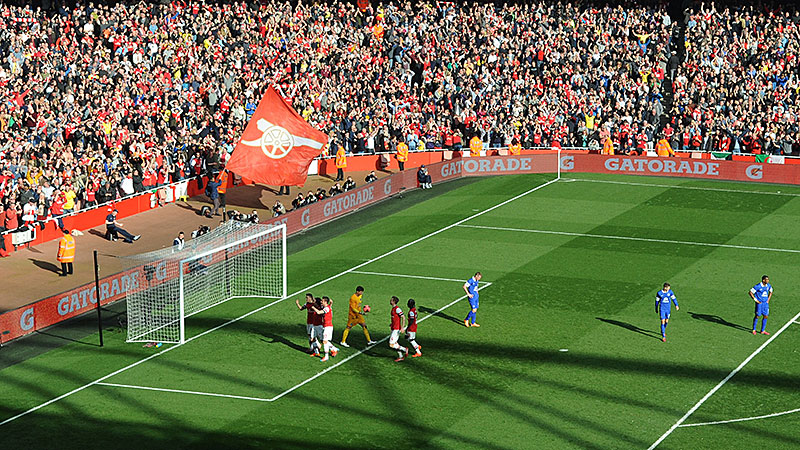 Brett Koremenos: I am an Everton fan; you are an Arsenal fan. About a year ago, we discussed our clubs’ futures before one of the most important matches they’ve played in recent memory, and this weekend the two teams squared off in the FA Cup quarterfinals. My Toffees have seen their long-shot Champions League hopes go up in smoke after being eviscerated by Liverpool a few weeks ago and are now playing for another top-eight finish (as in years past). Your Gunners are on their way out of the Champions League, while losing ground in the Premier League title race. It seems like supporters like yourself are getting restless. Winning a cup would be a nice boost for either of our respective fan bases.

In the end, Saturday was just another example of me regretting getting up before 7 a.m. to watch Everton in a crucial match. It’s doubly depressing, watching Everton get worked by a bigger club, bleary-eyed and cursing the difference in time zones. The final score line wasn’t completely reflective of the quality of the game, but it’s still deflating coming to grips with how this is going to be another hollow season. Emotional investment in a soccer club is the worst.

I’m sure you weren’t flipping over cars and waving Arsenal flags while singing “One Nil to the Arsenal” at the top of your lungs in the streets of New York, but I’m guessing you’re in a lot better place than I am right now? I mean, even without factoring in the victory, a massive event occurred: Mesut Ozil scored a goal!

Arsenal needed this. They are seven points in Chelsea’s rearview after topping the table for most of the season, in a post-Ozil/Aaron Ramsey, Welsh-hero fever dream. Midfield pug dynamo, the hope of England, and occasional cigarette smoker Jack Wilshire fractured his foto during a friendly with Denmark. Arsenal’s strike force has consisted of the not pacey but skillful and overworked Olivier Giroud; the mystery wrapped in an enigma pulled back in a ponytail that is perpetual want-away Nicklas Bendtner; and the sushi-raw Yaya Sanogo. Arsene Wenger pried open his musty wallet for the January transfer window and added much-needed reinforcements in the form of on-loan 31-year-old midfielder Kim Kallstrom, who has yet to play because of a cracked vertebra. Oh, and the team is entering the ninth year of a trophy drought.

So, yes, I’m in as good a place as you can be as an Arsenal fan. Still alive in the FA Cup and facing Wigan (fist-pump, shout-out to Demichelis) instead of Manchester City in the semifinal. Still within at least the faint imaginings of striking distance of Chelsea.

Sorry it had to be at your expense.

Koremenos: It was certainly not an enjoyable experience. I’ve been pretty much numb to Everton’s season since the Liverpool match crushed my spirit. Even when John Terry scored a late winner the other week, I barely reacted. Well, outside of how most people do when the face of pure evil flashes across their television screen. The little things in Saturday’s match — James McCarthy slipping and creating a mini break, Gareth Barry kicking shins in the 18-yard-box, Giroud scoring — just seemed like a buildup to the inevitable disappointment.

Everton might be the little engine that could, but even with a new conductor, the club is still stuck on the tracks. Winning the FA Cup would have been validation that Roberto Martinez’s new style is actually moving things forward. At some point in my fandom, I’d like to experience the joy of actually accomplishing a tangible feat rather than rooting for ultimately inconsequential victories. (Hooray for finishing ahead of Liverpool two times!)

I honestly don’t even like this competition that much, though I would have probably have lost my mind had Everton pulled this off. How much does this win mean to Arsenal fans? Thanks to Wigan’s continued mastery of City (that was really weird to write), your club is in a great position to reach the final. But does it really lessen the disappointment of another empty Champions League run and possible failure to clinch the league title after running over the league to start the season?

netw3rk: “Giroud scoring”? How dare you. Eighteen goals in all competitions, 12 in the Premier League. Has he looked a bit worn down from being, essentially, the club’s lone striker option for much of the season? Sure. But I think the Frenchman gets a bad rap simply because he’s following in the steps of Robin van Persie, Thierry Henry, and, to a lesser and more annoying extent, Emmanuel Adebayor. He lacks the Dutchman’s left foot of God, the game-changing creativity and athleticism of Henry, and the pace of all of three, but his holdup play is stout, his link play shows an intelligence that belies his size, and he absolutely can score goals. He can’t manufacture those goals out of thin air like previous Arsenal strikers could, but he gets it done.

Thank you, by the way, for bringing up the Champions League. First of all, it’s a tad presumptive to assume Arsenal are finished simply because they’re down two away goals to the best side in Europe, going into the second leg in Germany. I mean, they’re probably finished, but the fork is not yet, technically speaking, actually sticking out of their backs.

Secondly, yes, Mourinho’s Chelsea have the look of a team that might not lose another game this season. But in 2011-12, Manchester United had an eight-point lead over Manchester City, at the beginning of April. A little more than a month later, Manchester got a powder-blue paint job as City lifted the trophy in dramatic style. Seven points back of Chelsea is daunting, sure, but it ain’t over yet.

Now, speaking of Martinez — strange selection at keeper, no? Seems to me that a club with a history of prioritizing cup runs might go with Tim Howard between the sticks in an FA Cup quarterfinal against a big club. Joel Robles batted away a few questioning shots, but didn’t seem to handle crosses with any kind of authority, and, oh yeah, he got scored on a bunch.

Koremenos: For the record, I wasn’t mocking Giroud’s performance on the pitch. That bad joke was actually a subtle attempt to remind you that your precious striker is just getting clear of a very public and messy affair. And yes, before you ask, I realize I am an asshole.

As far as Robles goes, I had been trying to block this out because it was such a baffling decision. I get the idea of letting a keeper get his own cup run. I also understand that Howard is no spring chicken, and this is good for Robles’s development. But you know what else is? Everton’s next match against Cardiff. Ditto for the one two weeks later against lowly Fulham.

When you’re a small club with nothing left to play for, it makes absolutely no sense to give Robles this game. This is especially obvious in hindsight, given that his performance could be described somewhere between “below average” and “bad.”

Howard is just a massive part of Everton’s organization defensively. When Sylvain Distin, Phil Jagielka, and Howard retire/decline/move on, there’s a real chance the club could concede 1,000 goals in a season. And that’s probably a low estimate. With Jags already out, you decide to remove Howard, too? As Vizzini would say: “Inconceivable!” 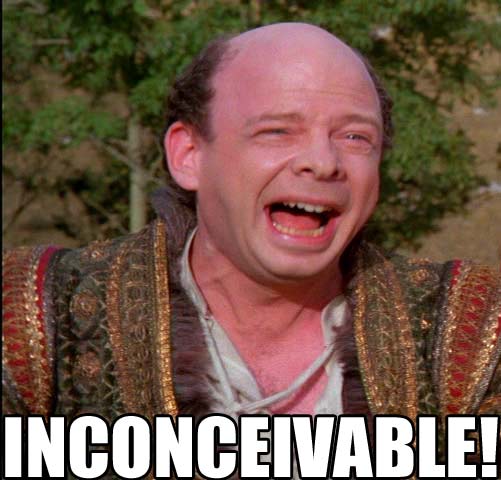 The one thing I can say with certainty is that when you promise the Champions League at the beginning of the year and that goal isn’t met, there’s no excuse not to put your best players on the pitch for the FA Cup. Against QPR, Seamus Coleman was forced to start for approximately the 15th time in a two week stretch, to ensure advancement in this tournament. It arguably led to his injury, and without one of their most valuable players, Everton went into a funk. (I think you also have some experience with injury-related funks.) It’s even more insane that Howard didn’t play in this match when you factor in things like that. Worse yet, I have a friend who is a Hull fan (seriously), who is now dangerously close to being able to legitimately hold a soccer accomplishment over my head.

This is my hell.

Anyway, since this Robles/Hull topic makes me want to start breaking things, let’s rewind for a second. Your unrestrained optimism about the league title and possible comeback against the Great German Machine clouded my big question: Should the Champions League run end against Bayern and the Premier League chase come up short, does winning the FA Cup feel like a major accomplishment?

netw3rk: Your Giroud jab sailed right over my head, it seems. Probably because the sheer amount of dudes in world football who are banging someone other than their wives makes the act itself seem rather pedestrian in the context of European sports. After Ryan Giggs sleeping with his own brother’s wife, the John Terry and Wayne Bridge fiasco, and the Ribery and Benzema underage prostitute scandal, what is there left to say, really?

Getting the win was important simply from the perspective of Arsenal’s psyche. Throughout Arsenal’s silverware drought, what differentiated the teams that won things and the teams that didn’t were mental toughness and plain bad luck. It’s not too much a stretch to consider that those things may be interrelated. Top players wear down and get injured, and the quality isn’t there in the players who replace them.

That’s what’s gone on with Ozil over the past several weeks. He’s played more minutes than he ever has before in his career, having gone the full 90 something like 20 times thus far in an Arsenal shirt. He was rarely asked to do that at Real Madrid, and he’s doing it in a more physical league. Ozil has never seen anything as brutally cynical as Stoke before. The difference between teams in La Liga and Stoke is like the difference between Xavi and Iniesta and the orcs laying siege to Helm’s Deep. Add to that the loss of some of his best passing outlets — Walcott out, Ramsey out — and, yes, it’s not surprising that Ozil has had a disappointing run as of late. A strong performance in a cup quarterfinal will get the press off his back. For a week, at least.

But there’s a simpler reason that moving on in the FA Cup is important for the club. The FA Cup is a piece of silverware, Brett. And silverware is what Arsenal needs for no other reason than to shut people up about how long it’s been since the team has won a trophy.

Koremenos: Wel,l my friend, as someone who would love to one day see his own club end a trophy dry spell, I will be a good sport and wish you and your Gunners the best of luck. Hopefully, in our next annual exchange, we will both be radiating extreme joy due to the position of our clubs. Oh, who am I kidding? That’s never going to happen.