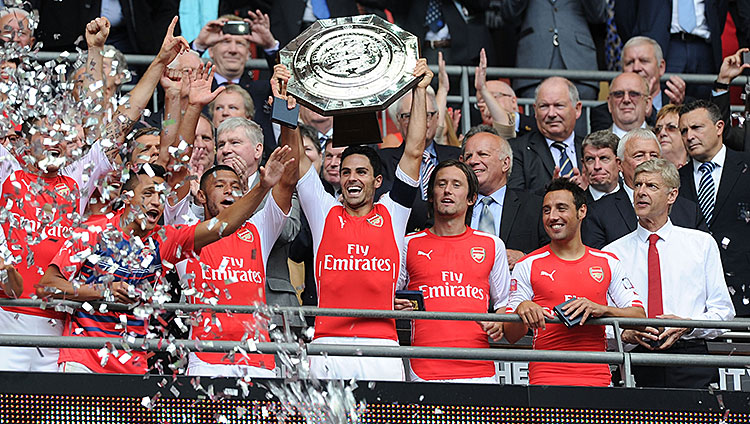 The Premier League season is almost upon us. But before the actual matches start on August 16, we sent our biggest Arsenal fan, Jason Concepcion, and our newest (and biggest) Manchester City fan, Jared Dubin, to an Arsenal bar to watch the annual season kickoff at Wembley Stadium: the FA Community Shield.

Jason Concepcion: In life, you have to take every scrap of happiness as it comes, even if that happiness comes during the preseason, in a glorified friendly, against an uninterested side playing mostly its reserves. Arsenal beat Man City to win the FA Community Shield on Sunday morning. While it’s hard as an Arsenal fan to get too excited over an essentially meaningless piece of silverware against a City team with bigger things on its mind, I think I can do it.

I made plans to lure Man City supporter/soccer newb/Yaya Touré dilettante Jared Dubin out to Brooklyn to watch the match at what was, unbeknownst to him, an Arsenal bar called the Highbury Pub. The way I figured it, since City tore apart Arsenal, 6-3, at the Etihad last season, like an angry teenager yanking the wings off a cicada, I would need, and honestly deserved, a little moral support. Plus, there was the thrill of telling Jared to travel to a faraway borough to meet me at the Highbury Pub and knowing he wouldn’t recognize the name of Arsenal’s venerated old stadium because he’d been following soccer for like eight months.

Turns out, I needn’t had have worried about Arsenal getting blown out.

Jared Dubin: First of all, let me just say what an honor it was to be invited along on this excursion. It was barely two weeks ago that you were questioning my bona fides as a fan by challenging me to name five non-Yaya players on City. I was able to do this quite easily because I am a real fan who watches games and manages Man City in a FIFA 14 career.

Of course, of the five players I named, only two — keeper Joe Hart and Taken 3 star Edin Dzeko — actually suited up for the Community Shield, and one of them (Hart) didn’t even play. In fact, most of City’s starting 11 for the match were second-teamers, but, as I’ve learned in the short time I’ve followed the team, City’s second team is better than most teams’ first team.

Naturally, things didn’t exactly work out that way. The second-teamers played like second-teamers, with Dedryck Boyata and Matija Nastasic in particular getting badly beaten throughout the first half by Yaya Sanogo, Santi Cazorla, and Alexis Sánchez. If it weren’t for the comedy factor of Samir Nasri getting “LeBron’s first game back at the Q in 2010”–level booed every time he touched the ball, the first half might have sent me spiraling into depression.

Jason: Ahh, “spiraling into depression”! Now you’re finally sounding like a soccer fan! Forget who starts; you root for City, your second team would come in seventh in the league. Forget the formations — City’s 4-4-2 versus more Arsenal’s more offensive 4-2-3-1 or United’s everything-old-is–van Gaal–again 3-5-2; following a Premier League club is about enduring nine months of operatic mood swings. It’s like being pregnant with self-loathing, suffering, and only very occasional happiness that comes exclusively at the expense of others.

That’s what drives Arsenal fans to rain F5 tornado invective down on Nasri for the vile sin of being honest about wanting to win trophies. It’s why a Vine of Steven Gerrard falling down throughout the years has been looped more than half a million times.

It’s why Tottenham fans bring up Arsenal’s 1913 encroachment on their North London turf as if it were a thing that happened two days ago.

Sure, you can name the players, know your ideal starting 11. But until you feel the cold serpent of hate uncoiling in your midsection whenever you see a Manchester United badge, you’re not there yet.

Jared: I’m very much in the early-’90s Dallas Cowboys phase of my fandom with City right now. I was born in 1987, and by the time I was forming real sports memories, all I knew was the Cowboys winning the Super Bowl more often than not. I’ve been following City for one season, and all I know is Premier League championships.

Had Gerrard not fallen down against Chelsea and essentially gifted City the Premier League, it’s entirely possible I might already be there, cursing Vincent Kompany’s name for this play even though I know he’s awesome. You don’t start hating things until you start losing. 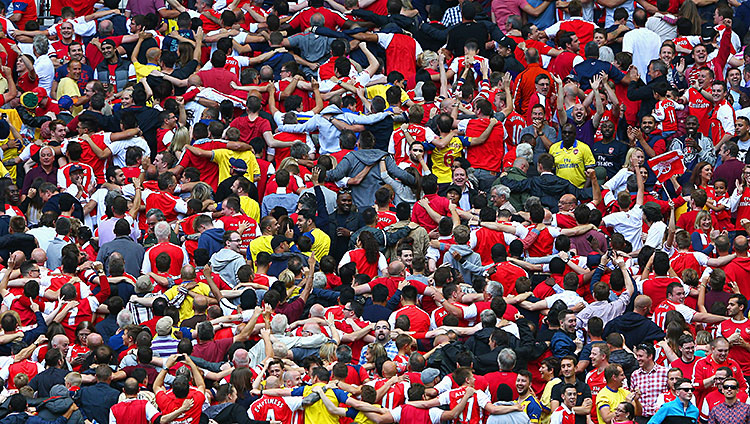 Jared: I’d rather one of these, but that’s just me.