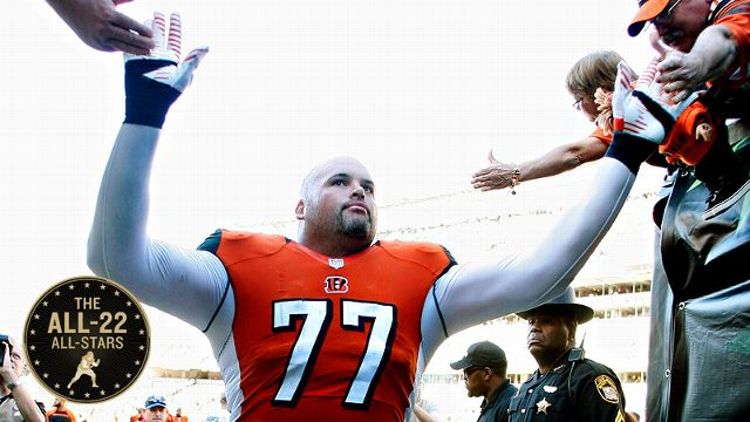 Two weeks ago, as the Bengals prepared for their pivotal Week 14 game against Indianapolis, the Cincinnati coaching staff was faced with a potential nightmare scenario this deep into a season. In the first quarter of the previous Sunday’s win over San Diego, starting left guard Clint Boling had fallen to the turf clutching his left knee. When the diagnosis eventually came, it was about as bleak as Cincy could have hoped. Boling’s ACL was torn. He’d miss the rest of the season, and the Bengals, a team almost assured of a trip to the playoffs, would have to shuffle their offensive line with only four games left.

Cincinnati was already without right guard and former first-round pick Kevin Zeitler, who injured his foot against the Ravens in November and hasn’t played since. In a way, Zeitler’s absence made the decision about how to handle Boling’s injury an easy one. With backup interior lineman Mike Pollak already starting for Zeitler, the Bengals’ best choice for dealing with Boling’s absence was to slide Pro Bowl left tackle Andrew Whitworth to guard — a change Cincinnati had made temporarily when Boling was banged up earlier this year.

Game in 25 words or fewer: One of the league’s best left tackles, who has flourished in his move to guard because of injuries along the offensive line.

This time, the move would have to stick, and the concern about moving an elite left tackle inside is that it might actually downgrade the offensive line twice over. A downgrade at tackle is guaranteed, and the differences between playing outside and inside (gaining leverage, how quickly plays develop, pass sets, etc.) are enough that a good tackle doesn’t necessarily make a good guard. Most tackles can’t change positions and maintain their level of play. Luckily for the Bengals, Whitworth isn’t like most tackles. In his first two games inside (including the game against San Diego, when he played three quarters at guard), Whitworth was dominant.

Fully healthy, this year’s Bengals had maybe the best offensive line in football. For the second consecutive season, Whitworth was among the top left tackles in the league, Zeitler and Boling (23 and 24 years old, respectively) were one of the top guard tandems around, and Andre Smith continued to exhibit the sort of ability that made him the sixth overall pick in the 2009 draft. For most lines, Boling’s season-ending injury would threaten to disrupt the harmony enough to turn what was once an advantage into a weakness, but thanks to Whitworth’s ability to adapt, the strength of the Bengals’ offense is still up front.

A still-emerging factor on a young Eagles defense.

Lavonte David, the Next Great Linebacker

The unlikely but deserving candidate for Defensive Player of the Year.

If there’s anything that could make Whitworth’s seamless move down the offensive line a bit less impressive, it’s that guard isn’t entirely new for him. A three-year starter and national champion as LSU’s left tackle, Whitworth’s first starting job after coming into the league as a second-round pick in 2006 actually came as a guard. After filling in as an injury replacement at left tackle as a rookie, Whitworth took over the starting left guard job in his second year and held it until the end of the 2008 season.

That spring, the Bengals spent the sixth overall pick on Alabama left tackle Andre Smith, who came into the draft with plenty of question marks — about missing the national championship game and about his ability to stay in shape. Still, when acquiring Smith led to the Bengals releasing long-time left tackle Levi Jones, most expected that Cincinnati had found its replacement in the first round.

It was a surprise, then, when Cincinnati opened OTAs that season with Smith on the right side and Whitworth penciled in as the starter on the left. “When I watched (Smith) on tape, [a right tackle is] what he looked like to me. It looked like he would have an opportunity to be real successful,” coach Marvin Lewis said at the time. “I feel real good about Andrew and what he can do on the other side. I feel like that kind of locks us down for a lot of years for two very key spots … as long as I’m here.”

Despite the two-year detour at guard, Whitworth had always considered himself an NFL left tackle, and the past five seasons have been his vindication. A solid player in his first two years on the outside, Whitworth played at a Pro Bowl level in both 2011 and 2012 — the latter of which actually ended in a trip to Hawaii.

Even as a former guard, the strongest aspect of Whitworth’s game a season ago was his effortless pass protection. He lost 20 pounds before the year began, and the smaller frame paid off in his ability to deal with speed rushers. This is a play from Cincinnati’s Week 5 game against the Dolphins, and it’s a perfect example of what makes Whitworth such a problem for defensive ends trying to get to the edge. He’s quick, balanced, and patient — and the combination gives him an advantage over most pass-rushers.

Top-level pass blocking on the outside is a strangely calm affair. Players who are overaggressive are typically better suited for the inside of offensive lines, where the action develops quickly and the need to dictate the action is more acceptable. There are some quick-footed tackles, though, who can create space but struggle to maintain leverage. A kick step that stops a defensive end from getting to the edge but leaves a left tackle susceptible to getting driven through his quarterback doesn’t mean much. Here, you can see how Whitworth is able to sit down and hold his ground as DeMarcus Ware attempts to bull-rush him. Part of that is getting into a pass set quickly enough, but part of it is just being a very big, very strong human being.

His abilities as a pass blocker are what turned Whitworth into one of the best left tackles in the NFL, but for the rest of this season, it’s his abilities as a run blocker that are going to be central to the success of the Bengals’ ground game.

This play came just two snaps after Boling left the game against San Diego. That the Bengals would even allow Whitworth to come in and just start pulling is a testament to their confidence in his knowledge of the offense and his ability to adjust on the go. But here — and really, throughout the wins over the Chargers and Colts — Whitworth hasn’t just been an adequate puller. He’s been an excellent one. He stops his feet a bit on the play above, but because he was able to locate his man coming through the hole and was quick enough coming around, the play ends with Manti Te’o on the ground and with Whitworth jawing in his ear.

That edge that Whitworth plays with is sure to endure him to anyone prone to geeking out over offensive line play, but it’s also part of what has allowed him to transition from a position predicated on technique to one dependent on physicality. A lineman with the feet to play offensive tackle is likely athletic enough to pull. It’s in a phone booth where he’d be less equipped to succeed, but as you can see here, Whitworth doesn’t really have that problem. He has an angle on the three technique before the play begins, but he beats and turns him so thoroughly that Whitworth is free to celebrate Giovani Bernard’s run before it’s even over. There are some left tackles who excel in pass protection but don’t have the temperament to ever be dominant in the run game; Whitworth isn’t one of them.

This is one of my favorite plays of the year by any offensive lineman, and although it happened while Whitworth was at tackle, it’s an example of the combination of traits that has allowed him to succeed at guard and keep Cincinnati’s line free of holes. Before releasing on this screen to A.J. Green, Whitworth manages to get a solid chip on Marcell Dareus to slow down the defensive tackle on the way to Andy Dalton. Afterward, Whitworth peels off and bursts downfield. On his way, he manages to send Jim Leonhard flying — seriously, off his feet — with one hand. That would be enough, but because he sent Leonhard airborne without slowing down, Whitworth also manages to get a piece of Da’Norris Searcy as Green scampers for 50 yards.

“Ability to occasionally turn into Bobby Boucher” won’t show up on many scouting reports, but feats like that one — a result of equal parts athleticism, strength, and effort — show off just what type of player Whitworth is at this point in his career. Not many teams would ask their Pro Bowl left tackle to make a full-time switch to guard, and it’s because not many teams could.