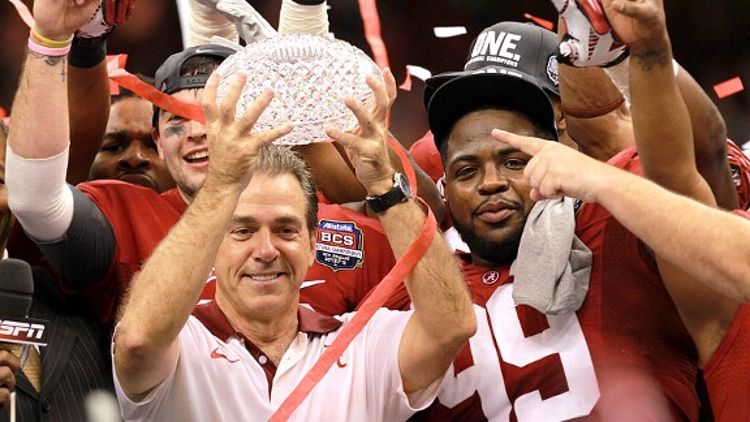 Despite Alabama’s loss to last year’s Big 12 also-ran Texas A&M, reports of the SEC’s death are greatly exaggerated. And entirely premature. That conference is like the sunrise. You can’t stop it.

From a statistical standpoint, there is only a 1-in-7 shot that all three of the remaining unbeatens in college football — Notre Dame, Oregon, and Kansas State — finish the regular season without a loss.

People freaking out that a 12-0 Notre Dame might not play for a national championship are having the wrong nervous breakdown. Those people should have the heebies and/or jeebies about either of the SEC teams in the current BCS top five (Alabama and Georgia) ending up in Miami. Historically speaking, it’s not at all unlikely that multiple teams near the top of the polls still lose. Should that happen, and should the SEC step its way into another title game, it might also be totally undeserved.

• In 2005, USC and Texas went wire-to-wire in the polls to face off in one of the better national-champions games ever. Since then, an SEC team has won every BCS National Championship, and each time, some late-season reshuffling in the polls has cleared the path for a Southern school to claim that ridiculously impractical crystal football. If Alabama (or Georgia) would like to repeat the past, they would do well to learn from it.

• In 2006, the top five BCS teams in the fourth week of the rankings — roughly this point of the season — were (in order) Ohio State, Michigan, Louisville, Florida, and Texas.

That week (in a Thursday-night game) Louisville lost to Rutgers 28-25. Then on Saturday of the same week, K-State beat Texas 45-42. That made the top five OSU, Michigan, USC, Florida, and Notre Dame.

Michigan lost to Ohio State the following week, but stayed at no. 2 in the BCS. Then Notre Dame lost to USC. A week later, USC lost to UCLA. That’s five losses in the final four weeks of the poll. That doesn’t even count the “loss” Michigan suffered by not playing in the week’s final season. Simply by winning a game while the Wolverines sat home, the Florida Gators jumped Michigan for the BCS title matchup against Ohio State.

• In 2007, starting again with the fourth week of the rankings, the somewhat unbelievable top five were Ohio State, Boston College, LSU, Arizona State, and Oregon.

The week those rankings were released, three of those teams — OSU, BC, and ASU — all lost, leading to another somewhat improbable top five of LSU, Oregon, Kansas, Oklahoma, and Missouri.

Until they both lost the next week. Even more bizarre, LSU and its two losses (the second of which was a late-season home defeat to Arkansas) somehow (read: complete bullshit) jumped from seventh to second, and they did it with the help of nine losses in the top five over the last four weeks of the season.

• In 2008 the poll read Alabama, Texas Tech, Texas, Florida, Oklahoma before finishing Oklahoma, Florida, Texas, Alabama, and USC. There were a mere two losses in the top five during the span in question.

• The 2009 edition went from Florida, Alabama, Texas, TCU, and Cincinnati to Alabama, Texas, Cincinnati, TCU, and Florida. That season there was only one loss from Week 4 on, and four teams actually finished the regular season undefeated. Yet nobody seemed to have much problem with shooing the Horned Frogs off to get destroyed by Wisconsin in the Rose Bowl (where, incidentally, they didn’t get destroyed).

The following season was similarly stable near the top. By Week 4, both Auburn and Oregon were ensconced atop the rankings. Still, there were two losses among the top five teams behind them — the same number Alabama or Georgia would need this season to make it to the BCS title game.

• Last season, there were seven losses in the top five from Week 4 on. The only one anyone remembers is the Oklahoma State loss to Iowa State that set up the Alabama-LSU rematch, but in the rest of the top five, Stanford, Boise State, Oklahoma, Arkansas, Virginia Tech, and Oregon all managed losses over that time span.

All this means that in all but one season of the SEC’s title-claiming run, there have been at least two and as many as nine losses in the BCS top five from Week 4 of the poll through the end of the regular season. There’s a similarly good chance this season. Alabama’s loss last week came during Week 4 of the BCS standings, so we’re halfway there already.

The good news for SEC fans is that another loss among the top five is (almost) guaranteed to happen. The bad news is, if both teams win out, it will involve either Alabama or Georgia in the SEC Championship Game.

Just looking at recent history, it’s better to err on the side of additional reshuffling at or near the top of the poll. And looking at the actual schedules of Notre Dame, Oregon, and K-State, all three have very loseable games left.

Notre Dame goes to USC to play a Trojan team with nothing to lose. Oregon has its toughest stretch of the season ahead of it. They host no. 13 Stanford this weekend before traveling to Corvallis for the Civil War against no. 16 OSU. Should they win those, they will have to play the Pac-12 championship game.

K-State looks to be in great shape, but if either or both of the remaining opponents (Baylor, Texas) don’t turn the ball over habitually against the Wildcats, they probably have a chance to win. It might have been early in the season, but lowly 4-6 North Texas trailed K-State by one midway through the third quarter, and that was only because of a missed extra point. Incidentally, the Mean Green are the only team to win the turnover margin against K-State this season. So if Baylor or Texas can protect the football, they should have a legitimate chance to beat K-State.

So relax, Alabama (or Georgia) fans, your BCS hopes aren’t nearly as dead as the rest of the non-SEC world might have you believe. Unfortunately, should at least two of Notre Dame, Oregon, and K-State lose, it’s still not a given that Alabama deserves one of the two slots in Miami. They will probably get it, mostly because, well … Alabama. Starting the season at no. 2 and rolling over opponents until last weekend meant a loss to Texas A&M only dropped the Tide three spots. The problem is that those opponents were never much to begin with.

Michigan never played up to their preseason adulation, and the records of the Tide’s next six opponents following that win in Dallas are as follows (SEC conference marks in parenthesis): 6-4, 4-6 (2-4), 3-7, 5-5 (2-4), 5-5 (2-5), 4-6 (0-6). The only team with a winning record in that stretch is Western Kentucky, which currently sits tied for fifth in the mighty Sun Belt conference.

The first seemingly legitimate opponent Alabama played was Mississippi State, on the last weekend in October. Going into that game, the Bulldogs were 7-0 against Jackson State, Troy, South Alabama, Middle Tennessee (four non-BCS conference schools) and three conference foes who currently have a combined zero SEC wins — yes, Tennessee, Auburn, and Kentucky are 0-20. So even MSU might have been just a tad bit overrated heading into Tuscaloosa. The Bulldogs lost their next three games by a combined 76 points.

Basically, Alabama has played two tough games — LSU and Texas A&M. They are 1-1 in those games. Sure, if they win out, Alabama would add a win over Georgia to its résumé, but you can — and should — similarly belittle Georgia’s schedule.

The Bulldogs are also 1-1 against “good” opponents — losing at South Carolina and beating Florida at the Cocktail Party. The rest of the Bulldogs’ SEC schedule are a combined 8-32. Repeat: It’s November, and save for the two games against ranked teams, the rest of Georgia’s conference opponents have a combined eight wins. And Vandy has half of those. At 4-3 in the conference and 6-4 overall, the Commodores are the only conference opponent aside from SC and Florida that have made it to bowl eligibility.

When Vanderbilt is part of the argument for your team, your argument is probably bad.

The 2012 edition of the SEC is not nearly as brutal as the past few seasons. It’s actually not brutal at all. Arkansas and Tennessee are bad. Auburn is worse. And Kentucky isn’t even the best team in the football-poor state of Kentucky (Western Kentucky again, FTW!). Oh, and why is two-thirds of the SEC playing FCS (né I-AA) schools this coming weekend? After a four-game stretch including 1-9 Kentucky, 5-5 Ole Miss, and 2-8 Auburn, does Georgia really need a breather against Georgia Southern?

There is a distinction to be made here. Alabama might very well still be one of the two best teams in college football, but with their schedule, it’s completely rational to argue that they haven’t proved it the way Oregon, K-State, and Notre Dame have over the course of 12 games.

Still, out of habit or convention, should two of the current BCS top three lose, either Alabama or Georgia will probably play for the national championship. Again, the national narrative about college football would be about the SEC’s dominance, with almost nobody bothering to argue that a one-loss K-State, Oregon, or Notre Dame might still be more worthy of a spot in the BCS title game than any one-loss SEC team.

Touchdown Jesus, help us all.