Actual Proof That the Atlanta Falcons Will Win on Sunday 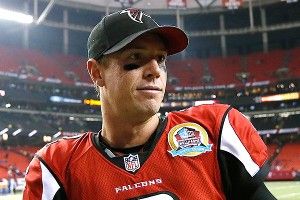 The Atlanta Falcons are playing the Seattle Seahawks in the divisional round of the NFC playoffs on Sunday. Vegas has the Falcons favored by 2.5, but you get +3 for just being the home team, which essentially means Vegas has no clue what it thinks.

Thankfully for you, the curious public often interested in how the future will turn out, I do know what I think. Who knows what “algorithms” and “formulas” and “educated guesses” places like Odds Shark implement (cue my knees getting Gilloolied in 5 … 4 … 3 …), but chances are they all ignore the most important aspect of predicting outcomes: feelings.

I know the Falcons are going to win, because that’s what my feelings tell me will happen. That’s all I’ve got, and I couldn’t be more thrilled.

Yesterday, on ESPN’s First Take, a guest came on and made a bold NFL playoff prediction:

In case you’re in the dark/hate America, @fivethirtyeight is the Twitter handle of statistician/oracle/witch/friend of Grantland/new enemy of mine Nate Silver. He impressively went 50-for-50 on how all the states would swing in this past election, and now he’s predicting the football playoffs as a way of continually upping his street cred, and, as a byproduct, going General Sherman on a city’s dreams.

Do not listen to this man. While his long division probably does give proof that the Seahawks will defeat the Falcons, everyone knows there are no feelings involved when it comes to long division. Predictions are all about feelings, especially when it comes to the playoffs. At this point, all the teams are good, which suggests basing predictions on talent (now a borderline constant) is an exercise in futility. What’s left when talent’s out of the equation? FEELINGS.

Backing me up on the feelings train are individuals who haven’t a single statistical reason why the Falcons will win, but know it in their hearts that they are correct. Enter Mark Wahlberg:

Boston’s Wahlberg said, on camera, for all to see:

“Handle your business this weekend, stomp the Seahawks, then stomp the 49ers or whoever else comes next, and then you’ll see my boys the Patriots in New Orleans, and then I’ll see you guys in person, and if you guys beat the Patriots in the Super Bowl, I don’t care, because Matt Ryan’s a Boston boy.”

For some reason, despite not really knowing where Matt Ryan is from (went to BC, but from Pennsylvania), or really caring about who the Falcons will play in their playoff march, Mark still believes this is a Super Bowl team. After seeing this clip, it’s really hard to believe the Seahawks have a chance.

Back to Nate Silver:

To Silver: “Based on your statistics and a metric system that you’ll explain a little bit later …” Sorry, Nate, but there won’t be a later. Why?

Enter Big Boi, a day earlier, on the same program:

“As long as everybody stays out of Magic City and Diamonds of Atlanta, we are going to be good.” — Fact.

“Wait until Monday to go. Everybody stay home. And make it a Blockbuster night.” — I think he means Netflix, but yes.

“The Super Bowl has to come through Atlanta.” — I read that this is true somewhere. Probably the NFL manual.

“So, Russell, y’all need to make it on down to Magic. Marshawn Lynch, y’all go on down.” — Just tell Wilson it’s a leadership seminar or something. As for Marshawn, tell him it’s a strip club.

“Atlanta is turnt up.” — This is always true, but it’s especially accurate right now. Over the holidays, I saw two 70-year-old women playing doubles tennis together, both wearing Falcons hoodies and fitteds.

First Wahlberg and now Antwan? I almost feel like we have a bye now. Also, look at that hat. AND LOOK AT THAT FUR.

And now in motion:

What are Seahawks faithful talking about in the days leading up to the big game?

Oh, word? The actual bird-superiority debate? Let’s just call the game now. This is going to be ugly. Move the team to Sacramento, ASAP.

Grantland’s football guru, Bill Barnwell, predicted a 24-20 win for the Falcons earlier today. I trust his prediction, because he’s a man not devoid of feelings. My prediction, like his, is also a Falcons win, but with a slightly more lopsided score.

I may not have predicted the election, Nate Silver, but I did state that Joe Biden would laugh for 92 percent of his VP debate.