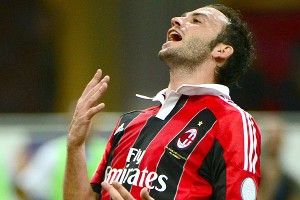 Earlier this summer, a group of AC Milan fans gathered for a vigil outside the club’s headquarters near via Turati in the center of Milan. They came with flowers and candles and recited prayers. At the end, they laid their beloved club to rest. The banner outside read, “AC Milan, December 16, 1899–July 22, 2012.” On it, a message that served as a final twist of the knife: “He lacked affection for his loved ones.” Milan received the “you’re dead to me” treatment from its fans the day it sold Thiago Silva and later Zlatan Ibrahimovic to Paris Saint-Germain. The previous season the club allowed Andrea Pirlo to join Juventus instead of renewing his deal. The thinking inside Milan was that Pirlo’s best days were behind him. The midfielder responded by leading Juve to an undefeated season, winning the Scudetto along the way. He then turned in a performance for Italy at Euro 2012 that cemented his position as one of the greatest midfielders of his generation.

The sales of Milan’s top players has resulted in the lowest number of ticket sales in the Silvio Berlusconi era. In place of its experienced stars, Milan brought in the 17-year-old Frenchman M’baye Niang and Barcelona castaway Bojan Krkic on loan. The club once known for extending the careers of senior players now boasts a forward line, which also includes Alexandre Pato, with an average age of 22.5. Early returns from the youth movement have not been positive. Milan lost to Atalanta at home on Sunday, marking the first time in 80 years that the club lost its first two home matches.

These are new days for AC Milan. When the club begins its Champions League campaign Tuesday night against Belgian side Anderlecht, it will do so under a heavy cloud of financial uncertainty. More bluntly, Milan looks like little more than also-rans this year. And if you want to know how it all went pear-shaped for AC Milan, just follow the money.

Most football fans have probably never heard of Fininvest. It’s a company in the Berlusconi empire that is, or was, largely responsible for bankrolling AC Milan’s success. A quick look at Fininvest’s balance sheet reveals that in 2011 it covered AC Milan’s operational loss of €68.9 million (roughly $90 million) and losses of €71.7 million ($94 million) in 2010. Milan’s own financial reports from 2010 show that total revenue for the club stood at €227.7 million, with expenses topping €329 million. The biggest expense was players’ salaries, which amounted to €192.8 million, making Milan third only to Real Madrid and Barcelona in wages. Bizarrely, Milan spent 88 percent of its revenue on wages. Two other things affected the downturn in Milan’s financial fortunes. The TV rights for Serie A were once negotiated on a team-by-team basis, and with Milan’s success on the field came greater demand for the rights to broadcast its matches. That changed when the Serie A clubs decided to negotiate the rights collectively and split the pot. Milan also doesn’t own their stadium, the San Siro, which means it cannot derive funds from events that are held there.

In July 2011, a court levied a fine of more than $700 million against Fininvest for improper judicial conduct that aided the company in its 1991 acquisition of Italy’s largest publishing company, Mondadori. Without the endless pipeline of Fininvest funds to paper over Milan’s financial cracks, Berlusconi had to turn off the faucet, sell his best players to lower the wage bill (the sale of its biggest stars will save Milan close to $150 million in wages), and put his faith in youth. “The financial situation doesn’t allow spending any longer like in the early ’90s. We have to build great teams thanks to youngsters and through a scouting network,” Berlusconi said. It is a tough pill to swallow for Milan’s fans, but it is also a decision that many other clubs will face in the not-too-distant future. It would be naive to believe that Berlusconi suddenly found religion and is tired of throwing money into an endless pit. Rich men buy sports franchises knowing they will operate at a loss. The real force moving Berlusconi and the rest of Europe in the direction of fiscal responsibility is UEFA president Michel Platini.

Platini means business and clubs are running scared. Last week UEFA sanctioned 23 European clubs for financial mismanagement that included failure to pay taxes, transfer fees, and player salaries. As part of the sanctions, UEFA will withhold prize money from those teams participating in this season’s Champions League and Europa League.

It is easy to cast Platini as a self-righteous crusader. After all, who is he to tell clubs how much money they can spend? If Berlusconi and the rest of Europe want to drive off a financial cliff, let them. Ever since Roman Abramovich moved the fiscal goalposts of the sport with his purchase of Chelsea FC, the culture of financial excess has spread across Europe. It’s not unreasonable to imagine a doomsday scenario like what happened with the Wall Street banks where as a result of profligate spending the system implodes. The most recent UEFA benchmarking report revealed that the collective debt of European clubs was close to €8.5 billion. Bankruptcy already claimed one of the most storied clubs in Scotland when earlier this year Rangers FC declared bankruptcy and emerged as Rangers NewCo, currently playing in the Scottish third division. Portsmouth FC, FA Cup winners in 2008 and runners-up in 2010, is now a bankrupt club and a court is tasked with figuring out who will own the club after the bankruptcy proceedings. These are not one-off examples but part of a wider trend that Platini wants to stop. If Berlusconi got the message, it’s likely that other big clubs will fall in line instead of risking suspension from Europe’s most lucrative competition.

Here's the NFL Thing We Used to Call 'Fabs and Flops,' Week 2