Here’s the NFL Thing We Used to Call ‘Fabs and Flops,’ Week 2 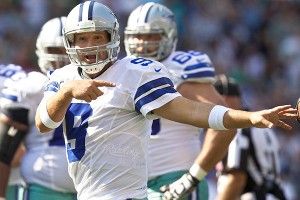 All aboard the Romocoaster! After 10 days as the shiny, winning-friendly leader of the Cowboys, the new Tony Romo suddenly crumbled to reveal that it was the same old loser all along. All the doubts that were erased by Romo’s triumphant 1-on-53 victory over the Giants were rewritten over the course of 60 minutes, when he single-handedly caused the Cowboys to lose to far inferior opposition.

And people say, stat guys don’t watch the games! If you take a look at how Romo actually played against one of the league’s most underrated defenses on Sunday afternoon, as I did, you’ll see a guy who wasn’t really all that much different from the player who took down Dallas’s big blue elephant. It would be downright impossible, though, to ignore how little Romo actually got from the players around him.

To put it kindly, Dallas’s offensive line got torched by Seattle’s front four. It was one of the more obvious examples of a game in which sacks fail to tell the story of pass pressure. Although the Seahawks only sacked Romo on one of his 41 drop backs, they knocked him down six times, pressured him into scrambling on a half-dozen more throws, and forced a number of premature throws and checkdowns.

Virtually every Cowboys lineman was at fault. Left tackle Tyron Smith had opposite defensive end Chris Clemons eat his lunch all day long, starting with a swim move on the opening play that ended up with Smith facing his own end zone and Romo checking down for a small gain. Clemons was able to force a number of desperate scrambles from Romo on plays in which the Seahawks only rushed three or four linemen, and his twists with other defensive linemen gave Smith and left guard Nate Livings fits.

The only answer the Cowboys had for Clemons, honestly, was Romo. His best play of the day came during Dallas’s first drive, on a play in which the Cowboys blew a protection and failed to block Seattle’s best pass rusher. With Clemons rushing at him at full speed, Romo manages to juke out Clemons with a false step, does a 180, rolls out against the grain, and then fires a strike to a closely covered Kevin Ogletree for 26 yards. It’s an absolutely ridiculous play that will get no attention because of the final score.

Romo was also victimized by a number of drops. Now, it’s true that every quarterback is going to see a drop or two per game, but the drops afflicting the Cowboys on Sunday were particularly egregious. Everyone’s definition of a drop is different, but by my count, the Cowboys dropped six very catchable passes on Sunday. Four of the drops were by the usually sure-handed Jason Witten, who had a dismal day. Among Witten’s drops were an easy third-down conversion on the opening drive, a 25-yard pass up the seam where the closest defender in coverage might have been Felix Hernandez, and a 50-yard bomb from Romo that hit Witten in the hands. Dez Bryant was responsible for the other two drops, including a drop that immediately preceded Romo’s ugly interception.

Oh, that interception? It’s worth a look. You can see what happens pretty clearly: Romo tries to throw a quick slant, pulls it down when a dropping lineman gets into his throwing lane, and then tries to improvise by throwing the ball across his body to the opposite hashmark. It was a good decision (not throwing the slant) followed by a terrible one (the actual intercepted pass). Romo also had a would-be interception on a second-and-20 pass later in the game dropped.

For me, the problem with excoriating Romo for that admittedly bad decision is the same issue that I mentioned with regard to Jay Cutler last Friday. The Romo who tried to improvise a throw to Witten on the fly was the same guy who eluded the Clemons rush and hit Ogletree in traffic with a perfect throw. How do you extricate the bad Romo from the good one? If you try to eliminate the improvisational decisions of the guy who made the bad pick, don’t you end up with a guy who gets laid out by Clemons? Is that better?

In the end, the Cowboys just weren’t able to overcome the hole that their special teams left them in. Felix Jones fumbled the opening kickoff, producing a field goal, and the Seahawks blocked Dallas’s opening punt before recovering it for a touchdown. Seattle was up 10-0 before the Cowboys had any idea what hit them, and their pass rush promptly pinned back their ears and gave Dallas fits. That’s a ride that would even give the Tony Romo of Cowboys fans’ dreams heartburn. The Cowboys need a better week out of their special teams and offensive line against the Buccaneers on Sunday, not a new quarterback. The Romocoaster should be just fine.

Rams in a Jam

Why can’t the Rams ever get a healthy season from their offense?

During their Week 1 loss to the Lions, the Rams’ offensive linemen began dropping like flies. Center Scott Wells, signed away from the Packers during free agency, suffered a fractured foot that forced him to be placed on injured reserve and miss the remainder of the season. Left guard Rokevious Watkins, a fifth-round pick who won the starting job as a rookie, suffered an ankle injury that forced him to miss Week 2. And left tackle Rodger Saffold had the scariest injury of all, a stinger that had him down for a long time and caused him to be carted off the field.

Saffold actually recovered well enough to start against the Redskins on Sunday, but he suffered a sprained MCL on a fumble recovery that will cause him to miss a couple of weeks. His replacement was infamous Jets castoff Wayne Hunter, a poor pass protector on the right side who was now stuck playing the more difficult position of left tackle, and even he went down with an injury during the Redskins game. That left the Rams with a third-string left tackle and second-stringers at left guard and center. And they still won!

The weird thing is that this sort of injury stack isn’t anything new for the Rams. During my time at Football Outsiders, I developed a metric called Adjusted Games Lost (AGL) that measured how significantly injuries affected a team, specifically focusing on their intended starters. In both 2010 and 2011, the Rams had the least-healthy offense in all of football. They were also the least-healthy offense in 2007, improving to the lofty heights of ranking as the third-most injured offense in 2008 and sixth-most in 2009. With injuries to those four linemen and a groin complaint by Steven Jackson, they’re well on their way to topping the charts again in 2012.

What is it about the Rams that makes them so injury-prone? It’s hard to tell. Normally, when a team suffers a consistent string of injuries over multiple seasons, I’m inclined to suggest that it’s randomness or something about their player acquisition policies that’s delivering health risks to the team. (The Colts, as an example, were perennially unhealthy on defense during the Bill Polian era, something likely owing to their philosophy of drafting smaller, faster players.) The Rams have been too hurt for too long, though, and they’ve rebuilt the roster under both Steve Spagnuolo and now with Jeff Fisher, who perennially had one of the league’s healthiest teams in Tennessee.

It’s unclear to me why the injuries are consistently occurring, but they’re certainly meaningful. Research I conducted with AGL found that about 25 percent of a team’s year-to-year change in wins is accounted for by the change in their injury rate. If you’re looking for a reason why the Rams have been so downtrodden for years, injuries stand out as an obvious cause. And if the Rams can’t stay healthy on the offensive side of the ball during 2012, it’s going to be very difficult for them to get out of the NFC West basement.

One More Note on the Refs

Last night’s Broncos-Falcons game made another point regarding the replacement referees very clear. When John Fox used his second challenge in the first half and promptly lost, he was left without any protection against flat-out incorrect decisions for most of the remainder of the game. Fox got lucky when Demaryius Thomas’s second-quarter touchdown catch — called an incomplete pass on the field — came inside of two minutes and was automatically reviewed by the officials upstairs. Had Thomas’s catch come on the other side of the two-minute warning, the Broncos would have been left without any recourse for questioning the decision.

It’s become pretty clear that the replacement referees are simply going to make more mistakes on routine plays than the old officials. Because of that, coaches are more likely to need their challenges to question plays, which changes the way that the decision-makers should be valuing their precious red flags. Since the league rules limit you to two challenges unless you get both correct, the cost of a failed challenge is greater than it would otherwise normally be. Coaches need to account for that by saving their challenges on plays where the outcome of the challenge is in doubt for only the highest-reward situations. Fox was forced to face the terror of being subject to referee error for an entire half because he used a challenge in a low-reward situation and failed. Until the real referees get back, other coaches can’t make that same mistake.

And One More Note on John Fox

Fox also mismanaged the clock at the end of last night’s loss. It was a minor tactical mistake that didn’t affect the outcome of the game, but it’s pretty clearly theoretically wrong and worth talking about for future reference.

Julio Jones’s killer third-down conversion saw him fall to the ground with 2:30 left. The Broncos had one timeout left to go with the two-minute warning, giving them two chances to stop the clock in a desperate attempt to get the ball back. With the roars of the Atlanta crowd in their ears, the Broncos let the clock run to the two-minute warning and then used their final timeout on the ensuing first-down run, stopping the clock at 1:55.

If you want to get your team the ball back with as much time as possible, that’s just not the correct move. Let’s assume that the Falcons don’t get a first down on this new series and have to punt the ball back to Denver, and that each play uninterrupted by a stoppage of time takes 45 seconds (40 seconds off the game clock and five seconds for the play itself). Here’s how the time frame works under Fox’s decision to call the timeout after the two-minute warning:

What if Fox called the timeout as soon as humanly possible? That would have stopped the clock at 2:30 before the new set of downs. Let’s run the same chart under the same assumptions and see how much time the Broncos would have had at the time of a Falcons punt …

Where did those five seconds come from? They’re the time actually used by the first play of the new series. When Fox uses his timeout after the two-minute warning, they’re the seconds from 2:00 to 1:55, meaningful time being used up. When he uses it immediately, the play uses up the five seconds between 2:25 and 2:30, time Fox is otherwise abandoning by letting the clock run.

In Monday night’s game, the decision didn’t really matter. Had the Broncos gotten the ball back with a big punt return or a Ryan Williams–esque fumble, though, that would have been five key seconds that Fox threw away for no benefit. It’s an easy call to take the timeout earlier.