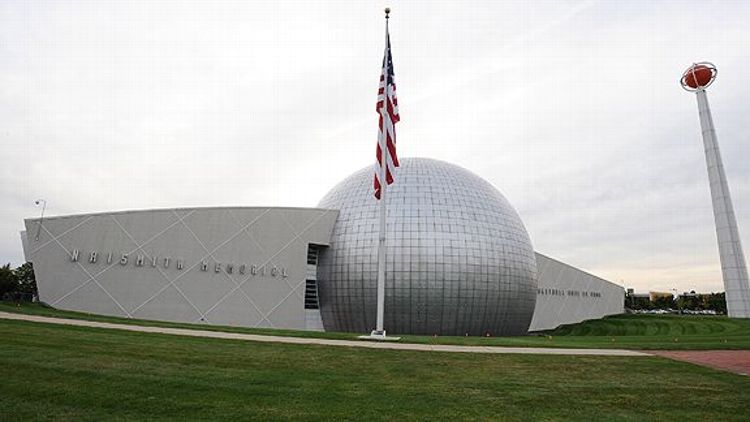 “People get to keep their jobs — that’s all I was concerned about,” Don Young said on Saturday morning, standing a few feet away from a small, illuminated case that held one of Pete Maravich’s socks. Don’s a design engineer for Cablevision in the Bronx. He came up to Springfield to maybe be reminded that in the not-so-distant past, the game seemed to have a conscience. Don is relieved at the NBA labor settlement because now his daughter, a dancer for the Nets, won’t have to move back home.

But, wearing a heavy-lidded expression that speaks of little tolerance for the closed-door strategies of the corporate stratosphere, he is clearly not about to thank the league for its largesse in opening the arena doors in cities blighted for two months by deserted bars and idled beer vendors. There’s been too much collateral damage already.

From far below, the sound of dozens of dribbles down on the Court of Dreams rose up to our perch on the catwalk of the Honors Ring. Just down the stairs, Dennis Rodman’s Hall of Fame induction ensemble hung poised and ready for the next Prince tour: blue feather boa (he’d have to die it purple), red-trimmed black jacket, linen Victorian sleeves erupting foppishly from the cuffs like daisies.

The Naismith Memorial Basketball Hall of Fame seemed like the right place to be on the morning after David Stern and Billy Hunter and their minions deigned to think they could win us back with a gift-wrapped Christmas-tripleheader bribe wrapped in a shiny bow; the Springfield Spheroid (it looks like a pavilion from a World’s Fair in a Midwestern city) doesn’t try to drape its sport in some sort of faux-nostalgic aura of clean and tidy. This hall feels like a celebration of modern, pan-race, pan-gender hoops, visited — on this, my third trip in a month — by a lot of average people on average incomes who, if they present their Big Y supermarket discount card (“Proud to be American-Owned Since 1936!”), find it eminently affordable.

The Round Mound of Urban Rebound might be nothing but an afterthought in the national hall of fame pantheon, but at least it isn’t a red-brick mausoleum in Cooperstown that feels as if its permanent exhibit should be The Golden Age of Farm Implements, or the giant orange-juice juicer in Canton, where men inducted in mustard jackets recite the Boys’ Life Sports Heroes Library edition of their careers.

True, part of my motivation for Saturday’s pilgrimage on the morning after the tentative settlement was personal. With Sean Avery back, and Callahan a hero after paying his dues in the minors, the Rangers are back on my winter radar, promising to make January bearable again. So I wanted to see if a glimpse of the hilarious acid-flashback Nugget warm-ups from the 1970s and Arvydas Sabonis’ Latvian Olympic jersey could reboot my interest in a league wherein during the lockout (a) Amar’e bought a fifth property, a $4 million home in Florida with a garage that fits nine cars, and (b) owner Michael Jordan, who used to be cool, came out of it all looking like some 19th-century industrial robber baron itching to sic Pinkertons with semiautomatics on the unruly union mobs milling outside the factory.

But I was also curious to take the pulse of the hoop-people who’d come to visit the shrine to seek refuge from the labor idiocy, drawn by memories not of dusted gilded ages, but a past you can still reach out and touch, and dozens of amazingly cool uniforms, from Moses’ high school jersey to a shirt from the barnstorming Arkansas Lassies.

I’d expected to find some anger, and occasionally, I did. “It was disrespectful,” said Wayne Lawson, a McDonald’s manager from Toronto. “It was like taking the kids’ cookies away.” “They tarnished the brand,” said John Lester, a management consultant from Dallas. “The game took some bad PR.”

“Little folks losing out, too many egos not looking out for the people, when it’s the people’s game,” Larry E. Harris of Upper Marlboro, Maryland, told me. Turned out that Larry E. was speaking in the present tense because he didn’t know an agreement had been reached, and when I told him, he didn’t yelp for joy. He didn’t even say, “Finally!” What he said was, “Really?”

To those with a dog in this hunt, what should be scary is that the overwhelming vibe in the game’s birthplace on Saturday was indifference. “I was fine with no season,” said Keith Huling, a George Mason grad, who, while living in northern Virginia, finds it difficult to be a Wizards fan. “Both sides were greedy. I’m paying attention to college now.”

Then, admittedly, my sample was skewed. Visitors to The N (they don’t actually call it that; I just made it up) don’t stroll the circular Honor Ring on a catwalk attached to the inside of the dome (it’s like encircling the inside of a giant, empty skull) to be reminded of the way LeBron’s palmy/pathetic SuperGroup skewed the sport toward Reality Show for the Super-Rich last year; they come to enjoy the way the sociological, demographic, and cultural evolution of their sport has happily mirrored for more than a half-century the evolution of the nation it’s been playing for: Walking the Naismith’s Honors Ring chronologically, starting 120 years ago, yes, you have to yawn through dozens of portraits of guys with names like Steinmetz and Borgman, and a team portrait of the Buffalo Germans (the Buffalo Germans?), but you soon gradually segue into teams like the New York Rens, and finally the appearance of names like Russell and Chamberlain and Baylor.

Then, farther down the ring, hairstyles get wonderfully weird and names get increasingly evocative, each calling up a smile and a style: Thurmond, Frazier, Monroe, Dantley, Olajuwon, Gilmore, all pulling you into what seems like just a few weeks ago until, finally, you reach the surreally perfect demographic of this year’s inductees.

Not to mention the hall’s odd, often random, and delightful assortment of artifacts, like Nera White’s high-top sneaker. Nera led the Nashville Business School’s AAU team to 10 championships in the ’50s and ’60s. Somehow, Nera’s stern visage made it cooler than the sock. Yes, the place is missing some of the artifacts I’d really like to see — Michael’s gambling IOUs, Wilt’s motel keys, Rodman’s [insert tasteless artifact here] — but in Springfield urban counts as much as rural, Artis as much as Auerbach. Inside this globe, recent history counts much more than the past. To hang in Springfield is to be reminded that the NBA has not only included but embraced the fringe, whether it was little Jewish guys playing in Utica, the first black guys playing in Boston, the women barnstorming Kansas, or a German named Nowitzki bringing the whole thing full circle, to one of the greatest Finals in decades.

The question for roundball mecca now is what its exhibits are going to look like in the future, after this ugly debacle — whether, after serving as the sport of the people for so long, the place has to veer off and mirror the current American 1-percent-ist landscape. And more specifically, what’s going to go into the big empty space that the “Michael Jordan Brand” section of the sphere, sponsored by Nike, is vacating next week, after two years of commercial sponsorship?

On Saturday, it was weirdly empty. Maybe Jordan the player who had become Jordan the hard-line NBA owner has truly alienated the average fan? Maybe the crowd sensed that there was something sinister about this corner of the hall, wherein the likes of Bob Lanier gets memorialized by one sneaker (true, it’s the size of a rural-delivery mailbox), but a sneaker company can buy Michael a whole corner of the building?

I’m thinking, replacement-wise: LeBron’s high school jersey? Not likely. A 3-D video loop of The Decision? Probably not. The pen and document Stern will use to sign the final agreement? I don’t think so; blood fades on paper. A dollhouse version of the 15,000-square-foot Stoudemire Cottage?

Mary Lester had a suggestion. “Hey, where’s the Maverick stuff?” she asked an usher, who didn’t know, because there wasn’t much. Mary, from Dallas, had just watched a virtual Jason Kidd school her son in the Virtual Hoops exhibit (“Dribble! Dribble. Shoot! Shoot! Aw, he stole it again!”)

Yeah, how about a Nowitzki display case, with the bandage he wore on his broken finger when he banked in those left-handed layups, and a bottle of the medicine for the flu that Dwyane and LeBron mocked on their way to their ignominious loss, and a blow-up of that shot, LeBron and Dwyane frozen in the tunnel before the loss, like Ruby shooting Oswald; a copy of the latest contract wherein Dirk could have fled town for bigger lights, but stayed with the Mavs?

When I asked Mary, she said that it didn’t matter: Dirk had his ring, and that’s all that mattered in Dallas. When I asked her if she had any advice for the two sides, she said, “Shut up and play ball.”

Previously by Peter Richmond:
Al, the Raiders, and Me
Can Ryan Fitzpatrick Save Buffalo?
The Architecture of Disaster