A Knicks-Bucks Explainer for Our English Friends 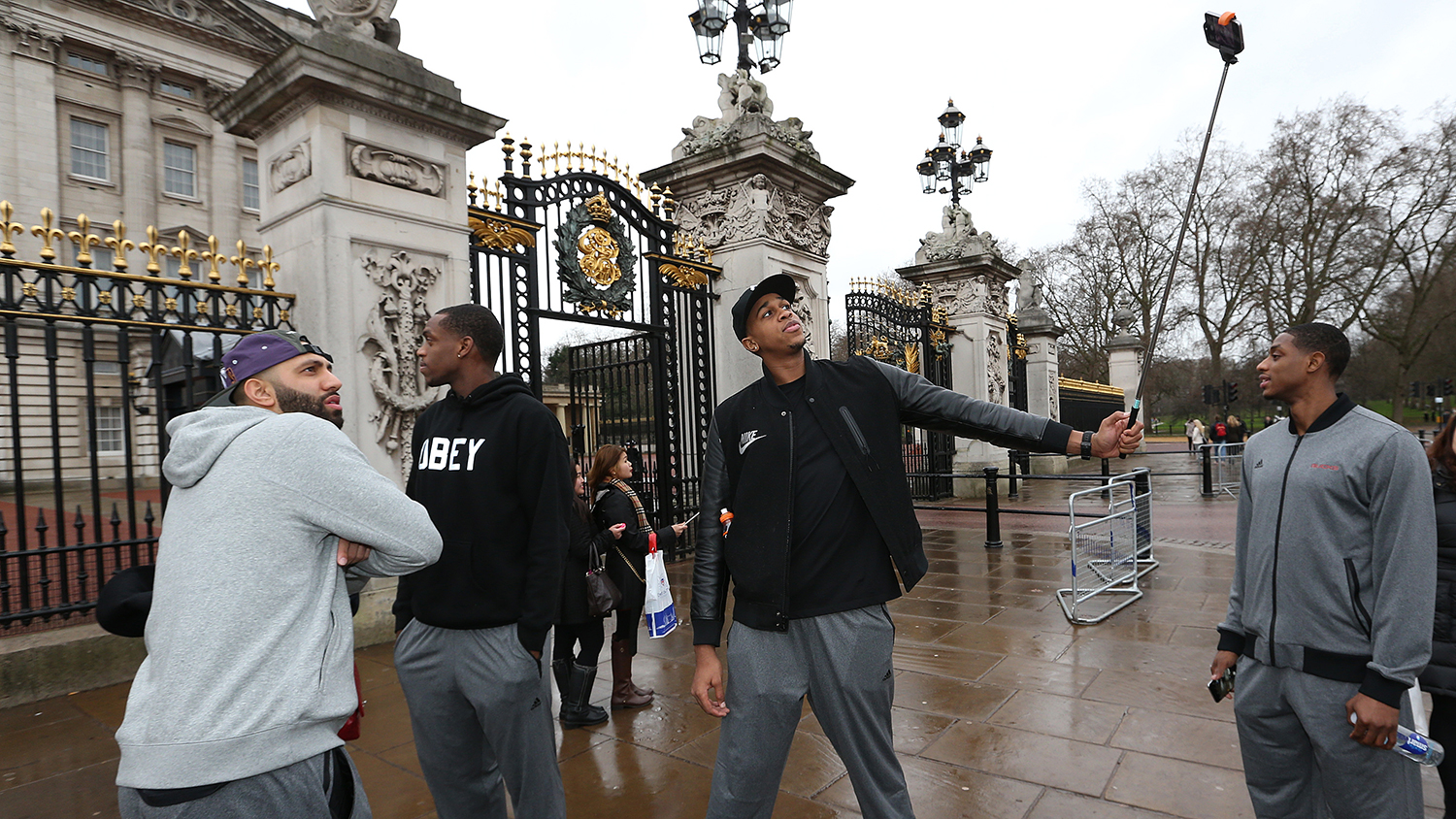 As you may or may not know, the Milwaukee Bucks and the New York Knicks, of my country’s National Basketball Association, will be playing what’s known as a “regular-season basketball game” at London’s O2 Arena on Thursday.

Now, I understand that the state of the sport of basketball in your country, at this particular moment, is akin to a patient languishing on life support who will never awaken from a vegetative state. Basketball’s popularity in England lags behind native sports like football (soccer), cricket, bandywickets, darts, Quidditch, hedgehog bowling, competitive alcoholism, pining for lost empire, and Viscount Nelson regattas — a kind of boat race involving tiny cannons, in which each member of the crew has an arm tied behind their back and is constantly screaming slurs against the French.

I get it. These are the sports that are close to your historical and cultural heart.

But look: Basketball was invented in 1891 by a Canadian in New England at an all-boys school. In other words, the sport is the product of two former colonies — one of which, to this very day, has a picture of your queen on its money — in a setting that forms the basis for, like, two-thirds of all British literature since the 19th century. This makes basketball as English as gray skies and teatime.

So, in order to foster a better understanding of the sport of basketball — which, I must stress again, is your birthright — I humbly present you with this English person’s guide to Bucks vs. Knicks.

Milwaukee is a city of about 600,000 people, located in the Midwestern state of Wisconsin. It is well known for its sausages. The word Wisconsin was appropriated, along with everything else, from one of the several Native American tribes that lived in the area before being herded onto reservations. Many of the European settlers of Wisconsin are of German extraction, thus the sausages. A buck is a male deer. Some of the Bucks players are ardent fans of the FIFA video game, and the team toured Chelsea FC’s Stamford Bridge just a few days ago. The team has an exciting young core, was recently purchased for $550 million by an ownership group comprised of hedge fund barons Wesley Edens and Marc Lasry, and already has five more wins than it had last season.

Taking their name from a style of baggy pants popular with the Dutch settlers of Manhattan, the Knicks are one of the NBA’s founding teams and are, at least by record, the very worst team in the league.

Recently, they traded away shooting guard J.R. Smith and young defender Iman Shumpert for a bunch of dudes not worth mentioning, for the purposes of clearing salary space and continuing to be a shit basketball team — but this time on purpose. This strategy is called “tanking,” and it increases the team’s odds of landing a high pick in the league’s annual player draft. This is basically like the dole for NBA teams.

As such, the Knicks may seem like an awful selection for league co-ambassador. But look again. Anyone who can manage to watch the Knicks play basketball without hurling themselves out of the nearest window will 100-percent-emoji be a lifelong fan of the game of basketball once his or her vision returns to normal.

A Greek national, the 6-foot-11 Antetokounmpo is in his second year with the Bucks and is averaging 11.7 points (these are like goals), six rebounds (collecting the ball after a miss), two assists (same concept as a soccer assist), and one block (when a player blocks a shot on goal) per game. In a league of extremely talented, gargantuan human beings, Antetokounmpo is notable for his breathtaking potential and freakishly long limbs. The length of his arms, when held perpendicular to his torso and measured from fingertip to fingertip (called “wingspan” in basketball parlance), is 2.26 meters. This has led to many on the Internet to openly wonder if Antetokounmpo really used a selfie stick to take these pictures, or if that is just legit how long his arm is.

He plays and lives with an unsullied joie de vivre that resembles a puppy romping through freshly fallen snow, running after the child who is his best friend. Giannis’s brother, Thanasis, plays for the Knicks’ D-League (like the Championship but way worse) team, the Westchester Knicks.

Anthony plays for the Knicks and is coming off the two best statistical seasons of his career, and he recently signed an extension with the team worth $124 million over five years. He has a lingering knee injury that will probably require surgery to correct. As the NBA uses a salary-cap structure that limits the dollar amount teams can spend on players, the Knicks and Anthony made much over Melo’s new contract being roughly $5 million less than the maximum allowed salary. This was akin to showing up to work with a mullet after your boss tells you to cut your hair. Anthony turned down less lucrative offers from several teams, most notably the Chicago Bulls and the Houston Rockets, to return to New York. This is the worst season in team history. Meanwhile, the Bulls and Rockets are possible NBA finalists.

I have compared this situation to the British-set film Sliding Doors, which starred one of England’s finest actresses, Gwyneth Paltrow. Melo met Prince Harry, a.k.a. “The Cool Prince,” yesterday, summing up the experience by saying, “It’s royalty. You can feel it.”

The Bucks head coach is a former point guard (the positional equivalent of a playmaking no. 10) and was one of the greatest players of his generation. As a player, he was known for his uncanny vision, creative passing, strong rebounding, genius-level understanding of the game, and his ability to quietly slip daggers between the ribs of his coaches. Ironic then, that he became a head coach himself. Even more surprising: He’s a good one.

Under Kidd, the Bucks have improved from the league’s second-worst defensive rating of 108.9 points surrendered per 100 possessions to a top-five mark of 99.7. The circuitous, plot-laden route Kidd took to join Milwaukee is one that any student of European history would enjoy, as it displays how ruthless on-court genius can seamlessly morph into treacherous political brilliance. It also featured a banishment and a shocking attempted coup.

No one knows what the triangle offense is, least of all the New York Knicks, whose players have called it “a struggle” and “almost too much thinking.” The triangle’s mystique of unknowableness and quasi-spiritual complexity flows from its most famous proponent, Knicks president Phil Jackson. Jackson won 11 titles as head coach of the Chicago Bulls and Los Angeles Lakers and two titles as a player for the Knicks in the ’70s. He has credited the Knicks’ second title, in 1973, to, in part, the revelations he uncovered inside of the infinite trans-universal headspace while tripping balls on a Malibu beach at sunset like a deleted scene from Inherent Vice. The Knicks are the fourth-worst offensive team in the league.

He is the second-highest-paid player in the NBA, and he bathes in red wine. Those are the two things he is most famous for.

The Bucks and the Knicks both play in the Eastern Conference, far and away the weaker of the two NBA conferences. The Bucks, with a record of 20-19, sit firmly in the gooey-soft center of the Eastern playoff standings, while the Phoenix Suns, who are clinging to the last playoff spot in the West, have a record of 23-18. I can think of no better way to inspire a love for basketball in a foreign land than to send a mediocre but improving team and an abysmally awful team to said land as exemplars of the greatest basketball league in the world. The NBA apparently looked at the Bucks’ 15-67 record from last season and the Knicks’ 37-45 mark from last year and decided, “Yes, send them to a country that barely likes basketball.”

A Deep Dive Into the NHL’s Pacific Division