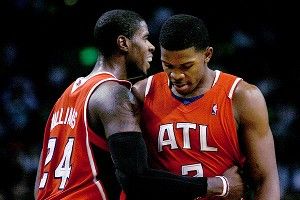 Hey, it’s Rembert Browne, Hawks fan. I’m writing to you today because you just got traded to Brooklyn, and that makes me slightly happy. Actually, let’s be real, I’m grinning from ear to ear. Sports-fan me hasn’t been this thrilled since we got Michael Vick, so that’s saying something, Joe.

Is this rude that I’m telling you this?

Anyway … a good portion of my elation stems from the fact that I’ll never see you in an Atlanta uniform again, but I’m also elated that you’re headed to Brooklyn, just a bridge crossing from my home in Manhattan.

You see, I was planning on you being in Atlanta for the rest of my 20s, so I had been pacing myself with the heckles I directed your way. When word got out that you might be traded, I could barely contain my excitement, but I knew it was the beginning of the end for us, and that was kind of sad. But upon learning that Brooklyn would be your new home, the sadness quickly disappeared. Now that you’re a 20-minute train ride away, I can continue to haunt you for years to come.

I use “haunt” in the most professional sense of the word. I’m not actually a ghost.

This all makes sense, right?

If it doesn’t, perhaps I should explain why we as a city are so pumped to see you go (Joe, we’re talking about having a parade).

I understand the game that is professional athletics and moving from city to city. It’s part of your job and there’s no way athletes are always excited about where they land (by choice or by force). Even still, you, the athlete who mysteriously found a way to make all the money, owed it to your city to pretend that you liked us. But you didn’t. Not even once.

There’s no way that we should be celebrating at the prospect of losing our most talented Hawk since Dominique, but we are and it feels great.

Did I mention the parade?

Sure, in response to boos you once said “we could care less if [fans] showed up,” and that made us dislike you even more. But that’s not the whole story. There’s more. Look at Mike Vick.

He was an equally so-so winner in Atlanta, but in the beginning he got us excited about football, he smiled at times, and he seemed to love being in Atlanta. Then things started not going so well, the wins weren’t happening as much, and, as we all know, he got in trouble, thus abruptly (and stupidly) ending the Mike Vick Era. On paper, we should never forgive him (many won’t), but to many (myself included) he’s still an Atlanta legend. Why? Because he convinced us that he cared.

Yes, one time Vick went as far as giving our fans the finger, and that was not looked highly upon.

Mike making a cameo in that video will never leave my heart. That’s called love, Joe. Love for the city and love for the culture. Yes, Vick probably wanted to be in that “Rubberband Man” video alongside Usher, but he didn’t have to. He did it because it was bigger than him being the Falcons’ quarterback. The real superstars understand that sports are bigger than just their sport, but you never took on that responsibility beyond being the Hawks’ shooting guard. It was a shame to watch, year in and year out. Vick was an important part of the culture, and he knew that. I think you knew you could have been like that, but actively chose not to. For that, I say good riddance.

I hope you don’t take this personally?

I look forward to seeing you in the fall. I’ll be the guy behind your bench in the Danny Ferry Cavaliers jersey, still screaming at you to shoot. This time, I just hope you’ll miss.

It’s not completely your fault. L8R.

Confessions of a Competitive (Ch)eater