Confessions of a Competitive (Ch)eater 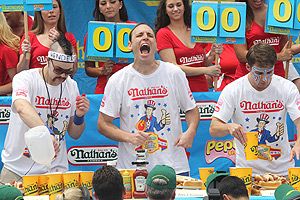 On July 4, tens of thousands of people will cram the corner of Surf and Stillwell avenues in Coney Island to witness grown men and women devour frankfurters in Nathan’s Famous July 4 International Hot Dog Eating Contest. In many ways, it is our country’s most barbaric spectacle.

The contest is reminiscent of a deleted scene from Game of Thrones, only with more PETA protesters and fewer dwarfs.

Perhaps I exaggerate the savage nature of the event because of sour grapes. The truth is that (and I really believe this in my plaque-infested heart) two decades ago, it’d be me — not Takeru Kobayashi, not Joey Chestnut — who could have headlined this celebration. 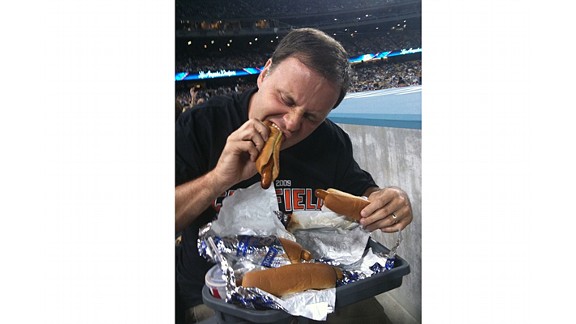 Let’s go back to the summer of 1993. I was fresh out of college, with no real plan. At least nothing that excited me. My choices were to work at a low-paying entry-level position on Wall Street buying and selling foreign currency or attend the crappy, local, barely accredited law school a couple towns over. Either way, I was confident whichever decision I made would be the wrong one.

As far as the immediate next few weeks were concerned, I had planned to live off whatever I still had saved up from my newspaper route from the mid-’80s. Hopefully I’d be able to parlay a few dollars on a winning horse at the local OTB so that I didn’t have to fill my gas tank ¾ of a gallon at a time. Yes — I was a loser.

I was a loser in need of something that could inspire me to become a relevant member of the community — something I could be proud of.

That’s where the Popei’s Challenge comes in. Popei’s was the local dive bar/restaurant a few towns over. They spelled the name that way so they wouldn’t get sued by the creators of the famous cartoon featuring the sailor man who gained his mythical strength from a can of spinach. Which is ironic, because I’m pretty sure not one Popei’s patron had ever seen a real can of spinach in his or her life.

Every Saturday night, Popei’s issued a challenge. They charged $36.95 for a bonanza consisting of 50 hot wings, two pounds of pasta, vegetables, scallops, mussels, clams, and a baked potato. And if you could finish it in under 90 minutes, they’d pick up the tab.

This is what I lived for. I had one passion, and that was eating. I loved it for necessity, for sport, and for pleasure. The plan was to do this at the end of the summer and I couldn’t fail.

Just like a marathoner would train by getting a few 10Ks under his belt, I went to smaller eating venues to hone my gluttonous skills.

A few weeks before the big day, I hit an all-you-can-eat shrimp buffet. I was Homer Simpson–esque, if I may say so myself. I fared very well up until the part where afterward I made my friends pull over on the side of the road so I could puke on a driveway — decorating it in a ‘90s scampi motif. I’ll never forget the words of the confused youngster looking out his front door: “Mommy, a man is throwing up in our driveway.” Some would’ve heard that, taken a step back, and ended their quest (and possibly their lives) right then. But not me.

The following week, my pals and I hit the Sizzler. Another massacre. I hit every station at least three times. When I was done, each food item — except maybe the chickpeas — was put on the endangered species list. This time, I had the wherewithal and common courtesy to refrain from vomiting on a stranger’s driveway — instead choosing to let it all go right there in the Sizzler parking lot.

I was ready. It was a Saturday night in late August. The plan was to first run our weekly mini-Sega hockey tournament at my house. After which my chums Darren, Sneaky Joe, Naabes, and Finkin would join me in my pilgrimage to Popei’s.

A number of mind games go on throughout the event. First of all they present the entire meal at once just to overwhelm you. Then — one by one the waitresses approach you and tell you how, in 375 combined years of serving, they’ve never seen anyone complete the challenge.

None of this was going to work on me. I was way too focused.

“Start the clock!” I exclaimed, as they dropped the last of the monstrous plates in front of me. I had 90 minutes — no timeouts. And unlike soccer — no injury time added at the end. So if I sliced my thumb opening a clam, that was my problem.

It really was an overwhelming amount of food. My plan was to attack one item at a time. First — the 50 wings. I knew this wasn’t going to present too much of a problem. I was familiar with Popei’s wing sauce, and during a dry run a few weeks before, I had devoured 75.

Also: I attended college in upstate New York. If you didn’t put down three dozen wings at orientation, they wouldn’t let you matriculate.

So the wings were done with. Fifty-eight minutes remaining. Time to move on to the seafood. This was the easiest part. The work of getting the slimy fish out of the shells was actually the most time-consuming element, but my buddies helped out, so it became a non-issue.

If the restaurant manager was smart, he would have crazy-glued the mussel shells shut — but he didn’t, and so with 46 minutes remaining, I only had the pasta, baked potato, and vegetables left.

I remember taking a big swig of my iced tea (with an ironic packet of Sweet’N Low) and ripping right through the baked potato.

Fourty-two minutes left — almost half the allotted time remained. This was going to be tough. I had saved the worst for last. Two pounds of pasta and an Italian peasant’s garden full of vegetables.

I would alternate. Forkful of vegetables. Forkful of pasta. I began sweating. One waitress could sense I was slowing down. “Ahh — you poor thing. You’re not going to do it.” More head games.

At the 1-hour-and-10-minute mark I busted through half the pasta and vegetables. On this evening, there would be no dessert.

Waitress no. 2 came over. “You gave it your best, son, congratulations,” she said. “Nothing to be ashamed of.”

Damn right there was nothing to be ashamed of, because I was going to finish this fucking thing.

At the 1-hour-and-15-minute mark, I had about a quarter pound of pasta and vegetables remaining and was sufficiently sick to my stomach.

Waitress no. 3. “We’re proud of you no matter what!” Now — I’m getting pissed. I’m convinced that last one wasn’t even a waitress — she was a hired all-you-can-eat-restaurant taunter. Sort of like the flunky version of William H. Macy’s character in The Cooler.

At this point my friends — who just a few hours before were cursing each other and me as I won the weekly mini-Sega hockey tourney (my house — I got to use the loose joystick and the Red Wings) — were fully in my corner. They were now more into this than I was, because they were the most supportive pals in the world. More importantly, they knew they’d have to pony up a good portion of the $36.95 if I failed.

There was 12 minutes left. I begin to figure it mathematically. Probably 25 to 30 more for forkfuls of pasta and vegetables. I was spent. It wasn’t happening.

No pep talk was going to put me over. Thirty-year-old Talia Shire could’ve dragged me to the beach and given me the “what’s the truth, dammit” speech and it wouldn’t have helped.

I was so delirious. It wasn’t physically possible to hold down even three more noodles and a stalk of cauliflower.

What a bummer! Imagine losing a competitive-eating contest because you didn’t finish your vegetables. Such a mixed message haunting you from your youth!

I may not have finished, but I’d be damned if I was paying for this mess. The fellas and I had a meeting. Everyone would play a part in this petty theft venture. Sneaky Joey and Naabes would go hit on the waitresses to keep them distracted. (I’m guessing they broke the ice by bragging about coming in second and third in our Sega tournament. Girls love that shit.)

Darren would be on the lookout for any suspicious-looking manager types. Finkin would sit there and not say a word because — I loved him — but he had a really big mouth, and if he ruined this for me I would murder him in his Honda del Sol on the way back home.

There were six minutes left when I noticed a thriving plant next to my table. Suddenly my resourceful instincts kicked in. These vegetables would become one with the plant. My finest camouflaging work ever. I was a regular General Petraeus. OK, more like General Pathetic. I didn’t care. I was on a mission, and half my problems were solved.

Now for the leftover pasta. I had to get rid of it. There was only one option. My shoes. My two-day-old Nike high tops would have to pay the price for my appetite’s shortcomings. I slipped them off and slyly shoved the leftover linguine into the shoes. There … done. Darren and Finkin started the applause. Naabes and Sneaky Joe stopped hitting on the waitresses as they all came over at once.

Waitress 1: This is unbelievable!

Manager: We need to take a picture.

Sal: No … thanks. No picture. I need to get out of here before I throw up all over your already-horrified customers.

Finkin: He’s not kidding — he throws up a lot.

My buddy Darren led me out the front door as the others squared the rest of the bill.

I left triumphantly — linguini sprouting from my brand-new shoes. On the way home I was forced to toss the new duds out the window. I scored pretty well in the math part of my SATs, but it was all for naught on this night as I sacrificed a $75 pair of Nike high tops for a $36.95 meal.

And there you have it. In conclusion — I’m not saying Joey Chestnut isn’t worthy of all the praise he receives from the competitive-eating community. I’m just saying someone needs to check his shoes for pork byproducts on his way out.