91-Day NFL Warning: Brian Orakpo Is Back, and He Looks ‘As Good As Ever’ 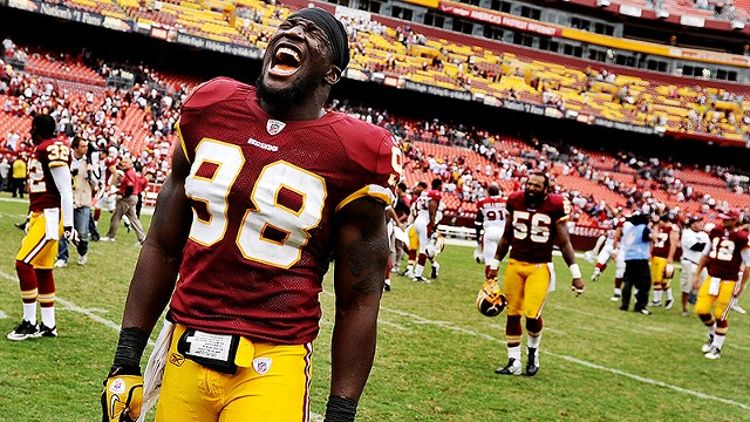 It didn’t matter much, not with all the Robert Griffin magic and the surprise playoff trip, but long before the Redskins’ best offensive player went down for the season, their best defensive player was already gone. Brian Orakpo played just one full game for Washington last year, suffering a torn pectoral muscle in Week 2 against St. Louis, which cost him the rest of 2012. The Redskins rode Griffin and their offense for much of the year, but while their quarterback’s path back to health will be paramount, Orakpo’s return changes the complexion of Washington’s defense.

In 2011, Orakpo’s third season, the outside linebacker finished the season with nine sacks — less than half the total of that season’s sack king, Jared Allen. Teased out, though, the numbers show that Orakpo’s year ranks alongside Allen’s, and just about anyone else’s. His 49 combined hits and hurries were just two fewer than DeMarcus Ware’s total, according to Pro Football Focus. Orakpo had 12 fewer pressures than Ware and 22 fewer than Cameron Wake (who led all 3-4 outside linebackers), but he also rushed the passer less often. According to PFF’s numbers, Orakpo came on just 74.4 percent of pass plays, a rate almost 10 percentage points lower than Ware. Overall, it leaves their pass-rushing production at about the same level.

That’s the player Washington missed out on last year, and it lost him just as his pass-rush mate emerged as one of the best 3-4 outside linebackers in football. Ryan Kerrigan was second among players at the position with 69 total pressures a year ago, and his season was good enough to get the 24-year-old to the Pro Bowl.

The Redskins’ pass defense struggled last year, but that doesn’t entirely fall on the secondary. Free-agent signing E.J. Biggers should be an upgrade at corner, but the best addition to the back end of Washington’s defense will probably come up front. With a sack rate that ranked 25th a year ago, quarterbacks had plenty of time to attack Washington down the field — time they won’t have when offensive lines are unable to slide protection schemes one way or the other.

Mike Shanahan’s comments from last week that Orakpo is back and looking “as good as ever” is the best non-RG3-related news a Redskins fan could get these days. And if Orakpo didn’t have incentive enough to have a big year following a missed one, that he’s playing for a new deal might help. The Redskins spent two first-round picks in three years on Orakpo and Kerrigan with the vision they would spend the next decade meeting each other at the quarterback, and with Orakpo back, that has a chance to be a reality.

In Which Bob Stoops Forgets It Is Not Called Feelingsball

A Brief History of George: Why Karl Is Out in Denver and Where He May Be Headed