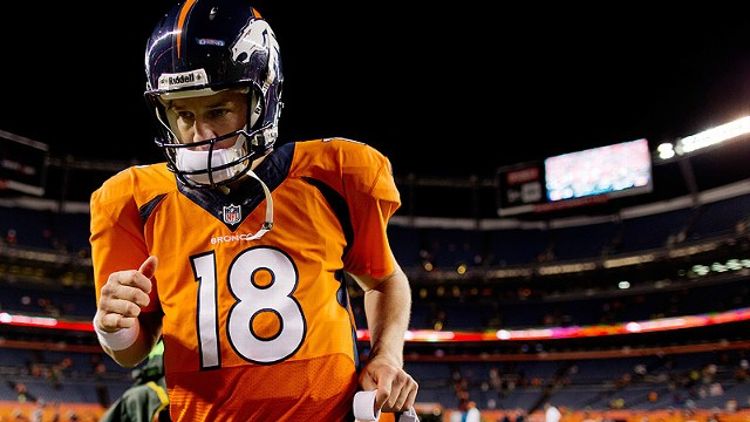 What’s that? You were wondering exactly how many days until the start of the NFL season? Well, you’re in luck! We here at the Triangle are set to spend the next couple weeks providing a daily reason to get excited about pro football’s return.

I don’t know who’d want to admit it now, but a year ago, we were all wondering about Peyton Manning. The individual apprehensions all differed slightly — his age, multiple neck surgeries, his fading arm strength, the Broncos’ dome-free, mile-high accommodations — but they all combined to form one central theme: Is Peyton Manning still Peyton Manning?

The answer to that question didn’t come right away. Manning’s three interceptions against Atlanta in the Broncos’ Week 2 loss were a win for the more skeptical among us. The rest of the season was not. Two weeks later, Manning started a streak of five games in which he threw for at least 290 yards and three touchdowns while completing no less than 70 percent of his passes. At season’s end, Manning’s completion percentage (68.6) was the best in the league and the second-best figure of his career. His average yards per attempt (8.0) were higher than they’ve been since 2004. Manning finished behind only — who else — Tom Brady in both DYAR and DVOA.

Detractors will point to another early-playoff loss, but if Rahim Moore covers Jacoby Jones, that’s not a conversation we’re having. And even now, it’s not the one we should be. All Peyton Manning did last year was be Peyton Manning, despite how many of us wondered if he could. In one year, the preseason evaluation of the Broncos has gone from “Can Peyton Manning be great again?” to “Just how great does Peyton Manning have to be?”

Denver opened as the Super Bowl favorite in Las Vegas, and despite losing Von Miller — one of the two or three best defensive players in the league — for six games, their 5/1 odds remain the best. Bill Barnwell looked at all of Denver’s injury and suspension issues last week on Grantland, and beyond Miller, they’re still significant.

All of this eventually comes back around to Peyton Manning. The Broncos are Super Bowl contenders because of Manning, let alone the Super Bowl favorites. And although Miller will be back by the time it matters, the reason that 5/1 figure hasn’t budged is because of who’s under center. Any talk that was paused during the 2011 season of where Peyton Manning belongs in history is all in play again. Three more 4,000-yard, 25-touchdown-pass seasons will likely give Manning the career marks for each, but the Greatest Ever résumé point that would matter most is one more Super Bowl. Even with the concerns on Denver’s defense, Manning’s receiving corps may be the best one he’s ever had, and the Broncos still have enough to be considered the best team in the AFC. Anyone that wants to bet against Peyton Manning is obviously free to, but I’ve learned my lesson.

CourtVision: What Does Antawn Jamison Bring to the Clippers?

About Last Night: Fear the Cubs