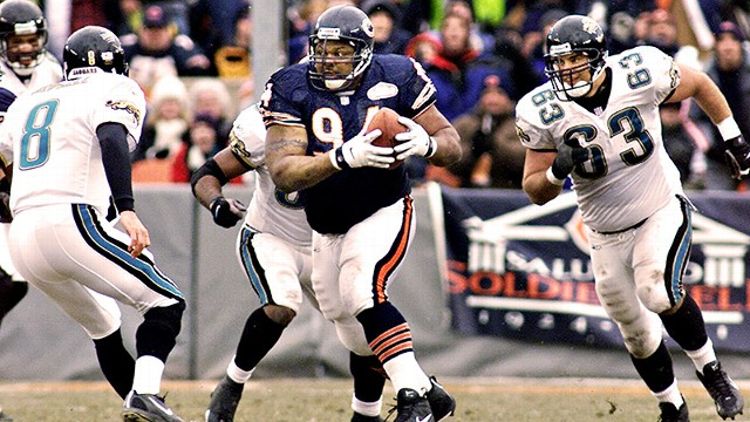 Like most great things, the fat-man touchdown was born from a combination of opportunity and a desire for revenge. In his team’s 23-0 blowout of the Bears in the 1984 NFC Championship Game, 49ers coach Bill Walsh decided to use guard Guy McIntyre as a blocking back near the goal line. Mike Ditka saw this as an attempt at mockery (because of course he did), and it was there at Candlestick Park that Ditka vowed to one day have his vengeance.

He’d get it the next season, when the Bears drafted 300-pound-but-could-still-dunk-a-basketball defensive tackle William Perry in the first round. When Chicago visited the 49ers in Week 6 of the 1985 season, the seldom-used Perry wasn’t just unleashed as a fullback, he got two carries — neither of them near the goal line. The next week, on Monday Night Football against Green Bay, Perry would score his first touchdown, and the legend of the Refrigerator was born.

As John Madden so astutely pointed out in the classic film The Replacements, we love seeing a fat guy score. It’s with that in mind that we decided to put together a list of some all-time-great fat-guy-with-the-ball moments (often, they don’t make it all the way to the end zone, but those runs are just as enjoyable). Each is scored out of 72 on what I’m deeming the Fridge Scale. I won’t get into the specifics of the scoring system, but just know it’s based on a combination of athleticism, jiggle, and overall style. (Leon Lett, in all his style, gets a 5.)

We’ll start with this classic Keith Traylor moment from the Bears’ win over Jacksonville — partly because reader Samahn reminding us of this video was the inspiration for this list, and partly because I was in the building for this play, and it remains one of the greatest moments of my life.

1. The hands! He tips it twice before pulling it in.
2. What I remembered at the time, and what is evident in the video, is how desperately Keith is trying to get rid of the ball. For the final 15 yards, he tries to hand it to about three different guys.
3. This was the most memorable play from the 2001 Bears season. It should be noted that season also included back-to-win overtime wins on defensive touchdowns, the second of which came only after a Hail Mary tied the game on the final play. That’s how great fat-guy interceptions are.

That he didn’t get to the end zone hurts him, but the uniform does a lot to make up for it.

There’s no lateraling here. Not even a thought of it. Shaun Rogers has got this. Rogers was always listed at something like 350, but I never bought it. This is something close to 400 pounds of man rumbling toward the end zone with absolute certainty.

Big points for the stiff arm, obviously, but the best part here is that in his leap over the goal line, he doesn’t actually leave the ground.

I’m torn on this one. Even watching this video makes me want to pour scalding hot coffee in my lap, but there’s no denying it’s a great play. While Rogers read the screen perfectly in the play above, Raji is actually dropping into coverage here — a big ask for a big man. At the same time, it’s because of this play that we were forced to live with 15 of these every fucking Sunday:

I can’t just forgive the commercial. It was too dark of a time for all of us. It’s buoyed by coming in a Bears-Packers game, the same matchup in which the Fridge debuted, but I’m still really bitter about that entire afternoon (I’m guessing I kept The Other Side’s lights on for at least a year with my tab from that game).

Note the change in ball-security method halfway through the play. That’s all we need to know to understand Dan’s mind-set here. He goes from Please don’t fumble, please don’t fumble to I will forever live in glory in about five yards.

The five best things about this video:

On the Fridge Scale: 0

How well Wilfork reads the screen here is enough to make this an all-time great, but just take a look at the concentration. This man is an ath-lete.