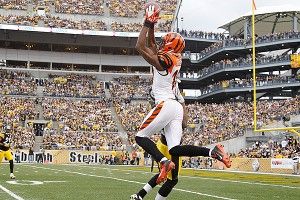 
The above play is part of this eight-minute package of Green catches, and it’s definitely my favorite of the bunch. There are so many things in here that all 47 Bengals fans can get excited about. First is just about everything Andy Dalton does on this play. The pass rush gets to him in less than a second, and he still manages to step up in the pocket and throw a 50-yard strike without setting his feet. The ball couldn’t be more perfect. I’ve watched this 15 times, and I still have no idea how this happened.