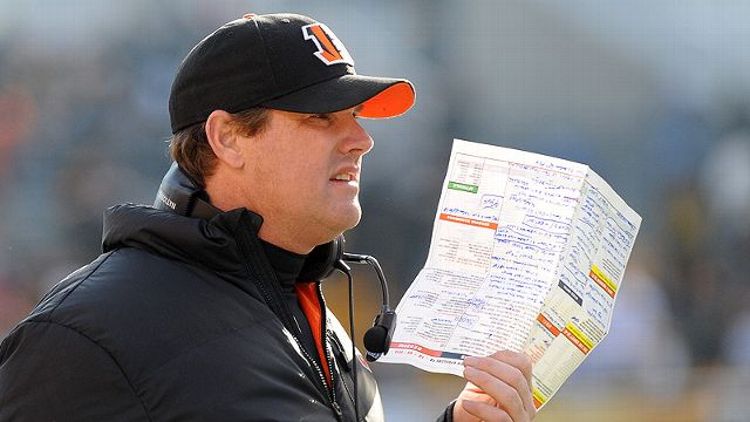 Earlier this morning, the news broke that Washington had found its new head coach, in the form of Bengals offensive coordinator Jay Gruden. The first question — one that Twitter has asked many times today — is what part Gruden’s last name plays in all this. Washington is coming off a horror-show season, featuring an offensive coordinator that owes half his DNA to the head coach, so some folks might be wary of getting tied up with famous families.

On its own, Gruden’s résumé isn’t exactly overwhelming. In his three years as coordinator, the Bengals’ offense finished 17th in DVOA each year. It’s actually hard to maintain that type of mediocrity. Back in 2011, as a first-year play caller with a rookie quarterback and a very young offense, a middle-of-the-pack finish was probably expected. This year, few offenses had more talent than Cincinnati, and no team had a better offensive line.

The lack of improvement is troubling. And although it’s hard to separate Gruden’s performance from his quarterback’s, Andy Dalton was allowed to sling it around pretty frequently this season — often, in the eyes of Gruden’s critics, at the expense of a very capable running game. The Chargers were reportedly not impressed with Gruden’s game plan last week, and I don’t think they’re alone.

These are all legitimate concerns, but one counter is that success as an NFL coordinator isn’t always a great indicator of success as a head coach. Gruden’s body of work as an O.C. isn’t staggering, but that doesn’t mean he isn’t qualified. Two of the more successful first-year coaches in the league this year were unconventional choices with unconventional backgrounds. Chip Kelly cut his teeth at New Hampshire; Marc Trestman’s career highlights were two Grey Cup wins. Kelly and Trestman are their team’s primary play callers, but there are enough examples of coaches not hailed as schematic geniuses that have done just fine. There just isn’t a formula for who will win and why.

Gruden’s latest stop may have been as an NFL offensive coordinator, but his path there was about as weird as it gets. A majority of his coaching experience comes from the Arena League and UFL. One of the greatest Arena Football players ever, he once stepped down as a head coach to come back out of retirement and play. Gruden’s history is about as different from Mike Shanahan’s as one can be, and maybe that’s not a bad thing.

People in this organization know Jay Gruden, and he knows them. General manager Bruce Allen held the same position in Tampa Bay when Gruden was an offensive assistant under his brother — and it doesn’t stop there. NFL Network’s Jeff Darlington is reporting that Jim Haslett will remain Washington’s defensive coordinator; Haslett was the head coach of the Florida Tuskers during Gruden’s season as their offensive coordinator. The favorite to become Washington’s offensive coordinator, Sean McVay, also worked with Gruden in the UFL, and Raheem Morris, the team’s secondary coach, also crossed paths with him in Tampa Bay.

Hiring Gruden is a way to keep the majority of the staff intact while bringing in a boss familiar with the pieces. Whether this is the smart move remains to be seen. Haslett’s defenses have been a series of Dumpster fires in Washington, but he’s had very little to work with. Sean McVay is four years older than his 23-year-old quarterback and has never been a coordinator at any level. For as much of a disaster as this past season was in Washington, it was only a year removed from the masterful job the Shanahans did with the offense in 2012. This is a team that’s a long way from fielding a top-level defense, and it will be on Gruden to make sure Robert Griffin III and his offense are good enough for Washington to compete.

How that offense will differ from Shanahan’s is the question. Traditionally, Shanahan is a West Coast guy with a zone-stretch running scheme that turns the Olandis Garys of the world into gods. But for the past two seasons, his offense has been a Dr. Krieger–worthy mutation of several different schemes. As Chris B. Brown noted last month on Grantland, Washington ditched a lot of the Baylor-inspired sets that made them so potent last year in favor of the stretch running game and a lot of bunch passing formations.

Saying Gruden and Shanahan both run a West Coast passing game is like saying people from the U.S. and England both speak English. Core principles and some terminology may be the same, but there are plenty of distinguishing traits. The good news for Griffin is that he won’t have to start from scratch.

The most significant change may actually be in what Washington does up front. Shanahan’s zone-blocking scheme is famous, and for as fancy and newfangled as some of Washington’s formations looked over the past two years, the way they blocked wasn’t all that different from what we saw back in Denver. Gruden’s Bengals tended more toward power and man schemes that saw a lot of pulling.

There are a few possible solutions here. Washington’s passing game was a mess this year, but they were still ninth in rushing DVOA — and that was with Griffin as only a marginal threat as a runner. Their line and Alfred Morris are built to zone block, and the smart move may be keeping the continuity of that scheme. Alternately, Gruden isn’t unfamiliar with read plays (Cincinnati actually ran one as recently as last week’s game against the Chargers), and teams like the 49ers have smoothly combined them with a power-blocking scheme. The league seems to be trending away from those plays, but it’s good to know that Gruden’s hiring doesn’t preclude Washington from using them.

Gruden’s contract is reportedly for five years — a rarity for someone with no previous experience as a head coach. That could be seen as an indication of how badly Washington wanted him, but it could also be a sign of what Gruden needed in order to come there.

I’m sure there’s an allure to being the head coach of this team, with the Lombardi trophies sitting in the lobby and the facilities that come with one of the world’s most valuable franchises. They don’t have that in Cincinnati. But you’d have to be sort of nuts to willingly step into this, right?

That’s a link to Sally Jenkins’s Washington Post column from earlier this week, in which she refers to Griffin as a “boy emperor” who has “alienated his receivers and members of the offensive line.” As for Dan Snyder, “boy emperor” would be the nicest thing anyone’s called him in a while.

The perception of the job in Washington is that Snyder’s loyalty to Griffin has given a quarterback just finishing his second season too much power and too high of a standing in both the locker room and organization. There may be some truth to that, but the idea that a new head coach’s downfall will be tied to focusing too much on his quarterback seems off. The success of a head coach is almost always tied to his quarterback. Jay Gruden’s future in Washington won’t be about Robert Griffin having too much or too little power. It will be about whether Gruden can turn Griffin into a player deserving of that power.